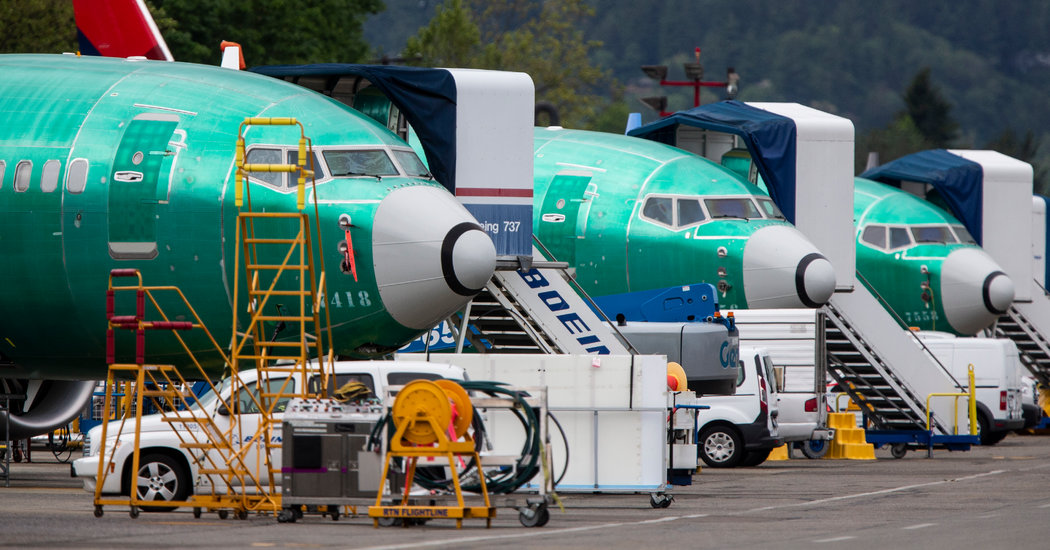 Since the two fatal crashes of the Boeing 737 Max, airlines around the world have moved to buy flight simulators to train their pilots.

Boeing recently discovered that the simulators could not accurately replicate the difficult conditions created by a malfunctioning anti-stall system, which played a role in both disasters. The simulators did not reflect the immense force that it would take for pilots to regain control of the aircraft once the system activated on a plane traveling at a high speed.

The mistake is likely to intensify concerns about Boeing, as it tries to regain credibility following the crashes of Lion Air and Ethiopian Airlines flights. In the months since the disasters, Boeing has faced criticism for serious oversights in the Max’s design. The anti-stall system was designed with a single point of failure. A warning light that Boeing thought was standard turned out to be part of a premium add-on.

“Every day, there is new news about something not being disclosed or something was done in error or was not complete,” Dennis Tajer, a spokesman for the American Airlines pilots union and a 737 pilot.

The training procedures have been a source of contention. Boeing has maintained that simulator training is not necessary for the 737 Max and regulators do not require it, but many airlines bought the multimillion-dollar machines to give their pilots more practice. Some pilots want ongoing simulator training.

The flight simulators, on-the-ground versions of cockpits that mimic the flying experience, are not made by Boeing. But Boeing provides the underlying information on which they are designed and built.

“Boeing has made corrections to the 737 MAX simulator software and has provided additional information to device operators to ensure that the simulator experience is representative across different flight conditions,” said Gordon Johndroe, a Boeing spokesman. “Boeing is working closely with the device manufacturers and regulators on these changes and improvements, and to ensure that customer training is not disrupted.”

In recent weeks, Boeing has been developing a fix to the system, known as MCAS. As part of that work, the company tried to test on a simulator how the updated system would perform, including by replicating the problems with the doomed Ethiopian Airlines flight.

It recreated the actions of the pilots on that flight, including taking manual control of the plane as outlined by Boeing’s recommended procedures. When MCAS activates erroneously, pilots are supposed to turn off the electricity to a motor that allows the system to push the plane toward the ground. Then, pilots need to crank a wheel to right the plane. They have limited time to act.

On the Ethiopian flight, the pilots struggled to turn the wheel while the plane was moving at a high speed, when there is immense pressure on the tail. The simulators did not properly match those conditions, and Boeing pilots found that the wheel was far easier to turn than it should have been.

Regulators are now trying to determine what training will be required.

When the Max was introduced, Boeing believed that pilots did not need experience on the flight simulators, and the Federal Aviation Administration agreed. Many pilots learned about the plane on iPad. And they were not informed about the anti-stall system.

The limited training was a selling point of the plane. It can cost airlines tens of millions of dollars to maintain and operate flight simulators over the life of an aircraft.

Following the first crash, Boeing gave airlines and pilots a full rundown of MCAS. But the company and regulators said that additional training was not necessary. Simply knowing about the system would be sufficient.

In a tense meeting with the American Airlines pilots union after the crash, a Boeing vice president, Mike Sinnett, said he was confident that pilots were equipped to deal with problems, according to an audio recording review by The New York Times. A top Boeing test pilot, Craig Bomben, agreed, saying “I don’t know that understanding the system would have changed the outcome of this.”

Since the Ethiopian Airlines disaster in March, lawmakers and regulators are taking a closer look at the training procedures for the 737 Max, and whether they should be more robust. At a congressional hearing this week, the acting head of the F.A.A., Daniel Elwell, testified that MCAS should “have been more adequately explained.”

Boeing said on Thursday that it had completed its fix to the 737 Max. Along with changes to the anti-stall system, the fix will also include additional education for pilots.

The company still has to submit the changes to regulators, who will need to approve them before the plane can start flying again. The updates are not expected to include training on simulators, but the F.A.A. and other global regulators could push to require it.

“The F.A.A. is aware that Boeing Co. is working with the manufacturers of Boeing 737 MAX flight simulators,” a spokesman for the agency said in an emailed statement. “The F.A.A. will review any proposed adjustments as part of its ongoing oversight of the company’s efforts to address safety concerns.”

Airlines have already been pushing to get more simulators and develop their own training.

Pilots at American Airlines, which began asking for simulators when they started flying the planes, ratcheted up their requests after the Lion Air crash. Regardless of what the F.A.A. requires, the union believes pilots should get the experience.

“We value simulators in this situation,” said Mr. Tajer. “It’s not a condition of the Max flying again, but it is something we want.”