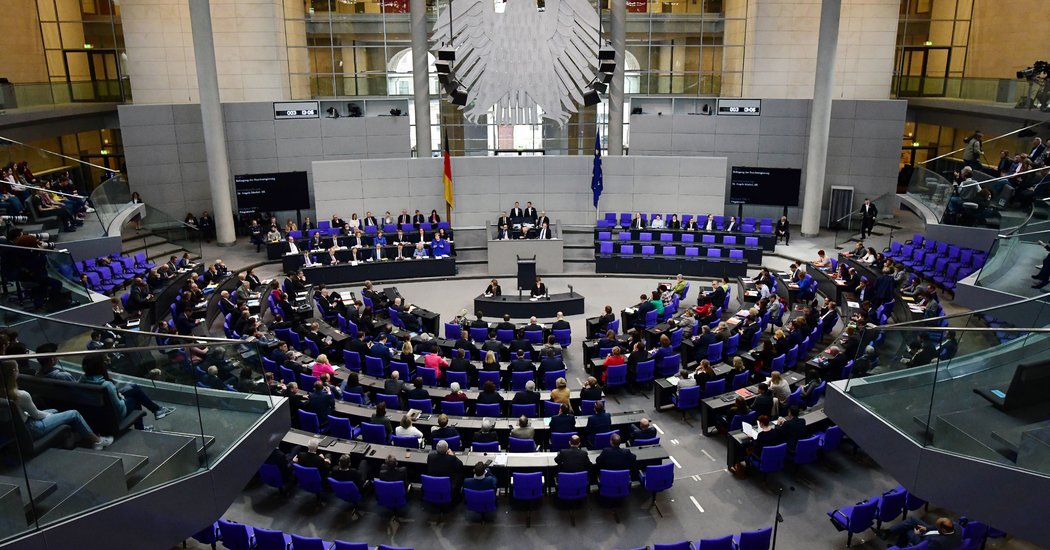 BERLIN — The German Parliament on Friday became the first in the European Union to pass a symbolic resolution that designates the Boycott, Divestment and Sanctions, or B.D.S., movement against Israel as anti-Semitic.

The nonbinding vote said the campaign to boycott Israeli products, along with the movement’s “Don’t Buy” stickers, recalled “the most terrible chapter in German history” and revived memories of the Nazi motto “Don’t buy from Jews.”

“The pattern of argument and methods of the B.D.S. movement are anti-Semitic,” the resolution stated, vowing not to fund any organizations that question Israel’s right to exist, call for a boycott of Israel or actively support B.D.S.

B.D.S., which was inspired by the South African anti-apartheid movement, has had several recent successes. In 2018, nearly two dozen artists pulled out of a music festival in Israel. Most recently, the B.D.S. movement has called on artists and fans to boycott the Eurovision Song Contest because Israel is the host.

The resolution, which mentioned “growing unease” in the German Jewish community as anti-Semitism has increased, was brought to Parliament by Chancellor Angela Merkel’s conservative Christian Democratic Union party and its Social Democratic coalition partner, as well as the liberal party and the Greens.

Crime statistics published by the German Interior Ministry on Tuesday showed that anti-Semitic crime and hate crime rose by 20 percent last year. The report found that nine in 10 anti-Semitic offenses were committed by people on the far-right.

The Palestinian B.D.S. National Committee said in a statement Friday that it “rejects all forms of racism, including anti-Semitism” and condemned what it called an “anti-Palestinian, McCarthyite and unconstitutional resolution passed by the German Parliament.”

“We call on people of conscience in Germany and beyond to defend the sanctity of universal human rights and freedom of expression by protecting the right to B.D.S.,” the statement read. “The academic and cultural boycott of Israel is strictly institutional and does not target individual Israelis.”

There were other critics, too. Some 60 academics signed an open letter, saying the motion formed part of a worrying trend of “labeling supporters of Palestinian human rights as anti-Semitic.”

It said the mixing of B.D.S. and anti-Semitism was supported by “Israel’s most right-wing government in history” and formed part of a strategy to delegitimize any attempt at international solidarity with the Palestinian cause.

But Prime Minister Benjamin Netanyahu of Israel congratulated Parliament, known as the Bundestag, on its “important decision to recognize B.D.S. as an anti-Semitic movement and that it is forbidden to support it.”

“I particularly appreciate the Bundestag’s call on Germany to stop funding organizations that work against the existence of the State of Israel,” Mr. Netanyahu said, “I hope this decision will lead to concrete action, and I call on other countries to adopt similar legislation.”

Yuli Edelstein, the speaker of the Israeli Parliament, tweeted: “Thank you #Bundestag! For the courageous and important decision! BDS is a dangerous, antisemitic movement. You are the first, but many others will follow in your footsteps.”

The far-right Alternative für Deutschland had put forward a separate motion on Friday that called for a ban of the B.D.S. movement.

One of its lawmakers, Jürgen Braun, said his party was the real friend of Israel in the German Parliament. “Anti-Semitism comes from the left and from Islam,” he said.

The AfD abstained in the vote.

The Left Party also said it rejected the B.D.S. movement, but it refused to back Friday’s motion. In its own motion, the party called on the government to support efforts to find a peaceful two-state solution in the Middle East.