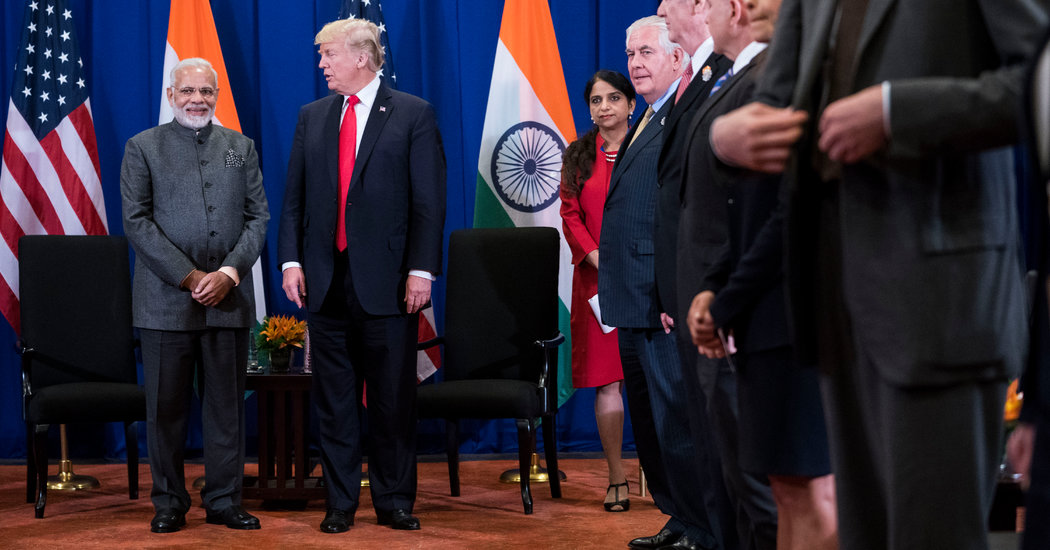 MUMBAI, India — President Trump has made India the latest target in his widening global trade war, but the country’s newly re-elected prime minister, Narendra Modi, has bigger problems to address.

On Friday — the first day of Mr. Modi’s second term, and the same day the White House terminated a special trade status for India — the Indian government had reported that the country’s economy was growing at the slowest rate in five years and that unemployment was at a 45-year peak.

Mr. Modi and his new ministers responded with two acts that illustrated their top priority: reinvigorating the Indian economy.

With farmers suffering across the country, the first act of the new cabinet was to extend a program of cash handouts to cover 20 million more farm workers — a sector that Mr. Trump wants to open to more competition from American growers.

The second was to create a pension system for small traders, a group battered by competition from India’s leading e-commerce sites, which are owned by the American giants Amazon and Walmart.

“What the U.S. is trying to do is bully India on certain issues where India cannot take a decision in favor of the U.S.,” said Ashwani Mahajan, a leader of the Swadeshi Jagran Manch, a populist organization affiliated with Mr. Modi’s party. The group has pushed the government to pass policies favoring small Indian companies and farmers over foreign multinationals.

The termination of the special trade status, which had eliminated tariffs on a small portion of India’s exports to the United States, had long been expected. The move, taken late Friday, was seen as the Trump administration’s way to break a monthslong impasse in trade talks.

But like Mr. Trump, Mr. Modi has embraced nationalist language and policies. Neither leader is likely to bend soon, and the Indian government made clear on Saturday that it would put its own country’s interests first.

“We have significant development imperatives and concerns, and our people also aspire for better standards of living,” the Ministry of Commerce and Industry said in a statement. “This will remain the guiding factor in the government’s approach.”

Mr. Trump’s move against India closely followed another volley in his administration’s trade war, a hemisphere away. On Thursday, Mr. Trump said he would impose a 5 percent tariff on all imported goods from Mexico beginning June 10, and threatened to raise those tariffs if Mexico did not take action on undocumented migrants traveling toward the United States.

While Mexican officials were largely surprised by the announcement, Indian leaders were anticipating the trade action from the Trump administration, which had been considering it for a year.

The end of the preferential trade status, which takes effect Wednesday, will not in itself have a major economic impact in India.

India exported $83.2 billion in goods and services to the United States in 2018, but just $5.6 billion benefited from the zero-tariff designation for certain developing countries, known as the Generalized System of Preferences. The main industries affected will be textiles, jewelry and auto parts.

Trump administration officials view the move as delivering on their promise to rewrite the trade rules for countries they believe have not sufficiently opened their markets to American producers.

“Mr. Trump is ticking all the boxes, basically: China done, Japan alerted and now India,” said Harsh V. Pant, a professor of international relations at King’s College London. “With this decision, Mr. Trump is getting into election mode.”

In India’s case, the administration is seeking stronger protections for American companies’ intellectual property; lower tariffs on imported medical devices and electronics; the opening of India’s markets to American dairy products; and an easing of India’s recent protectionist measures against American technology and financial companies.

Mr. Trump has focused particularly on India’s high tariffs on imported Harley-Davidson motorcycles. And senior trade officials want to close the $24.2 billion trade deficit the United States had with India in 2018.

“The U.S. expectation is now that the election is over, Modi can do more on subsidies,” said Sreeram Chaulia, dean of the school of international affairs at O.P. Jindal Global University outside New Delhi.

At the same time, with Mr. Trump poised to begin his own re-election campaign, “the U.S. wants to be seen as militant on trade to appeal to the base of Trump,” Mr. Chaulia said. “They are not backing down.”

Mr. Modi, who campaigned on a nationalist platform, is under pressure from his backers to protect Indian companies and jobs.

Some of India’s largest manufacturers are smarting under Mr. Trump’s tariffs on their aluminum and steel, while mom-and-pop stores complain they are losing customers to Amazon.

The country’s internet companies, including the telecommunications giant Reliance Jio, are pushing the government to curb the power of American tech giants like Facebook and Google, whose services dominate Indian smartphones even more than they do American ones.

India is also chafing at the American trade embargo on Iranian oil. India and Iran have a centuries-old trade relationship, and India says oil from Iran is a bit cheaper than from other countries.

In recent months, India has raised tariffs on certain categories of imported products, and it has threatened to impose tariffs on American nuts, apples and finished metal items.

Still, as Mr. Modi tries to revive his country’s sluggish economy, his administration will have to court some of the same foreign manufacturers and investors that are pressuring the Trump administration to take a tougher line with India.

Rajiv Kumar, the vice chairman of NITI Aayog, an agency that helps the Indian government plan and execute major projects, said the government is likely to announce a series of “big bang” moves over the next 100 days to make India a more attractive place to do business.

“We have to focus on accelerating growth,” Mr. Kumar said. “We have to make the investment climate as friendly as possible, to deliver on what the prime minister has promised and replace the red tape with the red carpet, both for domestic and foreign investors.”

Much of the burden for finding common ground will fall on India’s new external affairs minister, the career diplomat Subrahmanyam Jaishankar.

A former ambassador to the United States and to China, Mr. Jaishankar led years of delicate negotiations with the United States over civilian nuclear development, navigating treacherous politics in both countries to reach an agreement.

“Jaishankar is going to try to cut a bilateral deal with Trump,” Mr. Chaulia predicted. “The problem with Trump is that no deal is a done deal.”