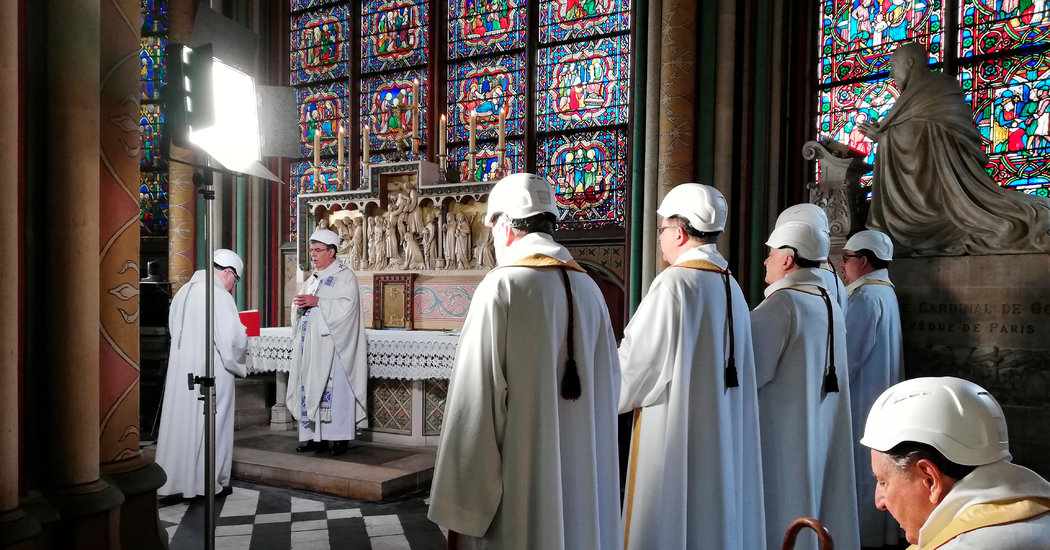 PARIS — Priests in robes and hard hats worshiped Saturday at the Cathedral of Notre-Dame in the first Mass there since the French treasure was devastated by fire in April.

The priests were joined by a handful of workers and other worshipers, also in hard hats. The group was limited to about 30 for security reasons, and the solemn ceremony in Paris was shown live by a Catholic channel via YouTube.

The Mass was held in the Chapel of the Virgin, just off the choir. Visible as the camera panned across were a pile of charred timbers, all that remains of the attic’s interlocking wooden beams, and great gaping holes in the vault, caused in part by the spire’s fall.

Notre-Dame’s reconstruction is underway, though officials say the edifice is still being shored up. About 150 people now work at the site.

The country’s culture minister, Franck Riester, said Friday on French television that the cathedral was still “in a fragile state,” noting that the vault — the soaring, self-supporting interior arches — had not been secured and could still collapse.

Donations for the rebuilding continue to come in, though only a fraction of the $950 million pledged has been received.

The archbishop of Paris, Msgr. Michel Aupetit, made only oblique references to the disaster as he celebrated the Mass, saying, “Those who are working on the construction tell me of their enthusiasm.”

In his message to the worshipers he likened that fervor to that of the original builders in the 12th and 13th centuries.

Saturday’s Mass was held on a symbolic day for the battered cathedral, which remains closed to the public. It marked the consecration of Notre-Dame’s altar, typically celebrated every year.

The great plaza in front of the cathedral is also closed to visitors, who press against barriers erected on side streets for a glimpse. A great tent has been set up in the plaza under which fallen stones from the vault are being sorted.

“The cathedral was born of the faith of our ancestors,” Monsignor Aupetit told the worshipers. “It was born of Christian hope.”

Still, the outpouring of dismay over the April 15 fire was ecumenical and global, far transcending the boundaries of the Catholic faith.

Immediately after the disaster President Emmanuel Macron pledged to rebuild Notre-Dame in five years. That deadline has been criticized, as have government plans to set up an independent agency to oversee the reconstruction, and suggestions that the restored spire should be built in a modern style, and not that adopted by the 19th-century architect who restored the cathedral, Eugène-Emmanuel Viollet-le-Duc.