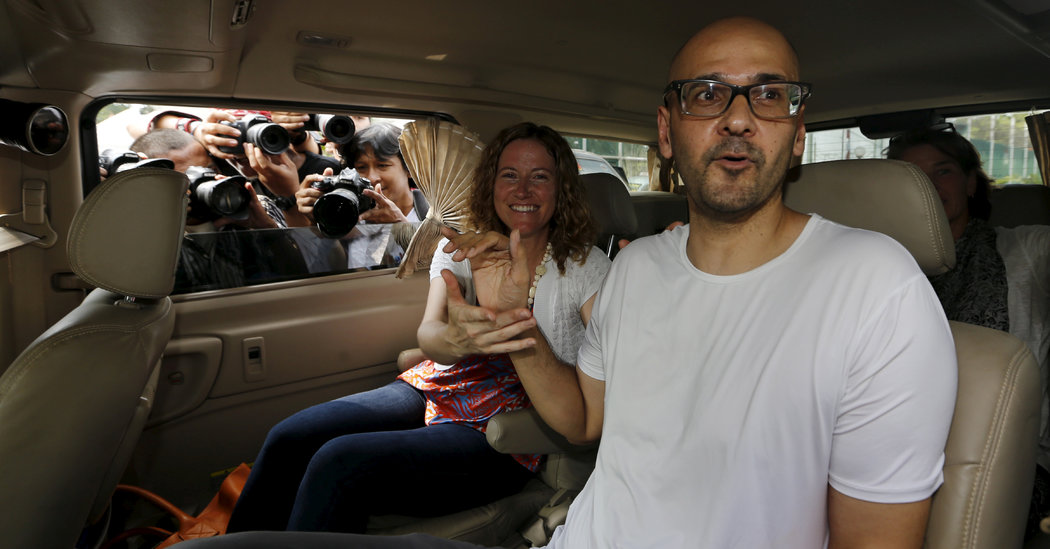 BANGKOK — A Canadian educator who has said he was wrongfully sentenced to 11 years in prison on charges of sexually abusing children at a Jakarta school has been granted clemency and returned to Canada, his family said on Friday.

Neil Bantleman, an administrator at the prestigious Jakarta Intercultural School, was convicted in 2015 along with six Indonesians on the basis of what critics contended was a flawed police investigation and preposterous evidence.

Among the evidence submitted at trial were claims that Mr. Bantleman had used magical powers to seduce the children and render the scenes of his crimes invisible.

“Five years ago I was wrongfully accused and convicted of crimes I did not commit and furthermore never occurred,” Mr. Bantleman said in a statement.

“I applied for clemency, which I am pleased was granted by Indonesia last month upholding essential justice and human rights,” said Mr. Bantleman, who spent most of the past five years behind bars.

The high-profile trial called into question the competence of the police, the fairness of Indonesia’s judicial system, and the desirability of Indonesia as a place for foreigners to live and work.

The six Indonesians convicted in the case — a teacher’s aide, Ferdinand Tjiong, and five school janitors — who also maintained their innocence, have not been granted clemency, though one was released on parole earlier this year after serving half of his sentence, local news media reported.

The allegations were initially brought by the mother of a 6-year-old boy who said he had been sexually abused at school.

The boy also told the police that the school’s employees had sexually assaulted him and other victims in “secret rooms” on campus that were later “hidden.” A police search of the school never found any sign of a secret room.

Eventually, the families of nine boys alleged that they had been abused, and that attacks had taken place during the middle of the school day in visible locations, including a glass-walled office, restrooms and an open kitchen area, as well as the secret rooms.

The police never interviewed employees who worked in the school office, a busy place full of staff members and students during the school day.

The defense contended that the questioning of the boys by parents, the police and counselors had led them to develop stories that were fantastic and implausible.

Expert studies have found that children can come up with elaborate stories that they firmly believe are true based on repeated suggestive questioning, a phenomenon that has occurred in other high-profile cases, such as the McMartin preschool case in California in the 1980s.

But the court, which held the trial behind closed doors, rejected defense testimony from foreign experts on the suggestibility of children in abuse cases.

Mr. Bantleman, Mr. Tjiong and the five janitors were convicted in separate trials and sentenced to prison terms ranging from seven to 11 years.

A sixth janitor died in police custody during a break in his interrogation. Photographs of his body showed signs of physical abuse, but no autopsy was conducted.

Four janitors confessed to the crimes but later retracted their confessions, saying that they had been extracted under torture. Another janitor, the only woman charged in the case, has always maintained her innocence.

The sexual abuse was said to have occurred in 2013 or the first half of 2014, but the police never established specific dates on which any of the incidents were alleged to have occurred, making it impossible for the defendants to present alibis.

The children also said they were videotaped during the attacks, but no recordings were ever found.

The defense argued that there was no medical evidence indicating that any of the children had been abused. But the court refused to accept a report by a Singaporean doctor who examined the boy whose statements prompted the investigation and found no signs of abuse.

The police said they found no connection between the two staff members and the five janitors, except that the boy alleged he was victimized by all of them.

The boy’s mother sued the school for $125 million, but the suit was later dismissed. Earlier this year, she filed a similar $120 million suit against the seven convicted in the case.

The Jakarta High Court overturned the convictions of Mr. Bantleman and Mr. Tjiong in 2015 and ordered them released. But six months later, the Supreme Court reinstated their convictions and added another year to their sentences.

The school community rallied behind Mr. Bantleman and Mr. Tjiong, and the United States ambassador at the time, Robert O. Blake, was an outspoken advocate on their behalf.

The school, which the United States helped establish, attracts students from more than 60 countries, including the children of wealthy Indonesians, foreign business executives and diplomats.

In his statement, Mr. Bantleman gave thanks to the Canadian government for helping to secure his release, and to his wife, Tracy, who defended him relentlessly throughout his ordeal.

“Thank you to our family and friends around the world and to all our colleagues in the international school community who have held us up and kept us strong and true to our values throughout this entire ordeal,” he said. “Tracy and I are very happy to be home and reunited with our family.”