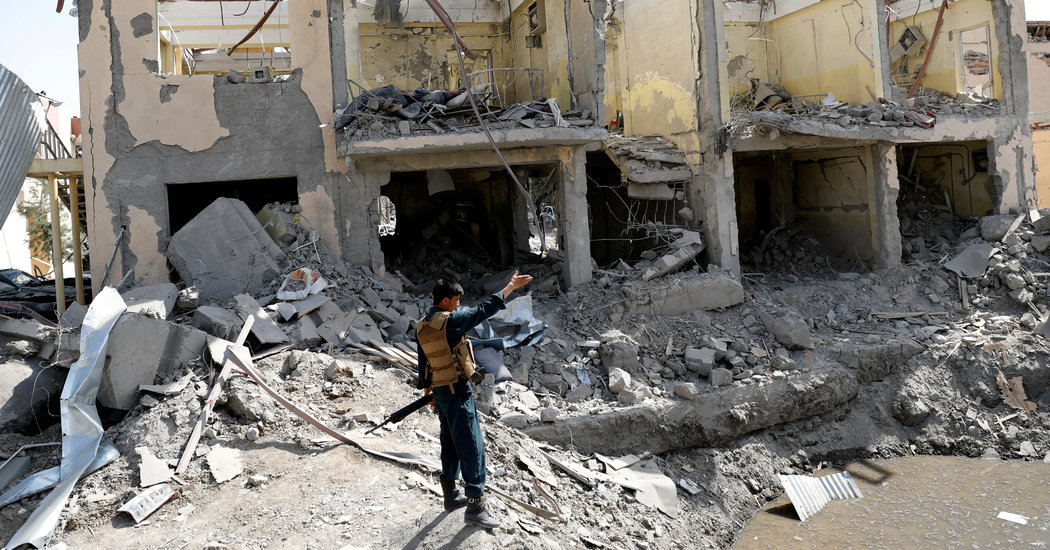 The following report compiles all significant security incidents confirmed by New York Times reporters throughout Afghanistan from the past seven days. It is necessarily incomplete as many local officials refuse to confirm casualty information. The report includes government claims of insurgent casualty figures, but in most cases these cannot be independently verified by The Times. Similarly, the reports do not include Taliban claims for their attacks on the government unless they can be verified. Both sides routinely inflate casualty totals for their opponents.

At least 96 pro-government forces and 35 civilians were killed over the last week of fighting in Afghanistan. The deadliest attack took place on Wednesday in Kabul, the Afghan capital, where a car bomb targeted two government buildings, killing 14 people. Elsewhere, in Jowzjan Province, 11 security forces were killed when the Taliban attacked and captured a military base in the Khanaqa District. Ten pro-government militia members and one police officer were killed, and insurgents escaped the area after seizing all the weapons and equipment inside of the base.

The Taliban attacked a security outpost in Khanabad District, killing two police officers and seizing all weapons and equipment inside. During the attack, the rest of the officers on duty were retrieving food.

The Taliban shot and killed an Afghan soldier in civilian clothes in the Charmgari area of Kunduz City, the provincial capital. The attackers were able to escape the area.

The Taliban attacked a security outpost in the Sia Aab village of Sholgara District, where fighting continued for 14 hours. One police officer and two soldiers were killed. Local authorities claimed that eight Taliban members were also killed in the clash, and the insurgents were eventually pushed back.

Four civilians were killed and six others were wounded in a clash between two militia commanders in the Takhanabad area of Cha Aab District. Both sides used heavy weapons.

The Taliban killed a taxi driver in the Khwaja Pesta area of Khanabad District. The driver’s brother is an Afghan special forces commander.

The Taliban stopped a civilian vehicle carrying members of the Afghan National Army in the Karkin area of Merzaka District, taking seven soldiers prisoner and later killing them. They had been on their way to Gardez City to receive their monthly salaries.

Ten civilians and four police officers were killed, and 145 people, including 92 civilians were wounded, in a car bombing in Kabul.

One civilian was killed and another was wounded when an I.E.D. attached to a civilian vehicle exploded in Kabul.

One civilian was killed by the Taliban in the Pal Pada village of Pashton Zarghun District. The motive for the killing was not clear.

One commando was killed while two soldiers and three pro-government militia members were wounded during a military operation in the Allahyar Village of Firouz Koh City, the provincial capital. Local authorities claimed that nine members of the Taliban were killed by Afghan forces.

Special forces of the National Directorate of Security, Afghanistan’s intelligence agency, carried out three operations on bomb-making factories of the Islamic State in three different areas of Kabul. Insurgents were planning to make suicide vests and car bombs to carry out attacks on various targets in Kabul. Police and army special forces also provided support for the operation, during which two Islamic Suicide attackers were killed and heavy weapons, bombs, ammunition, suicide vests and equipment were captured. Three N.D.S. and police special forces were killed.

While children were playing in a house in the Moqani Village of Pashton Kot District, a mortar shell exploded, killing one child and wounding four other civilians, including a woman.

After the Taliban attacked Charchino’s district center, police forces in the district abandoned their headquarters and sought shelter in a nearby military base. Eight police officers were killed in the clash, which continued for 48 hours.

An Afghan soldier was killed in an explosion in the Southern part of Khost City, the provincial capital, when a bomb attached to his car went off in the Spen Jumat area. Two civilians were also wounded.

An I.E.D. attached to a bicycle went off when a police convoy was passing from the area in Kabul’s 11th Police District, killing five officers and wounding seven others.

The Taliban shot and killed a woman in Laman village of Qala-e-Naw, the provincial capital. The woman was engaged to an Afghan soldier.

Five civilians were killed and 29 others were wounded when a motorcycle laden with explosives exploded in the Haji Abbas area of Herat City, the provincial capital.

Afghan soldiers ignored a security checkpoint and opened fire on a private vehicle in Qaisar District, killing one civilian and wounding four others, including men and women.

The Taliban killed a pro-government militia member in the Qezil Qul area of Pashton Kot district and seized his weapon.

A roadside bomb hit a police vehicle while it was patrolling in the Shar-E-Naw area of Pul-i-Kumri City, the provincial capital, killing one officer and wounding three others.

The Taliban attacked and captured a military base in Khanaqa District, where fighting continued for two hours. One police offer and ten pro-government militia members were killed, while two others were wounded in the clash. Insurgents escaped after seizing all weapons and equipment in the base.

A 46-year-old police officer, Najiba, was on her way to Mazar-e-Sharif from the district of Dawlat Abad when she was shot and killed by the Taliban. The officer was wearing civilian clothes and using a private vehicle. She was married and had two children.

In Shajoy District, the Taliban fired a rocket into a bazaar, killing three children and a woman. A man was also injured in the attack.

Two brothers were killed and another was wounded in a drone strike in the Shorcha Village of Pashton Kot District after climbing a hill in the area to get a proper phone signal.

The Taliban attacked a security outpost in the Shwat area of Ahmad Khail District, killing two local police officers and wounding another.

The Taliban attacked the center of Belcheragh District, where fighting continued for 12 hours. Four police officers and two commandos were killed, while five security forces were wounded. Insurgents eventually captured one of the outposts, and local authorities claimed that 20 Taliban fighters were killed.

The Taliban killed a civilian in the village of Ghaib in Shuhada District, having accused him of spying for the government.

An I.E.D. attached to a bus transferring Khorshid TV employees exploded in the Taimani area of Kabul, killing two passers-by and wounding another, along with three employees of the station.

Seven police officers were killed in an insider attack in the Torkotal area of Shawalikot District when their two colleagues open fire on them in a security outpost. The attackers managed to escape and a delegation was appointed to investigate the incident.

The Taliban attacked a security outpost in Cha Aab District, where fighting continued for several hours. Three soldiers were killed and seven others were wounded in the clash.

The Taliban attacked a security outpost in the Shinwriha Village of Kunduz City, the provincial capital, killing four local police officers and wounding two others. Two officers were also taken prisoner by the Taliban, which seized all weapons and equipment in the post.

The Taliban attacked a military base in the Sawrian village of Charbolak District, where fighting continued for five hours. One soldier was killed and one woman was wounded in crossfire.

Seven soldiers were killed, eight soldiers were wounded, and four soldiers were taken prisoner by the Taliban when a group of insurgents attacked a security outpost in the Band Bayan village of the provincial capital. The Taliban burned down the outpost and seized all the equipment and weapons.

A roadside bomb hit the vehicle of Shokrullah Shaker, the district governor of Zendah Jan, killing him and three police officers. Five other officers were wounded in the incident.

Taliban fighters on a motorcycle killed a police officer in Kandahar City’s Sixth Police District. The attackers escaped from the area.

The Taliban ambushed a police vehicle on the Faizabad area of the highway connecting Sar-i-Pul to Jowzjan Province, killing one police officer.

The Taliban attacked and captured a security outpost in a bazaar in Mangajik District, killing four police officers and one soldier during five hours of battle. Two soldiers were also wounded, and the outpost was later recaptured by security forces.

The Taliban attacked security outposts in Bozbay village of Qadis District, killing seven members of the pro-government militia and wounding another. Reinforcements tried to reach the area to provide backup, but they were ambushed by insurgents. Local authorities claimed that nine members of the Taliban were killed and 15 others were wounded.