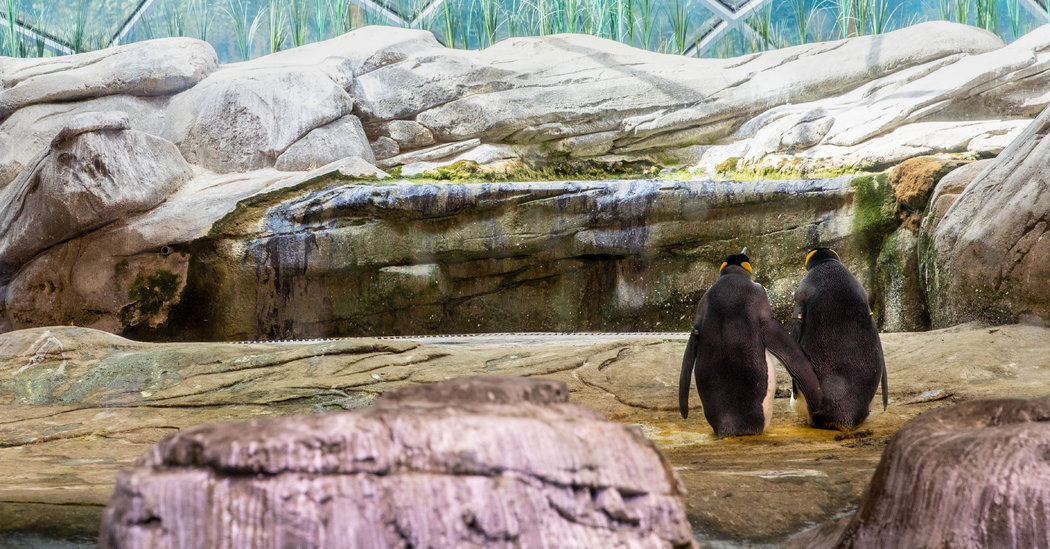 BERLIN — Skip and Ping moved to the German capital in April and soon decided to start a family. They scrounged around for objects like a wet rock and a slimy fish they could nurture in the hopes that it would one day hatch into a chick, according to zookeepers.

But needless to say, neither the rock nor the fish ever hatched for Skip and Ping, who are both male king penguins at Zoo Berlin, said Maximilian Jäger, a spokesman. The zoo knew they were a couple when they arrived from Hamburg this year, and it became clear within weeks that they wanted to start a family, he said.

“It is very common that two penguins of the same sex come together. I don’t think it is the majority of penguins, but it is not rare either,” Mr. Jäger said on Tuesday. “We are sure they would be good parents because they were so nice to their stone.”

So the zookeepers decided to give Skip — short for Skipper — and Ping a shot at fatherhood after a 22-year-old female, called The Orange because of the color of her wings, laid an egg in July. She had never hatched a chick of her own.

“We just had to put the egg in front of one of them, and he knew just what to do,” Mr. Jäger said. “He took his beak and put the egg on his feet and then put his stomach over it, which is the normal thing penguins do.”

The prospect of two gay penguins adopting an egg and raising a chick has become a feel good story in Germany in recent days. On Tuesday, penguin fans, journalists and a television crew from the country’s public international broadcaster gathered to watch Ping sit on the egg.

“They were really the thing that pushed me to come to the zoo, because I really do not come to the zoo very often,” said Anna Schmidt, a 33-year-old gender studies researcher from Berlin who described them as “the happy couple.”

Penguins are not the most expressive birds, but Ping and Skip seemed unfazed by all the attention. They sat on a rock and looked serenely out a window, their backs to the audience, while nearby The Orange groomed her wet feathers.

There may be one catch, though. Anja Seiferth, the penguin keeper at Zoo Berlin, said it was not clear if the egg had been fertilized. That means it might never hatch.

She said there was no way to know for sure until early September, when the zoo will either welcome a penguin chick or not. If it does, it will be the zoo’s first penguin chick since 2002.

“I hope Ping and Skip get a little penguin baby and become the best parents you’ve ever seen,” Ms. Seiferth said. “I hope that is what happens, but so far we do not know if it will.”

Like many expectant parents, Ms. Seiferth said, the pair seemed different now that they were tending an egg. Skip is normally the “tough” one, she said, while Ping is “more smooth.”

Homosexuality has been observed in a number of animal species. But gay penguins seem to be unusually prominent in the world of animal homosexuality.

There have been same-sex penguin couples at many zoos, including the Central Park Zoo in New York, Sea Life Sydney Aquarium in Australia and regional zoos or aquariums in Denmark and Ireland.

And then there is the London Zoo, which in June celebrated Pride month — and its six gay Humboldt penguins — with a banner in the penguin exhibit that said “Some penguins are gay, get over it.”

If there are any other gay animals at the Berlin zoo, the zookeepers said they had not made themselves publicly known.

“We don’t know if there are any other gay animals in this zoo,” Mr. Jäger said. “There may be.”

Watching Skip and Ping on Tuesday, Ms. Schmidt said their story made her think of the lingering obstacles some same-sex parents face in Germany. Surrogacy is banned here, and lesbians must navigate a complex process to be recognized as the second parent when their partners give birth.

“The state does not want the family, the nucleus of nationhood, to be autonomous or to create a new kind of family,” Ms. Schmidt, the gender studies researcher, said. She turned again to Skip and Ping, who still sat with their backs to the crowd.

“But we can see that nature does not care,” she laughed. “For them, there are no boundaries.”