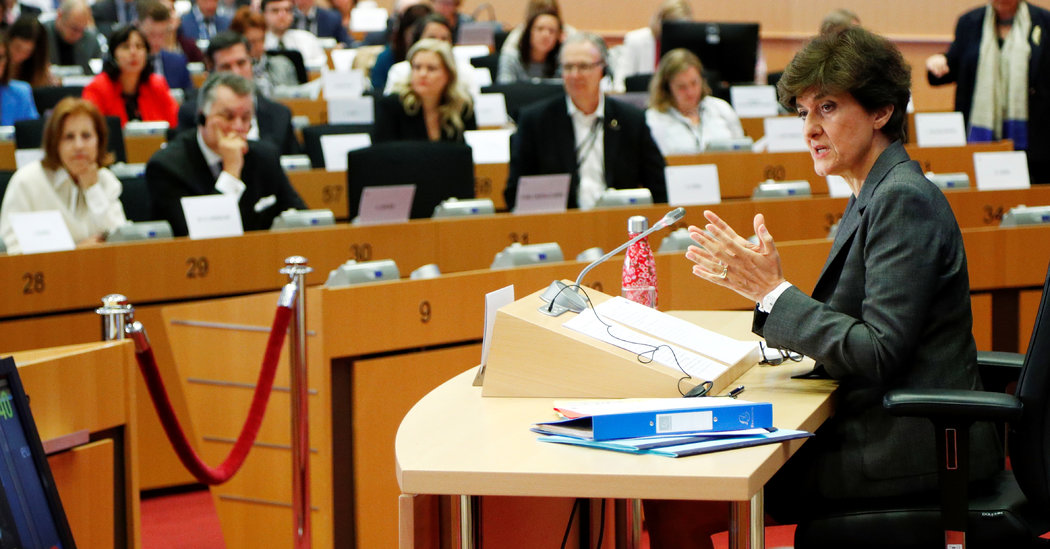 BRUSSELS — The French nominee for a top European Union job was rejected by the European Parliament on Thursday, a stinging defeat for President Emmanuel Macron, who has been criticized for bypassing the continental legislature, even as his power has been growing within the bloc.

Sylvie Goulard, a former minister under Mr. Macron and a longtime member of the European Parliament, was rejected after grueling hearings at the hands of her former colleagues.

She had been put forward by Mr. Macron to lead internal market and industrial policy at the European Commission, the European Union’s executive arm.

Her finances came under close scrutiny in the hearings process that is carried out by the European Parliament. Two years ago, Ms. Goulard resigned as French defense minister after she was accused of providing a no-show job to an assistant at her office.

Investigations into the claims in France and in Brussels are continuing. Ms. Goulard has personally repaid the cost of the position — 45,000 euros, or about $50,000 — and said she would resign as commissioner if convicted, but she has denied wrongdoing.

During her nomination hearings, other lawmakers also questioned the lucrative consulting work that she did for the Los Angeles-based Berggruen Institute, a research organization founded by the billionaire German-American investor Nicolas Berggruen, while she served in the European Parliament from 2013 to 2016.

The rejection of her nomination highlighted the intense politicking at the heart of the European Union.

Mr. Macron has been in the cross hairs of European lawmakers because he is seen as the main culprit behind circumventing them in the nomination process for the European Commission president, arguably the most powerful job in Brussels.

The European Union has long been criticized for not being democratic enough, and lawmakers had hoped to combat that reputation and become more central to the selection by using a process that allowed each political grouping in the legislature to put forward a presidential candidate.

Those candidates campaigned as heads of ballots for the European Parliament elections this year, creating a loose sense of democratic backing. Lawmakers had therefore understood that the presidency would go to one of them.

But Mr. Macron and his allies overrode that process — known by its German moniker spitzenkandidat, or “leading candidate” — and instead resorted to the old-style European horse-trading method to select a new European Commission president in July.

Ms. Goulard’s political allies in Renew Europe, a grouping of European liberals in which Mr. Macron is perhaps the most prominent figure, said that her rejection was down to political revenge.

The Parliament in previous days rejected two other commissioner candidates, one from the big conservative bloc, the European People’s Party, and the other from the main center-left group, the Progressive Alliance of Socialists and Democrats. That led some to see the rejection of Ms. Goulard as retaliation against Renew Europe, the third-biggest faction in the Parliament.

Simone Tagliapietra, an expert with the Brussels-based think tank Bruegel, said, “What we are seeing at the European Parliament truly is a political nuclear chain reaction.”

“On her side, Sylvie Goulard did not perform well in the hearings, adopting a defensive and legalistic approach,” he added. “This clearly did not work.”

Others pointed to a broader desire by Parliament to exert its influence and to punish Mr. Macron.

Camino Mortera-Martinez, a researcher at the London-based Center for European Reform, said, “The Parliament never misses an opportunity to flex its muscle, but it was a misstep by Macron to put forward a candidate that he didn’t think was O.K. to be in his own government.”

But then, he said, Ms. von der Leyen failed to muster the support she had promised for Ms. Goulard in Parliament.

He declined to comment on any possible replacement candidate.

“We are currently in a democratic and transparent parliamentary process,” she said in a statement. “We must not lose sight of what is at stake: The next five years will be decisive for Europe in a difficult global environment.”