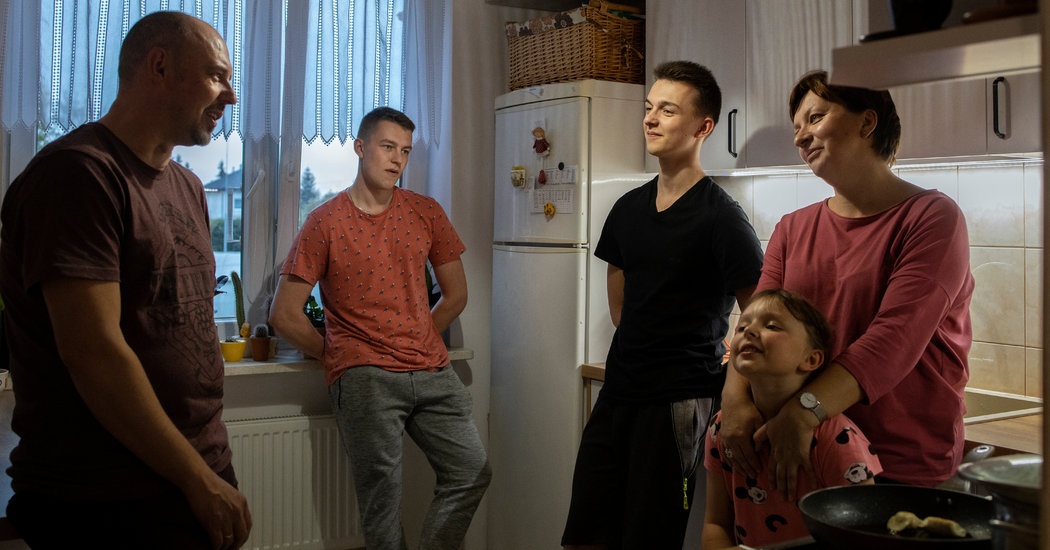 ZAMOSC, Poland — Four years ago, Agnieszka and Adam Kowalczyk were struggling. They both had full-time jobs — she as a teacher and he as an electrician — yet month after month they found themselves falling deeper into debt.

So when Jaroslaw Kaczynski and his Law and Justice Party promised voters that they would introduce a generous infusion of cash for families with children, the Kowalczyks figured they would give them a chance — even if they were deeply skeptical.

“I didn’t really believe they would deliver on their promises,” he said.

“They were the lesser of two evils,” his wife added.

Law and Justice not only kept its promise, it also set out on the most radical overhaul of the economy in a generation — one that has built a floor under low- and middle-income families and proved wildly popular with voters like the Kowalczyks.

As Poles vote again this Sunday, that social welfare model lies at the heart of the success of Law and Justice. The party’s unusual blend of nationalist appeals and progressive policy has given it a unique place in Europe, and helps explain why most polls show that it is likely to hang onto power.

Outside Poland, Law and Justice has earned harsh criticism for asserting control over the judiciary in ways some fellow European Union members say is anti-democratic, and for its antipathy toward immigration and environmental policies to combat climate change.

But within Poland, the party has succeeded not merely by playing to the conservatism of its rural and small-town base, but also by attempting to redistribute wealth, so far without the budget-busting giveaways that often accompany populism.

“These guys are trailblazers in showing that you can marry a kind of right-wing populism with left-wing economic politics,” said Mitchell A. Orenstein, chairman of Russian and East European Studies at the University of Pennsylvania.

Mr. Orenstein, who has criticized the authoritarian drift of the government, said it would be a mistake to dismiss what the party was doing economically.

“What’s impressive about this government is not only how they increased social spending in ways that are universal, but also hit their constituency,” he said. “And they have done it while keeping their deficit low, and they are actually trying to balance the budget.”

The government has not only expanded the child credit program — which now provides a monthly stipend of around $125 for every child in a family — it has increased pension payments and eliminated taxes for people under 26.

In the weeks before Sunday’s election, the government said it would nearly double the minimum wage, to around $1,000 per month. It also announced a raft of new spending proposals.

Economists estimate that those economic plans could cost nearly $10 billion annually, leaving some business leaders worried about how the government will pay for it.

Critics of the government say it has benefited from a strong economy and the solid foundation built by previous administrations.

Leszek Balcerowicz, an economist who played a key role in Poland’s transition from communism to capitalism and now runs FOR, a foundation focused on civic development, said the spending was coming at the cost of funding other essential services like health care and education.

But the propaganda machine of the government has been relentless, he said.

“Every day, they push this message of how successful the government has been, how well the economy is doing,” he said. “I remember the Communist propaganda, and this is worse.”

The Lewiatan business lobby group and 54 of its peers wrote an open letter to Prime Minister Mateusz Morawiecki warning of the dangers of putting more tax burdens on businesses. Others have expressed concern that the generous spending has left the economy vulnerable in the event that the astounding growth of recent years slows down.

The prime minister, in an interview this summer at his offices in Warsaw, defended the spending and said it was part of a project to reshape Polish society.

“The changes we started four years ago were fundamental and quite revolutionary,” Mr. Morawiecki said. “It was a revolution in the economy, in terms of social policy, redistribution, if you want, of goods and services and money, and the promise to do more. To repair all the flaws from the post-Communist era.”

It is the animating idea of the Law and Justice party: that the peaceful transition to democracy was fundamentally flawed and benefited an elite class that included former Communists.

While most international legal scholars find the party’s argument on the courts to be self-serving and argue that the changes are mainly about political control, the economic policies are harder for critics to dismiss.

It is an agenda made all the more compelling by the way Mr. Kaczynski, the Law and Justice leader, imbues his financial plans with religious symbolism and nationalist fervor.

“A person whose pockets are empty is not really free,” he tells supporters.

When he announced plans to raise the minimum wage, he declared an end to the “post-colonial concept of Poland as a source of cheap labor.”

In an interview on the influential Catholic Radio Maryja last week, Mr. Kaczynski defended himself from charges that his policies seemed to harken back to the state-dominated era before 1989.

“I’ve been even called upon to confess, so to speak, that I am a Socialist,” he said. “Well, I’m not a Socialist, I’m a supporter of social solidarity.”

“We want to support the development of small, medium and smallest entrepreneurship,” he said. “The economy should benefit the whole society, instead of just one group and leaving the rest of the society in God’s good grace.”

He has cited a book by the French economist Thomas Piketty, “Capital in the Twenty-First Century,” as an important window into his thinking.

But Mr. Piketty, in response to an email query, said that Mr. Kaczynski and his party, known as PiS for its initials in Polish, were not true champions of greater economic equality.

“The ruling party has been able to attract lower and middle class voters that were disillusioned by previous governments and the high level of inequality in the country,” he wrote. “But in the end PiS is mostly driven by its nationalist ideology, and does not really care about the reduction of social inequalities.’’

For many voters, however, the government’s economic policies have changed their daily reality, especially in the country’s underdeveloped east.

The boom that transformed Poland over the past three decades into the economic engine of Central Europe had seemed to pass by places like Zamosc, one of the few Polish cities where a PiS backed candidate was elected mayor.

“People here felt neglected, and Law and Justice campaigned on a promise to redistribute wealth to eastern Poland,” said Mayor Andrzej Wnuk. “The government has delivered on that promise.”

The small Renaissance city of around 65,000 suffered the same fate as many other towns and villages in the east as the country transitioned from Communism to capitalism. As investments poured into western cities like Warsaw, Poznan and Gdansk, factories here were shuttered overnight, people left in droves to seek opportunity elsewhere and jobs were scarce.

At the same time, the social safety net provided by the state for decades after World War II was dismantled.

Both Adam and Agnieszka Kowalczyk’s fathers had worked for years at a meat processing plant famous for making hams shipped in heart-shaped metal containers.

“It was closed overnight, and both our fathers lost their jobs,” Mr. Kowalczyk said. So did 2,000 other employees.

Later, even as the economy grew, the Kowalczyks did not feel it. Their wages were low and stagnant. “We mostly bought poor quality food and cheap clothes,” Mr. Kowalczyk said. “We could not invest in our children.”

He said: “My wife had a teacher’s salary, I made a minimum wage and we had four children and a mortgage to pay. We couldn’t live without getting into a small debt every month.”

Today the Kowalczyks still live modestly in Zamosc, with the four children sleeping in two bedrooms and the parents converting the living room to their bedroom at night. On the walls of their apartment there are photos of the children, paintings of the Virgin Mary and framed jigsaw puzzles completed by Mr. Kowalczyk.

But the support that has come with Law and Justice in power has made a measurable difference in their lives.

“Once we started getting that extra cash, we didn’t have to overdraft our bank account every month,” Ms. Kowalczyk said.

“We still couldn’t go on a crazy shopping spree,” she said, “but we could buy better food, nicer clothes and we could send our children to math lessons, guitar lessons, English and dance lessons. We started really investing in their education.”

The policies have also helped her mother, who benefited from the extra pension payments.

“She was in a pretty bad situation,” Ms. Kowalczyk said. “My father died in 1997 and left my mom on her own in a big apartment that she had to pay for herself. She was never one to complain, but it must have been hard for her to support herself on such a small pension. And we couldn’t really help.”

Now, she collects an extra pension check every year. The money has allowed her to do some much-needed repair work on the apartment, purchase a new lamp and occasionally buy her grandchildren a gift.

The couple’s son, Mateusz, 19, has benefited from the government’s policy of eliminating taxes on young people. He took a job at a local gas station to help pay for school and saw an immediate impact.

Adam Kowalczyk said, “We wouldn’t describe ourselves as politically active.”

But any doubt he and his wife may have once had about Law and Justice has been resolved. They know who they will cast their ballot for on Sunday.