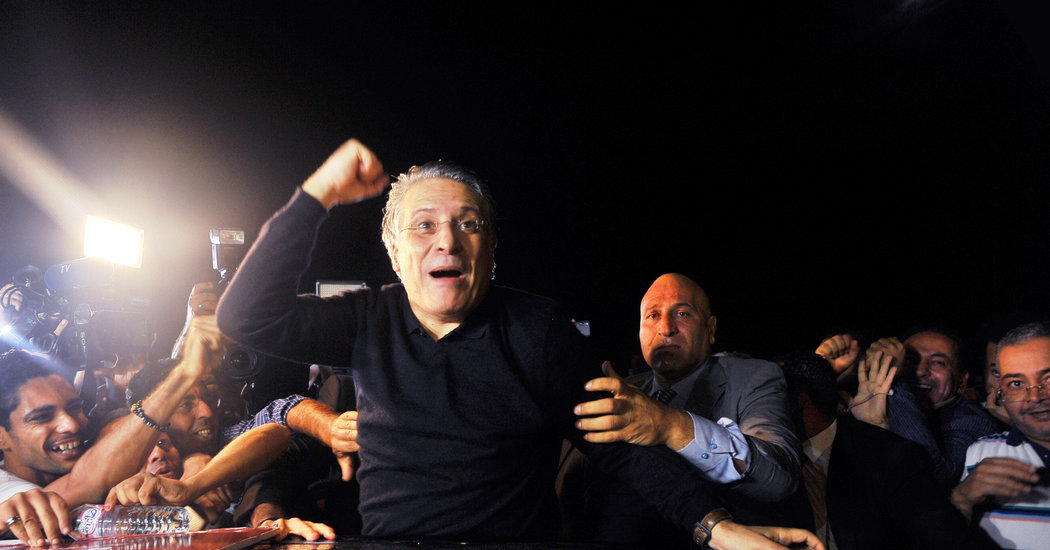 TUNIS — One of the two candidates in the runoff to become Tunisia’s president was released from prison on Wednesday, just four days before the vote.

As he stepped from the prison on Wednesday night, the candidate, Nabil Karoui, was greeted by the cheers of his supporters, who had gathered outside, with some waving flags with his face on them.

Mr. Karoui, leader of the secular Qalb Tounes, or Heart of Tunisia party, had been arrested on Aug. 23, as part of an investigation into money laundering and tax fraud. Mr. Karoui has said the allegations amounted to a politically motivated smear campaign.

A day before his release, Mr. Karoui, 56, had sent a letter to the High Independent Authority for Elections asking to be able to visit the 24 districts of Tunisia in order to campaign and give interviews to the media. If his request was not granted, Mr. Karuoui, a businessman and co-owner of a popular TV network, said in the letter, he would seek the postponement of the election.

Postponing the election would almost certainly have created a constitutional crisis. The former president, Béji Caïd Essebsi, Tunisia’s first popularly elected head of state, died on July 25, and according to the Tunisian Constitution, a new president must be chosen within 90 days, or by Oct. 24.

The head of Tunisia’s independent electoral commission praised the release.

“Our point of view was very clear since the beginning,” said Nabil Bafoun, the commission’s leader. “There was no equality of opportunity as one of the candidates was not present and arrested.”

While his release means Sunday’s election is likely to go forward, questions about how his arrest and detention might damage the electoral process remained.

“We did not expect this decision to be positive,” said Nizah Souei, one of Mr. Karoui’s lawyers. “It is important for the Tunisian voters that Nabil Karoui is free, but we still don’t know how the remaining days of the campaign will go.”

Only two days of campaigning are left; regulations prevent media coverage on Saturday, the day before the election. If Mr. Karoui loses the vote, his supporters may argue that he did not enjoy the same chances as his opponent, Kais Saied, a retired law professor not affiliated with a party.

In a bid to forestall such complaints, Mr. Saied, 61, has not campaigned while his opponent in the runoff was jailed.

In the first round of presidential voting last month, Mr. Saied came in first, winning 18.4 percent of the vote as an anticorruption independent, while Mr. Karoui finished second with 15.6 percent.

Mr. Saied has been expected to win because of endorsements from several major political parties whose candidates failed to make the final round. But Mr. Karoui’s release “could still give him a boost in the polls,” said Sharan Grewal, a professor of government at the College of William & Mary and a researcher on Tunisian politics.

The release of Mr. Karoui could also prompt other parties to endorse him, especially those that have not yet offered advice to their voters, Mr. Grewal added.

Despite his release, Mr. Karoui is still facing charges. No trial date has been set.

Also on Wednesday, the preliminary results of this past Sunday’s parliamentary elections were announced, putting Mr. Karoui’s party in second position with 38 seats in the 217-seat chamber behind the conservative party Ennahda, which won 52 seats.