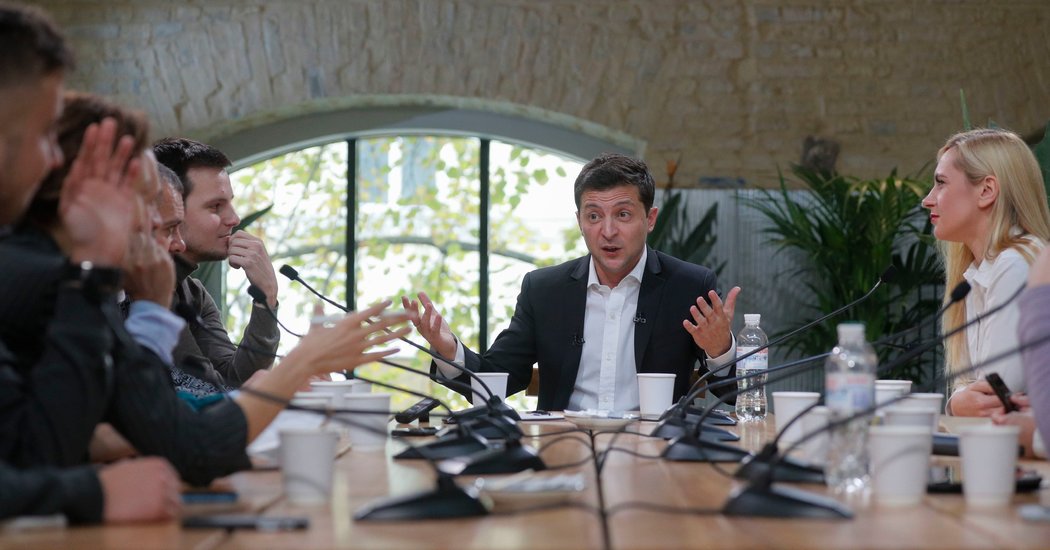 KIEV, Ukraine — Ukraine’s president, Volodymyr Zelensky, said on Thursday that President Donald Trump did not seek to blackmail him over military aid when the two leaders spoke this summer during a telephone call that has formed the basis of an impeachment inquiry in the United States.

Speaking at a marathon news conference at a food court in Kiev, Mr. Zelenksy said that he was not aware at the time of the call that Mr. Trump had put a hold on nearly $400 million in promised military aid and that the topic had not come up.

“There was no blackmail,” Mr. Zelensky said. “They blocked the military aid before we had our conversation, but we did not discuss it. Later we discussed it with the defense minister and he said, ‘we have a problem, they’ve blocked this money.’”

Mr. Zelensky also said he “didn’t care what happens” in the case of Burisma, the Ukrainian gas company that once employed a son of former vice president Joseph R. Biden Jr. In the phone call, President Trump had asked Mr. Zelensky to do him a “favor” and investigate the debunked theory that Mr. Biden had directed Ukraine to fire an anti-corruption prosecutor who had his sights on the company.

A top Ukrainian prosecutor said last week that his office would review the Burisma case along with more than a dozen other corruption investigations that were conducted or closed by the previous government of President Petro O. Poroshenko.

Mr. Trump’s decision to delay the release of the military aid is one of the central questions in the impeachment inquiry being pursued by Democrats in the House of Representatives. At issue is whether Mr. Trump sought to use the assistance as leverage to pressure Mr. Zelensky’s new government to open investigations into Mr. Biden, one of the president’s leading opponents in the 2020 election.

At the time, some officials, including the acting United States ambassador to Ukraine, raised alarm over the decision, suggesting the aid and a possible meeting between Mr. Trump and Mr. Zelensky at the White House were being used to strong arm the Ukrainian government.

“Are we now saying that security assistance and WH meeting are conditioned on investigations?,” the acting ambassador, William B. Taylor Jr., said in a text message to another ambassador that was published as part of the impeachment inquiry.

If that was the intended message, Mr. Zelensky does not seem to have received it. The Ukrainian president said that after he became aware of the issue, he raised it, first with Vice President Mike Pence at a meeting in Poland and then with Mr. Trump directly during a meeting at the United Nations in September.

“After our meeting the United States unblocked it and added an additional $140 million,” he said.