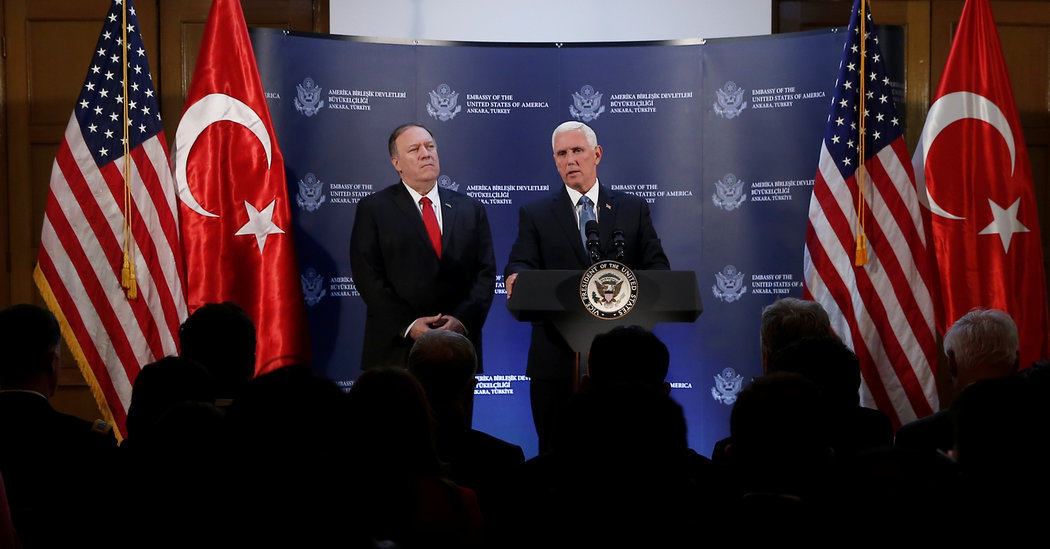 The best that can be said for the agreement is that it may stop the killing in the Kurdish enclave in northern Syria. But the cost for Kurds, longtime American allies in the fight against the Islamic State, is severe: Even Pentagon officials were mystified about where tens of thousands of displaced Kurds would go, as they moved south from the Turkey-Syria border as required by the deal — if they agree to go at all.

And the cost to American influence, while hard to quantify, could be frightfully high.

In the 11 days between Mr. Trump’s fateful phone call with Mr. Erdogan and the trip to Ankara by Mr. Pence and Secretary of State Mike Pompeo on Thursday, the United States has ceded ground in Syria — including American bases — to the Russian-backed Syrian dictator, Bashar al-Assad. And it has shaken the faith of American allies that, in a time of stress, Washington will have their back.

“This just looks like a complete cave-in by the United States to everything the Turks demanded,” said Eric S. Edelman, a former ambassador to Turkey and a senior Defense Department official in the George W. Bush administration. “I don’t see what the Turks gave up.”

In fact, if the sanctions imposed against Turkey by the Trump administration are lifted, as Mr. Pence said they now would be, the Turkish leader would pay a far lower price than Russia did for its annexation of Crimea in 2014. The sanctions imposed on Moscow then are still in place.

But there are other winners in addition to Mr. Erdogan, who has routed the Kurdish groups he views as terrorists who were living in an American protectorate.

Chief among them is President Vladimir V. Putin of Russia, who gains vast influence in a strategic corner of the Middle East where, until 2015, he had almost none. Now, he is a player, and already is filling the territorial and political vacuum that Mr. Trump left after he agreed to get out of the way of the Turkish invasion of Syria, which a small contingent of American Special Operations forces were there to prevent by their very presence.

Iran was also a winner. It has long used Syria as a route to send missiles to Hezbollah and flex its muscles across the region. That, in many ways, is the most perplexing part of the president’s decision to withdraw, because it runs so counter to his “maximum pressure” campaign against Iran’s clerical leaders and the Islamic Revolutionary Guards Corps.

And Mr. Assad, who was barely clinging to power after the Arab Spring in 2011, and whose military facilities Mr. Trump bombed in the opening months of his presidency in 2017, has a new lease on life. The Americans are gone from the one corner of his country they once occupied.

Mr. Trump has a different view — no surprise, given the bipartisan critique of his failure to stop Mr. Erdogan during their phone conversation, or threaten sanctions before the invasion, rather than after the facts had changed on the ground.

“I’m happy to report tremendous success with respect to Turkey,” Mr. Trump told reporters after his vice president and secretary of state announced the deal. “This is an amazing outcome. This is an outcome, regardless of how the press would like to damp it down, this was something they were trying to get for 10 years.”

Mr. Trump’s joy may reflect a very different worldview than that of his military, his diplomats or the Republican leaders who say he has damaged America’s reputation and influence. While his party, and Democrats, accused him of betraying allies and aiding Russia, Mr. Trump insisted he was simply making good on a campaign promise to bring troops home from “endless wars.”

On Wednesday, as Mr. Pence and Mr. Pompeo were flying to Ankara, Speaker Nancy Pelosi was challenging the president on whether there was any strategic logic to his withdrawal from Syria — especially if it resulted in freeing detained ISIS fighters who might now attack in the region or on the United States.

On Thursday, recounting her heated discussion with the president at the White House the previous day, she said she asked him how his strategy fit with his announcement last Friday that nearly 3,000 more troops were being deployed to Saudi Arabia. The president responded that the Saudis were paying the cost of that deployment — suggesting that Mr. Trump was happy to commit troops to the highest bidder among American allies, rather than make an independent judgment about their strategic importance.

“The announcement today is being portrayed as a victory. It is far from a victory,” Senator Mitt Romney, Republican of Utah, said on the Senate floor Thursday. “Given the initial details of the cease-fire agreement, the administration must also explain what America’s future role will be in the region, what happens now to the Kurds and why Turkey will face no apparent consequences.”

And Mr. Romney noted, “The cease-fire does not change the fact that America has abandoned an ally.”

At the Pentagon on Thursday afternoon, senior officials scrambled to understand how they were supposed to carry out the agreement Mr. Pence and Mr. Erdogan had negotiated.

Several civilian and military officials complained that the broadly worded deal left large policy and logistical gaps to fill, with many questions about how to carry out commitments by the two sides that appeared to contradict the fast-moving situation on the ground.

With the withdrawal of about 1,000 Americans already underway, the officials asked, how would those departing forces conduct counterterrorism operations with the Turkish military, as Mr. Pence insisted they would? Would the Syrian Kurds fully comply with a pullback agreement they had little say in drafting, and in which they were the clear losers?

Their questions did not stop there. How large and how deep is the buffer area inside Syria that was supposed to give Turkey a safe zone between its border and the Kurdish fighters? The original safe zone that the United States and Turkey envisioned was 75 miles long and roughly 20 miles deep. But it was upended by Mr. Trump’s acquiescence to the invasion, and now Turkish forces have pushed beyond that.

And what about Mr. Assad’s forces and their Russian allies — to whom the abandoned Syrian Kurds reached out to after the American abandoned them?

It also remains unknown whether Turkey will be required to withdraw all or some of its forces sent across a sovereign border into Syria. (One official said a reason Turkey agreed to the deal on Thursday is because the Kurds have put up more resistance, and Turkish forces could not advance south any farther as a result.)

Several Pentagon and State Department officials and military officers who have worked on Syria policy or deployed to the country’s northwest expressed shock, outrage and disbelief at the administration’s second major capitulation to Mr. Erdogan in less than two weeks.

These officials said Mr. Erdogan was the big winner, and appeared to have gotten everything he wanted.

Military officials said they were stunned that the agreement essentially allowed Turkey to annex a portion of Syria, displace tens of thousands of Kurdish residents and wipe away years of counterterrorism gains against the Islamic State.