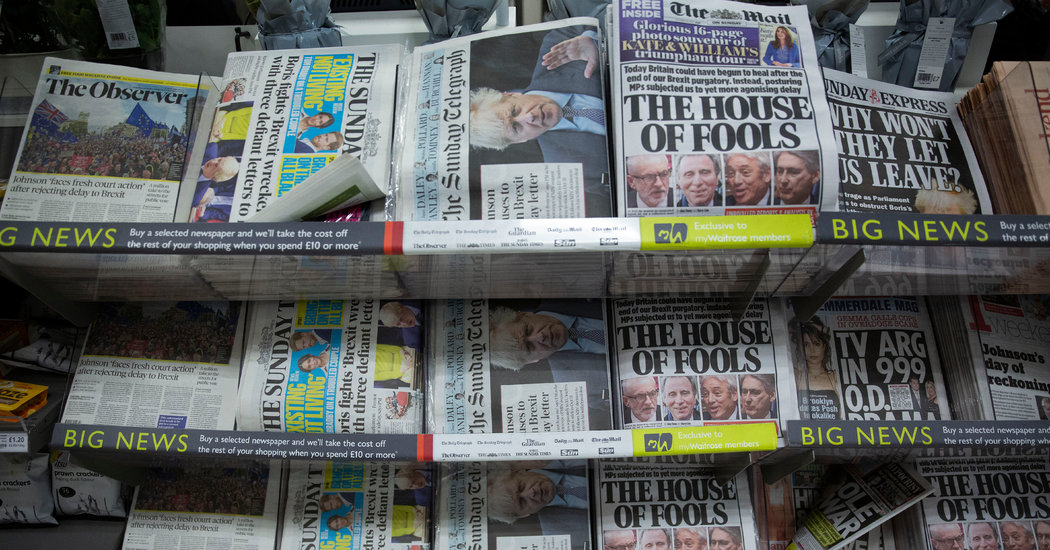 LONDON — By the time the Sunday newspapers went to press this past weekend, Prime Minister Boris Johnson of Britain had done something that he judged worse than laying “dead in a ditch”: asking the European Union to postpone Brexit, the project at the heart of his political being.

And yet Britons awoke on Sunday to front pages depicting a swaggering prime minister, tousle-haired and defiant, refusing to back down.

“Johnson refuses to sign Brexit delay letter,” The Sunday Telegraph blared, referring to a ploy that, along with the extra letters he sent, was promptly ignored by top European officials.

The Sunday Express, a tabloid, castigated Britain’s Parliament for having refused to give Mr. Johnson’s Brexit deal the approval he craved. “Why won’t they let us leave?”

The gloating news coverage turned what analysts called an undeniable setback into an act of great resolve, averting the sort of humiliating news moment that ultimately doomed Mr. Johnson’s predecessor, Theresa May.

Despite a losing streak in Parliament and serious concessions to European officials in Brexit talks, Mr. Johnson has managed to cast himself in much of the British print press as a conquering hero, the country’s best hope in a Britain-versus-Europe conflict that he helped foment as a Telegraph journalist decades ago.

“Boris Johnson is more of a journalist than he is a statesman by a considerable margin,” said David Yelland, a former editor of The Sun, a tabloid. “His instincts are those of a newspaper columnist, and his consistency is that of a British newspaper columnist, in the sense that he says one thing on a Monday and another on a Tuesday and it doesn’t matter.”

Mr. Johnson’s success in parts of the press has led to a reckoning over British news coverage of Brexit more broadly, with critics accusing major broadcasters of taking their cues too often from right-wing newspapers and of failing to inform Britain about the long and difficult trade negotiations that await even if a Brexit deal is approved.

Pollsters have described people reacting with horror when told in focus groups that a Brexit deal only covers the terms on which Britain leaves the European Union, not the highly contentious details of Britain’s long-term relationship with the bloc.

Britain’s media landscape is considerably more polarized than the United States’, and its newsstands are dominated by right-wing papers that have long rooted for Brexit, giving Mr. Johnson a ready-made audience in the press for his maneuvering.

But so far, Mr. Johnson has also shaped the media narrative much more successfully than Mrs. May, analysts said, giving his leadership a sense of momentum that constantly eluded her. When Mrs. May was forced to delay Brexit, right-wing newspapers often treated it as a shameful defeat, whereas Mr. Johnson has worked to turn that anger on Parliament, instead.

“She was using the same populist strategy,” said Ian Dunt, the author of “Brexit: What the Hell Happens Now.” “She was just a bit more inept at reading the way the narratives would go.”

Having worked as a journalist, first as a Brussels correspondent for The Daily Telegraph and recently as a columnist, Mr. Johnson is at home in the backslapping, male-centric media world in a way Mrs. May never was. Some journalists refer to him simply as “Boris,” a familiarity that evaded Mrs. May.

For Mr. Johnson, on the other hand, “All these guys who are writing these editorials and comments, they are his mates — and until very recently an employer. Until so recently in fact that the last check wouldn’t have cleared yet.”

Mr. Johnson is also enjoying a honeymoon period that analysts said even less charismatic prime ministers are afforded. Mrs. May received glowing coverage during the early months of her leadership, with The Daily Mail, a tabloid, once drawing her standing on a European Union flag, her hands on her hips and a handbag on her wrist, beside the headline: “STEEL OF THE NEW IRON LADY.”

But once Mrs. May squandered her hold on Parliament by calling a snap election and then doing poorly in it, the right-wing British press turned on her.

Some analysts also said that Mr. Johnson, both in the British press and among the public, is being forgiven for bungles because he is a man. His ability to negotiate a new Brexit deal with the European Union was met with widespread praise in the right-wing press — never mind that it is a version of a deal that Mrs. May refused because she said it hurt Northern Ireland.

“Boris Johnson is kind of ‘hail fellow well met,’ blustering Eton schoolboy, and Theresa May was an uptight, hard-working, completely uncharismatic head girl,” said Angela Phillips, a professor of journalism at Goldsmiths University of London, describing how the two leaders were portrayed in the right-wing press. “Quite a lot of it has been incredibly sexist.”

In much of Mr. Johnson’s favorable news coverage, analysts have seen the hand of Dominic Cummings, the prime minister’s chief aide, who has long sparred with the British press in his government posts.

After Parliament refused to endorse Mr. Johnson’s deal on exit terms with the European Union on Saturday, he asked the bloc to delay Brexit, as the law required him to. But refusing to delay Brexit has been the central promise of Mr. Johnson’s leadership. And so he also sent a few salvos that seemed aimed as much at the next day’s newspapers as at Brussels.

To emphasize that lawmakers were forcing his hand, Mr. Johnson’s office said the letter he had sent to the European Union was actually nothing more than a photocopy of a letter that Parliament had pre-written for him. (Journalists later disputed that, showing that the font, spacing and indentation had changed.)

Mr. Johnson also refused to put his signature on the letter asking for a delay, and attached two supplementary letters: one (signed) in which he said he wanted no part of a delay, and a third from a British official explaining how Parliament had boxed him in.

Sam Freedman, a nonprofit executive who once worked with Mr. Cummings at the Department for Education, said on Twitter that the episode reminded him of when Mr. Cummings used to tell journalists that education inspectors were conducting “dawn raids,” despite schools not usually being open at dawn.

“It’s completely meaningless but he knows journalists love that kind of little detail that adds color to what, for most people, is an exceptionally dull process story,” Mr. Freedman wrote.

Given falling circulation numbers and the mass digital migration of news, analysts have questioned whether British newspapers still hold huge sway. Left-wing newspapers, including The Guardian, have provided plenty of confrontational reporting on Mr. Johnson over Brexit.

But if nothing else, the right-wing press can still set the agenda for major television outlets like the British Broadcasting Corporation, Professor Phillips said.

And after Mr. Johnson’s weekend defeat, British newspapers on Monday morning were already casting roles for a looming fight in Parliament and, eventually, in an early general election, depicting Mr. Johnson as the victim of what The Daily Telegraph described as a “guerrilla war” by Labour Party opponents to stop his deal.