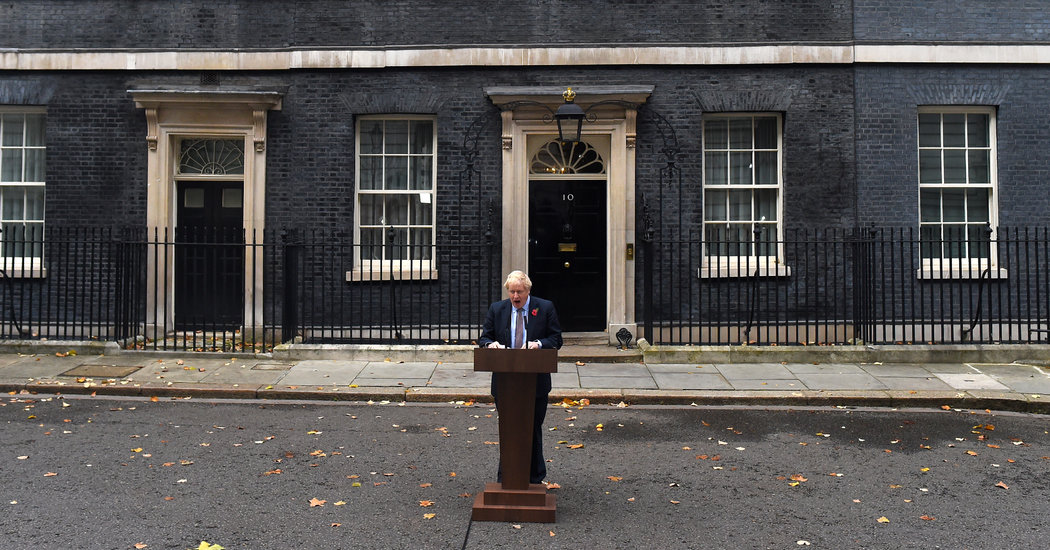 LONDON — Outside 10 Downing Street this week, Prime Minister Boris Johnson of Britain launched his election campaign with a broadside against his opponents — joking that delays to Brexit made him want to chew his necktie — but then abruptly changed tack.

With a wave of his arm, he promised the biggest program of health spending in a generation. Then came a pledge of billions of pounds for schools. That was followed by one to hire 20,000 police officers. As for rail and road, there would be nothing less than a “revolution” in infrastructure.

“It’s only if you have great public services that you can have a successful market economy,” said Mr. Johnson, banging his fists on a lectern to underscore the point.

After years of austerity from the ruling Conservatives many Britons would agree. Yet the promise to transform Britain’s creaking, overstretched, public services is one of the more remarkable election pitches of recent years.

In effect, Mr. Johnson is running against his own party’s record of nine years in power.

“He really is pulling off the brakes of austerity and seeking to inject money into the public services that we haven’t seen recently from the Conservatives,” said Sophia Gaston, a research fellow at the London School of Economics, who argued that the election campaign had added a new and surreal dimension to the country’s Brexit convulsions.

“You have this messaging from the Conservatives that Britain deserves better, and you think, ‘Well you have been in power for almost 10 years,’” Ms. Gaston said. “It is really extraordinary.”

Behind the shift is a simple strategy. Mr. Johnson and his Conservatives need to appeal to working-class voters, who have traditionally spurned the Tories. The route to victory, said Craig Oliver, who was director of communications to former Prime Minister David Cameron, is “to convince them that their concerns — like the health service — are your concerns too.”

Mr. Johnson has been prime minister only since July and was not in Parliament when austerity began in 2010 under a Conservative-led coalition. He is, however, a lifetime Tory, was twice elected mayor of London for the Conservatives and served for two years as foreign secretary in the cabinet of his predecessor, Theresa May.

But that was then.

On Thursday the chancellor of the Exchequer, Sajid Javid, tore up the government’s fiscal rule book and announced plans that would allow an extra 22 billion pounds a year in public investment, financed by borrowing.

In opening the spending taps, the Conservatives have learned the lesson of Mrs. May’s disastrous 2017 election campaign, a contest she precipitated in the hubristic expectation of a big win to help her push Brexit over the finish line.

But Mrs. May proved to be a wooden campaigner and lost her majority. Part of her failure was blamed on a manifesto that offered voters a combination of Brexit and more economic pain.

This time, Mr. Oliver said, “the Tories are doing much more on public spending to show that they understand their concerns.”

So much, in fact, that according to one report, both main parties “would push the U.K. state close to — or even above — 1970s levels of spending.” a reference to a decade associated with heavy public spending and an economic malaise from which the country was jolted by the bracing market economics of the Conservative Margaret Thatcher.

“The election therefore has the potential to reverse the Thatcher revolution on the public finances,” said the report from the Resolution Foundation, adding that the Tory plans would lift government spending to 41.3 percent of gross domestic product.

Yet for Mr. Johnson this is not an easy fight. The opposition Labour Party wants to go further and on Thursday its finance spokesman, John McDonnell, promised “investment on a scale never seen before,” outlining plans that would allow 55 billion pounds a year in extra capital spending.

And critics point out that this new approach is an implicit admission that the Conservatives got austerity wrong. Architects of the policy argue that it was needed to stabilize public finances after the financial crisis and huge bailout of the banking sector.

Others note that, while Mr. Johnson wants to recruit 20,000 new police officers, that would simply take the numbers up to where they were when his Conservatives took power in 2010.

“Whether or not you think austerity was the right policy in macroeconomic terms, what we are seeing now is an admission that the way it was implemented was wrong because it proved politically unsustainable,” said Jonathan Portes, professor of economics at King’s College, London.

“There is no economic rationale for cutting 20,000 police officers and then deciding a few years later that you need to hire 20,000 to get back to where you were,” he said. “It’s just a stupid way to run the country.”

Carys Roberts, chief economist at the Institute for Public Policy Research, a center-left think tank, sees increased spending as a political expedient for the Tories rather than a fundamental shift.

“I don’t think the Conservative Party has had some kind of Damascene conversion,” she added. “I think they are in election mode and realize that the country is tired of austerity and tired of underinvestment in public services.”

“The problem is that they haven’t yet announced how they will fund it in the long term,” she said.

Inside the Conservative Party there is concern about sacrificing a reputation for sound economic management cultivated by the sober former chancellor, Philip Hammond, nicknamed “spreadsheet Phil.” For one thing, it makes it harder to accuse the Labour Party of profligacy or, as it did in 2017, of believing in a “magic money tree.”

The other question is whether it will work.

“One of the lessons that the Tories have taken from the Brexit referendum campaign is that the long tail of austerity had really impacted on towns and communities and so this is part of their strategy to remake the Conservative Party as the Brexit Party,” said Ms. Gaston, referring to the populist party led by Nigel Farage who wants a quicker and sharper break with the European Union.

But it is far from assured that Mr. Johnson will win over voters who might have spent a lifetime supporting Labour and remember how the Tories, under Mrs. Thatcher, sacrificed thousands of jobs in manufacturing and mining.

Some of those ready to desert Labour might be more inclined to vote for Mr. Farage, a down-to-earth, beer-drinking rabble rouser, rather than the stuffier Tories.

“It is fragile to some degree,” said Ms. Gaston, adding that focus groups in the north of England showed that “the Tory brand is very much haunted by the legacy of Thatcher and is anathema to a lot of those people they are trying to seduce.”