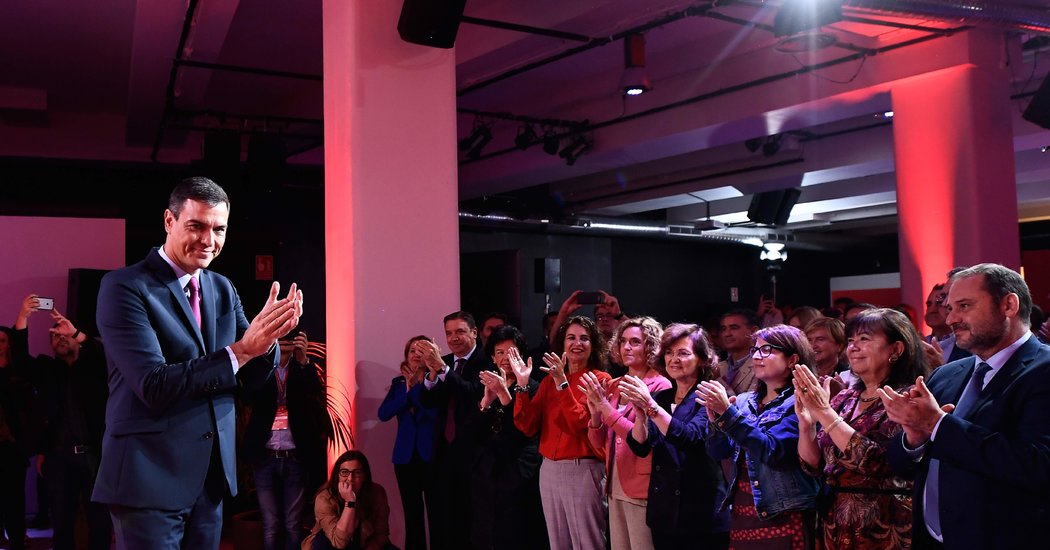 MADRID — In September, Pedro Sánchez, Spain’s caretaker Socialist prime minister, called off coalition talks with a smaller left-wing party, Unidas Podemos, saying that he “could not have slept at night” if he had allowed its more radical politicians into his government.

It is unclear, however, that Mr. Sánchez has been able to sleep better since.

The acrimonious breakdown of talks to form a government is forcing Spain to hold its fourth national election in four years, a vote that will take place on Sunday. And the latest opinion polls suggest that the outcome is too close to call, with no single party likely to come near to winning a parliamentary majority.

The vote could plunge Spain into another round of tortuous coalition talks that would prolong the political sclerosis.

Mr. Sánchez and his Spanish Socialist Workers’ Party remain in the lead, according to pollsters, but the repeat election provides an unexpectedly early opportunity for right-wing parties to benefit from the bickering among left-wing politicians. One of the parties most likely to reap such gains is the anti-migration and ultranationalist Vox party, which entered Parliament after winning 10 percent of the vote in the last election, in April.

Writing in El Confidencial, Ignacio Varela, a columnist, warned that the new election was likely to result in a lower turnout, more deadlock and more extremism. “Right now,” he wrote, “the only party that has reasons to celebrate is Vox.”

The election in April produced a near-record turnout of 76 percent, which helped Mr. Sánchez, who had mobilized left-wing voters to oppose the far-right threat of Vox. But most pollsters warn that in the election on Sunday, about one-third of the electorate is undecided about whom to vote for.

That could lead to even lower participation, especially when coupled with increasing frustration among voters about their party leaders’ inability to form a government, let alone resolve the lengthy separatist conflict in Catalonia.

Four years ago, Spain’s two-party system turned into a much more fragmented landscape, with five parties, led by younger leaders, winning at least 10 percent of the vote. But this new generation of politicians has shown little inclination to work together in a coalition government, leaving Spain in deadlock at a time when Europe’s economy is showing worrying signs of a slowdown.

“Spain would benefit from having a stronger government capable of confronting problems, but I don’t see any rapid end to our crisis of governance,” said Jaime Pastor, a professor of politics at the UNED University.

“We have a paradoxical situation in which the leaders have gained almost absolute control over their own parties, but are mostly losing the trust of voters and seem unwilling to compromise and unable to negotiate any kind of agreement,” he added.

When the talks with Unidas Podemos collapsed, Mr. Sánchez gambled that voters would give him a stronger negotiating mandate, after his Socialists won the election in April but did not gain a parliamentary majority. Mr. Sánchez was also comforted at the time by a further splintering among politicians on his left, as one of the founders of Podemos broke away to set up his own formation.

But then nine former separatist leaders of Catalonia were sentenced to prison last month for sedition, and the backlash in the northeastern region has returned Spain’s territorial conflict to the top of the agenda.

The sentencing unleashed not only peaceful mass protests, but also nights of violence during which the police fired tear gas and rubber bullets against protesters who set off bomb fires and threw rocks and Molotov cocktails at officers.

In view of the violence on the streets of Barcelona and other Catalan cities, right-wing parties have raised the pressure on Mr. Sánchez to use his executive emergency powers to restore law and order in the region.

“It seems to me that the Spanish government no longer really knows what it should be doing in Catalonia,” said Manuel Valls, a former prime minister of France who sits on the municipal council of Barcelona. “The polls are looking worse, Vox is rising, and this is turning into a very uncertain situation.”

Calm has returned to Catalonia this month, but, 4,500 Spanish police officers have been dispatched to the region to monitor the weekend election and avoid further turmoil.

And the Catalan question is not going away, with candidates homing in on the issue during the only televised election debate between the main candidates, on Monday. Albert Rivera, the leader of the anti-secessionist Ciudadanos party, held up a paving stone that he suggested had been thrown in Barcelona against the police, warning that the uncontrolled situation in Catalonia presented a “threat to democracy.”

Santiago Abascal, the leader of Vox, used his first televised election debate to demand that the Spanish government impose another period of direct rule from Madrid over Catalonia and ban all separatist parties for being “criminal organizations.”

He also peppered his remarks with xenophobic comments about migrants and Islam, which mostly went unanswered.

In defense of the constitutional values of Spain, the newspaper El País wrote in an editorial that Mr. Abascal’s intervention “should raise all alarm bells without delay.”

Before the April election, Pablo Casado, the leader of the Popular Party, called Mr. Sánchez a traitor and a felon for suggesting that a mediator could help resolve the Catalan conflict. But the party had its worst-ever showing in April, and Mr. Casado recently toned down his rhetoric in order to draw more moderate voters in Sunday’s election.

After the violence in Barcelona, Mr. Sánchez toughened his stance against the leaders of the independence movement. During the debate on Monday, he also promised to return to Spain Carles Puigdemont, the former Catalan leader who fled to Brussels in 2017 and is fighting another extradition request.

While the relationship between the governing politicians in Madrid and Barcelona has reached another low point, the separatist parties hope to turn the election on Sunday into an opportunity to strengthen their presence within the Spanish Parliament.

A good result will confirm “the failure of the Spanish government’s strategy to clamp down on Catalan Republican progress,” said Alfred Bosch, who oversees foreign affairs within the Catalan separatist government.

On Monday, Mr. Sánchez called on his rivals to accept the idea that whichever party wins the most votes on Sunday should be allowed to form the next administration.

But Mr. Casado reminded Mr. Sánchez that he himself had blocked the re-election of the previous Spanish prime minister, Mariano Rajoy, forcing Spain into another repeat election in 2016 and 10 months of political stalemate.