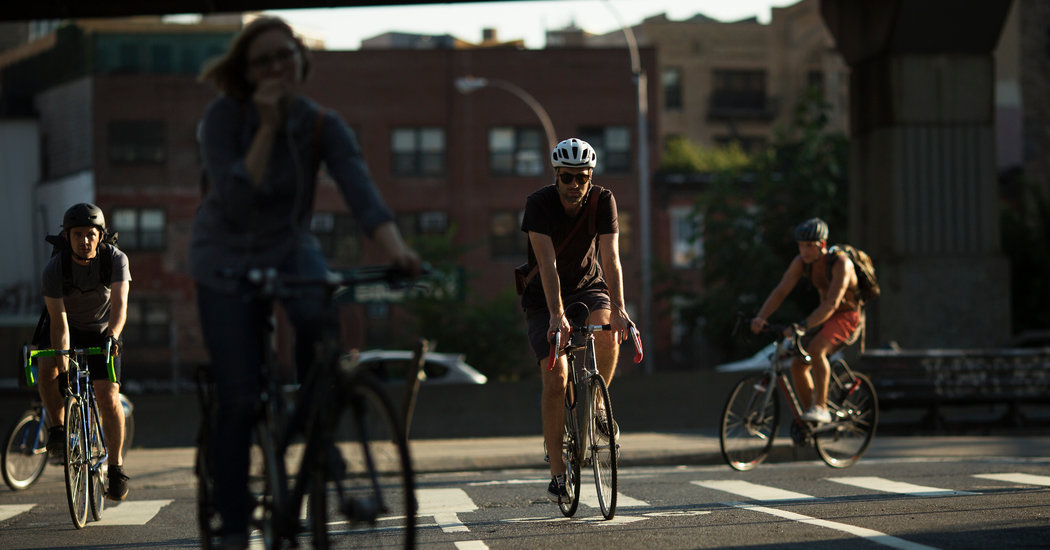 It is a message that was drilled into bicyclists when they were children learning to ride for the first time: Wear your helmet so that you do not crack your skull.

In some states, that is the law — for minors, anyway. But there are no statewide laws mandating that all cyclists, including grown-ups, wear helmets.

The National Transportation Safety Board begs to differ.

The federal agency this week presented the findings of a report on bicyclists’ safety and issued a recommendation “that all 50 states, the District of Columbia and Puerto Rico, require that all persons wear a helmet while riding a bicycle.”

But some biking enthusiasts disagreed. Their reasons touched on larger debates about the rights of cyclists, the responsibilities of drivers and the importance of individual rights in the face of systemic problems.

But helmets are good — right?

Yes, helmets help to protect cyclists from potentially serious injury. If you bike, you should wear one. Make sure it fits properly (with a snug strap, and the helmet level and low on your forehead) and is certified by the United States Consumer Product Safety Commission (look for a label).

The N.T.S.B. said research shows that less than half of bicyclists wear helmets, and that head injuries are the leading cause of bicycling fatalities. “If we do not act to mitigate head injury for more bicyclists, additional bicyclists will die,” the agency’s chairman, Robert L. Sumwalt, said in a statement.

Researchers found that helmets reduced the likelihood of serious head injury by 60 percent, and that in cases where it was known whether cyclists were wearing helmets, 79 percent of those who were fatally injured between 2010 and 2017 were not wearing them.

The National Highway Traffic Safety Administration said in a report last month that 857 cyclists were killed in traffic crashes last year, the highest number of fatalities since 1990.

To prevent those deaths, the report supported measures like clearer road markings and separate bike lanes.

“The investigators’ primary focus was on crash avoidance,” the N.T.S.B. statement said. “But in those instances when crashes do occur, they said the use of a helmet was the single most effective way for riders to reduce their chances of receiving a serious head injury.”

So what’s the problem?

For critics, the issue with the agency’s headgear recommendation was not necessarily that it promoted helmets but that it encouraged states to require them — perhaps by passing laws that would be enforced by tickets or fines.

The League of American Bicyclists, an advocacy group based in Washington, is opposed to that idea.

Mr. McLeod said that helmet laws might stop people from riding bicycles, which would make things like bike sharing programs unsustainable, discourage exercise and ultimately weaken the demand for other things that help cyclists, like protected bike lanes.

He said the laws could also be implemented in bad faith — for example, with the intent of keeping bicycles off the streets — and might be unevenly or unfairly enforced by local law enforcement agencies.

Jennifer Homendy, an N.T.S.B. board member, said the helmet recommendation was a small part of a very comprehensive report that devoted much of its focus to roads, drivers and cars.

She added that any mandatory helmet laws should involve cyclists’ input. “How we envision it is that the stakeholder community would be brought in, and they would talk about how all of this should be addressed,” she said.

What are the broader debates?

Ian Walker, a professor of statistics and traffic psychology at the University of Bath in England, said helmet policy could be a tricky subject.

“The issue of helmets just seems to kind of bother some people,” he said. “I can’t help suspecting that somehow it just troubles people because it feels like an affront to common sense.”

Dr. Walker lives in Britain, which does not mandate helmets for cyclists. More than a decade ago, discussions with other cyclists motivated him to begin a study in which he was the guinea pig.

He took to the streets and used a sensor to measure whether a helmet, which he wore about half the time, had any effect on drivers’ behavior — particularly, how much distance they gave him when they passed him on the street in more than 2,000 instances.

He found that a helmet seemed to make drivers come closer to him, increasing the danger. His findings were challenged by research from Australia in 2013; he responded with a rebuttal published last year.

Australia was an early adopter of helmet laws, and research there has found that after they were implemented, the rate of bicycle fatalities decreased by 46 percent. Still, those laws have been challenged, with some arguing that they simply keep more cyclists off the streets.

One key question, Dr. Walker said, is how far societies are willing to go to use legislation to protect people from themselves.

Ms. Homendy said the agency had heard similar critiques on a range of issues — from seatbelts to airbags to motorcycle helmets — for decades. “We have to look at solutions to ensure that we’re preventing crashes, preventing injuries and eliminating fatalities,” she said. “That’s our focus.”