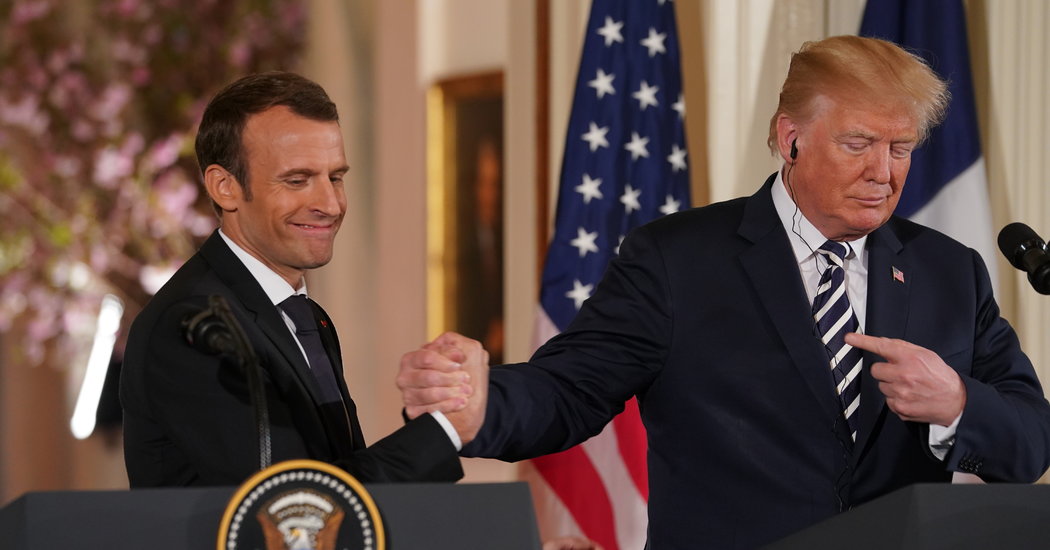 LONDON — Their bromance once made headlines. But on Tuesday, it was clear that the days of President Trump and President Emmanuel Macron of France trading cheek kisses and clasping hands were gone.

On the sidelines of a gathering for the 70th anniversary of NATO, Mr. Trump took his one-time friend to task, denouncing comments Mr. Macron made last month criticizing the American president’s leadership of NATO, and calling into question several of the French leader’s policies.

Mr. Trump is known for trying to build personal relationships with his counterparts, but he also has a penchant for public feuds, fueled in part by his off-the-cuff approach to the news media and his regular Twitter rants.

And Mr. Macron is just one of a handful of one-time buddies whose initial coziness with Mr. Trump has turned cold.

Macron: Dinner at the Eiffel Tower, then a scolding

The budding friendship between Mr. Trump and Mr. Macron was on full display in the summer of 2017, when the American president first traveled to France.

Mr. Macron pull out all the stops: a military parade, dinner at the Eiffel Tower and lots of hand holding. Despite their differences on a number issues, the pair poured on the charm.

During a later visit by Mr. Macron to the White House in April 2018, they kissed each others’ cheeks in a greeting, and at one point, Mr. Trump gently brushed what he said was dandruff from Mr. Macron’s shoulder.

They lavished praise on each other, and played down their disparate approaches to trade, immigration and climate change.

But by the end of last year, the relationship had begun to sour over policy differences. The kisses gave way to terse formalities and tight-lipped smiles whenever they met.

By early last month, Mr. Macron took off the gloves. He said that the United States under Mr. Trump appeared to be “turning its back on us,’’ and that a lack of American leadership and strategic coordination had led to NATO experiencing “brain death.’’

By the time the two leaders appeared together at a news conference on Tuesday, the bromance appeared to have run its course. At one point, Mr. Trump called Mr. Macron’s diplomatic response to a question “one of the greatest nonanswers I have ever heard.”

And in one particularly heated exchange, as the two discussed the containment of ISIS fighters in Syria, Mr. Trump tried to jokingly offer captive fighters to the French.

“Would you like some nice ISIS fighters?” Mr. Trump said.

When Mr. Trump met with President Jair Bolsonaro of Brazil in the White House for the first time in March, he had nothing but praise for the newly elected leader.

“I think Brazil’s relationship with the United States, because of our friendship, is probably better than it’s ever been by far,” Mr. Trump gushed.

Mr. Bolsonaro, a former army captain, had been criticized as an apologist for the military dictatorship that ruled Brazil for decades, and had made demeaning comments about women, minorities and homosexuals. But despite this, Mr. Trump welcomed him with warmth and promises that their personal relationship would help forge closer trade cooperation.

Their similarly brash personas and populist appeal had many predicting a harmonious future, and Mr. Bolsonaro soon made his close relationship with the American president part of the foundation of his diplomacy.

His son, Eduardo Bolsonaro, a lawmaker in Brazil’s lower house, even wore a baseball cap with the slogan Make America Great Again — Trump 2020 when he visited the White House.

But relations have apparently cooled. On Monday Mr. Trump pledged to slap tariffs on steel and aluminum from Brazil and Argentina, accusing both countries of manipulating their currencies at the expense of American farmers.

Mr. Bolsonaro on Tuesday said he would take the issue up directly with Mr. Trump. But the tariffs may make it difficult for the two to resume their once cozy relationship.

Trudeau: A fallout over trade

Mr. Trump and Prime Minister Justin Trudeau of Canada — who has won international praise for his gender-balanced cabinet and progressive policies — seemed unlikely to develop a close friendship. But for Mr. Trudeau, getting along with the powerful neighbor to the south is a priority.

So soon after Mr. Trump’s election, the Canadian prime minister embarked on a charm offensive, inviting Mr. Trump’s daughter, Ivanka, to take part in a meeting of female business leaders, for example. At least for a while, this kind of outreach seemed to work.

During Mr. Trudeau’s first visit with Mr. Trump at the White House in 2017, the leaders exchanged niceties and talked around policy issues. Mr. Trump later spoke of their “great personal relationship” when negotiations for a new North American Free Trade Agreement began.

The issue of trade, though, would prove their downfall.

Their breakup began in May 2018, when Mr. Trump announced that he was expanding tariffs on steel and aluminum to include Canada, the biggest exporter of the two metals to the United States. Canada returned the favor, swiftly announcing its own tariffs on $12.8 billion worth of American goods.

A tense phone call followed — in which Mr. Trump brought up unfounded accusations of 200-year-old acts of aggression by Canada against the United States. By the time the Group of 7 summit meeting rolled round in June 2018, they were no longer holding back.

“Canadians are polite, we’re reasonable but we also will not be pushed around,” Mr. Trudeau said.

Mr. Trump bailed on the meeting early, and sent a pair of tweets calling Mr. Trudeau “very dishonest & weak.” He said the United States would not sign the agreement that the other participants had agreed on.

Abe: A courtship through golf but few tangible results

“We got to know each other very, very well” on the golf course, Mr. Trump told reporters in 2017.

Aligning himself to Mr. Trump has been a critical part of Mr. Abe’s strategy to secure a beneficial bilateral trade deal with the United States, an agreement Mr. Trump had vowed would “be something very exciting.” And when Mr. Trump visited Tokyo, Mr. Abe described the occasion as an opportunity to enshrine the “unshakable bond” between them.

But Mr. Trump spent much of his time during that visit focusing on domestic issues, and in some cases his own grievances rather than relations with Japan.

And despite the dinners and time together, the two have been able to agree on only a limited trade deal that leaves out Japanese cars, industrial goods from the United States and farm products like rice, butter and sugar.

For Mr. Abe, the question is whether his investment in courting Mr. Trump has been worth it.