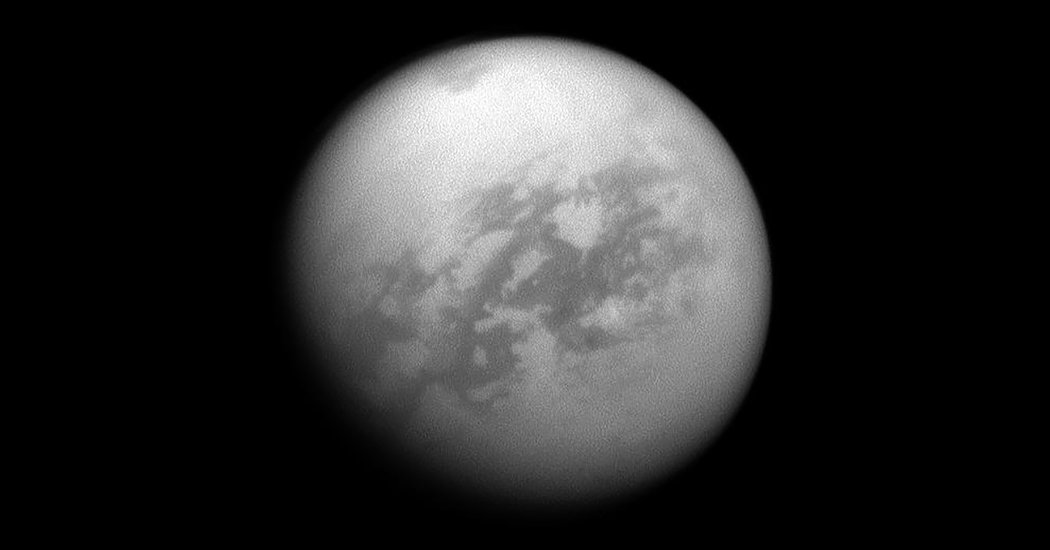 How weird can nature get?

Try Titan, Saturn’s largest moon, almost 900 million cold miles from the sun and even further, perhaps, from the feeble limits of human imagination.

This is a world where it rains gasoline. Soot drifts down like snow and is mounded into dunes by nitrogen winds. Rivers have carved canyons through mountains of frozen hydrocarbons, and layers of ice float on subsurface oceans of ammonia. A chemical sludge that optimistic astronomers call “prebiotic” creeps along under an oppressive brown sky. Besides Earth, Titan is the only world in the universe that is known to harbor liquid on its surface — and everything that could imply.

For almost four centuries, Titan was just a mysterious brown dot in the sky. Then, in 1980, Voyager 1 swerved by the moon on the way out of the solar system and radioed back evidence of a smoggy atmosphere four times denser than Earth’s. Time, technology and human ingenuity have since revealed that dot, Titan, to be a natural wonderland. Last month in Nature Astronomy, planetary scientists and geologists from NASA’s Jet Propulsion Laboratory and Arizona State University, led by Rosaly Lopes of J.P.L., published what they called the first geologic map of the distant, frigid world.

Scores of those features already have names, such as Kraken Mare, Titan’s largest sea, which is named after a Norse sea monster. (Astronomers long ago exhausted Shakespeare and Greek mythology as nomenclature sources. On Titan the naming protocol includes planets from Frank Herbert’s “Dune” novels and imaginary rivers from other fictional worlds.)

Water is the key to Life As We Know It, which is why NASA’s exoplanet searches are oriented toward finding planets warm enough to harbor oceans or lakes. But some investigators in the hopeful field of astrobiology — “hopeful,” because so far the only known astral creatures live on the biosphere called Earth — speculate that there might exist a Life As We Don’t Know It thriving on some other liquid.

And so Titan, with its rains, rivers, lakes and subsurface ocean of ammonia and water, has risen to the top of the list of homes for Possible Weird Life Out There. Awash in organic materials, Titan is thought by many scientists to resemble in some ways the early Earth before evolution caught on. But stuck in a deep freeze, everything on Titan moves much more slowly.

NASA and planetary scientists have been dreaming up robot missions to Titan — including sending a boat or submersible to Kraken Mare — for a decade or so, ever since Cassini verified the presence of lakes there. The agency has now settled on a plan that is only slightly less romantic. An aircraft called Dragonfly would utilize the moon’s relatively thick atmosphere to hop around and inspect different regions, with the aim of figuring out how this world, with its strange weather and chemistry, works.

Dragonfly would launch from Earth in 2026 and land on Titan in 2034, on the Shangri-La dune fields (their actual name) near the moon’s equator. Over the next three years, Dragonfly — a dronelike helicopter with eight rotors — will skip from site to site, poking, measuring and taking it all in. Dragonfly will end its journey about 100 miles away in the Selk impact crater, which, studies suggest, once held water and organic material.

What else might lie there, waiting to be born, remains to be seen.