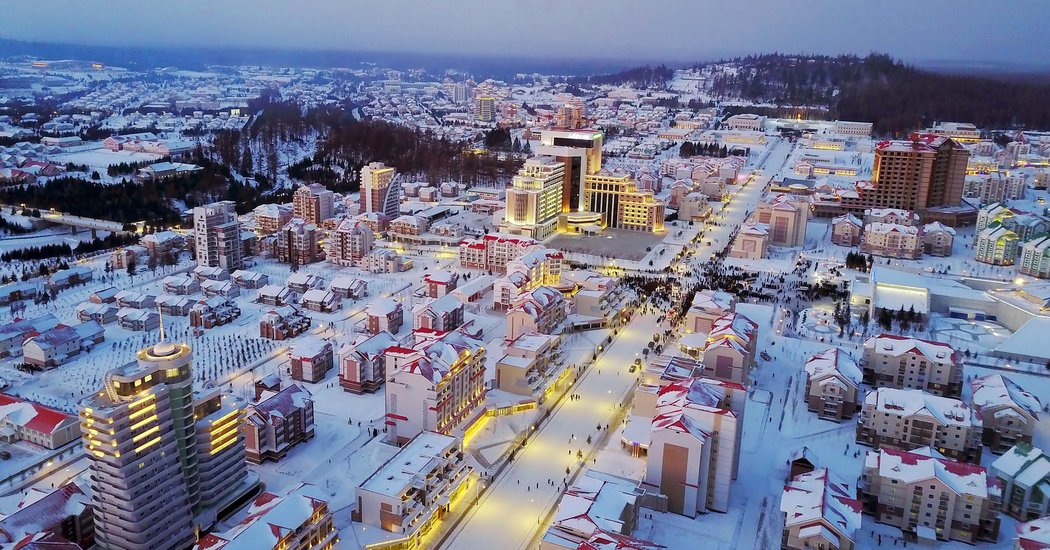 SEOUL, South Korea — North Korea said on Tuesday that its leader, Kim Jong-un, had opened a new mountain resort this week, calling it “an epitome of modern civilization,” as the isolated country tries to attract more foreign tourists to blunt the pain of international sanctions.

Mr. Kim attended the ribbon-cutting ceremony of the Township of Samjiyon County, near the North’s central border with China, the North’s official Korean Central News Agency reported on Tuesday.

Celebrating a set-piece propaganda moment presented as the culmination of a yearslong effort, the agency carried photos showing crowds gathered in a snow-covered resort town, with balloons and fireworks in the sky.

Since he took over North Korea following the death of his father, Kim Jong-il, in late 2011, Mr. Kim has promised to rebuild his country’s moribund economy, allowing more market activities and launching a building boom in Pyongyang, the capital, and elsewhere. Tourism is excluded from the sanctions that the United Nations has imposed on the North, which prevent it from earning hard currency by exporting its coal, iron ore, fisheries and textiles.

​Transforming Samjiyon​ from a decrepit holiday town into a modern resort complex complete with ski slopes, spas and hotels has been one of ​Mr. Kim’s pet projects. The town is on the slopes of Paektusan (also spelled Baekdusan), a mountain on the border with China that many Koreans regard as the birthplace of their country and North Korean propaganda declares the birthplace of Mr. Kim’s father, a claim historians refute.

In his annual ​New Year’s Day address this year, ​Mr. Kim called on his country to turn Samjiyon into “an ideal socialist village​.” He has visited the construction site several times in recent years.

But the project has been plagued by a lack of electricity, construction materials and other resources aggravated by the United Nations sanctions. Mr. Kim mobilized troops and what were called “loyalty donations” from his people to press ahead with the project. ​Defectors from the region have reported that electricity and workers were diverted to Samjiyon from surrounding towns as the authorities struggled to meet Mr. Kim’s construction deadline.

Tourism is likely to become even more important to the North’s economy in the coming months. Under the United Nations’ sanctions resolutions, countries like China and Russia must send home all North Korean workers, another key source of cash for Mr. Kim’s regime, by the end of this month.

Visitors have been one way for Beijing, which does not want its Communist ​neighbor to collapse, ​to extend a lifeline. Last year, 1.2 million Chinese tourists visited North Korea, a 50 percent increase from 2017, providing badly needed cash for Pyongyang, according to the Korea Trade-Investment Promotion Agency in Seoul, citing Chinese customs data.

Recent visitors to Pyongyang said the number of Chinese tourists ​there ​was on the rise, especially after President Xi Jinping’s visit to Pyongyang in June. It was easy to spot Chinese tourist groups in Pyongyang and ​​it has ​often become difficult to book flights and buy train tickets between North Korea and China​, they said​.

Mr. Kim made the economy a top priority of official policy in April 2018, two months before he met with President Trump in Singapore, retiring his father’s songun, or military-first, strategy, which focused national resources on building up the armed forces, including North Korea’s nuclear arsenal. ​

As his diplomatic efforts with Mr. Trump have faltered, Mr. Kim has increasingly emphasized a “self-reliant” economy, trying to boost domestic industries and mobilizing troops for building projects.

He has been particularly ​focused on building resort towns, a taste some analysts suspect he had acquired when he studied in Switzerland in his teens.

​In Wonsan, an east coast town, he is building a large summer tourist complex that includes beachfront hotels, water parks and golf courses. In October alone, he visited Samjiyon, a resort town in Diamond Mountain and a hot-spring resort in Yangdok to encourage the resort-planners there.

In Diamond Mountain, ​he ordered the demolition of ​South Korean hotels and other buildings ​there that the two ​Koreas once operated together.

Mr. Kim began pressing South Korea to reopen the complex last year, when he first met with the South’s president, Moon Jae-in. But ​when ​the South ​balked, Mr. Kim said North Korea would rebuild the town on its own. North Korea has recently invited tourists from China and other countries to the mountain for hiking trips, according to news reports.

Because he assumes there will be no immediate lifting or easing ​of ​sanctions, Mr. Kim has sought to weather them by promoting tourism, analysts said. At the same time, North Korea gave the United States by the end of this month to return to the negotiating table with a more flexible proposal​ on how to end its nuclear weapons program​. The North has threatened to abandon diplomacy and perhaps resume missile and nuclear tests if that deadline is not met.

“What is left to be done now is the U.S. option and it is entirely up to the U.S. what Christmas gift it will select to get,” Ri Thae-song, a vice foreign minister of North Korea who handled United States affairs, said on Tuesday.