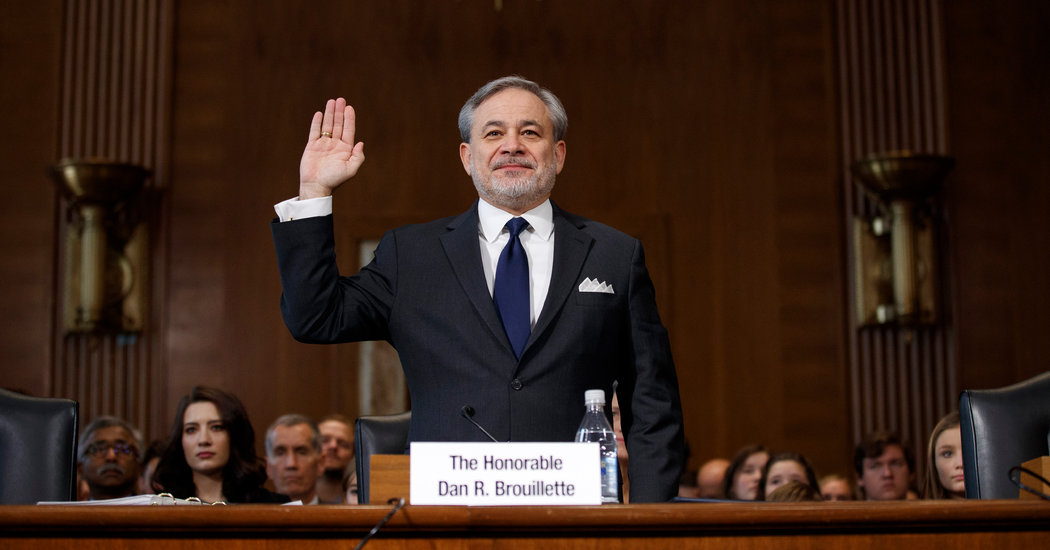 WASHINGTON — The Senate on Monday confirmed Dan Brouillette, a former lobbyist for Ford Motor Company, to be President Trump’s second secretary of energy, replacing Rick Perry, who has become embroiled in the impeachment proceedings against Mr. Trump.

Since 2017 Mr. Brouillette has been Mr. Perry’s second-in-command at the Department of Energy. He has pressed the Trump administration’s policy of “energy dominance,” which includes the rapid expansion of oil and gas drilling and a bolstering of American fossil fuel exports.

“I’m proud to have been a small part of the incredible success we have seen in American energy,” Mr. Brouillette told lawmakers at his Senate confirmation hearing in November.

While Mr. Brouillette sailed through a confirmation vote before the Senate Energy and Natural Resources Committee last month, lawmakers on Monday criticized him for not answering questions about Mr. Perry’s dealings in Ukraine.

“He’s up to this enormous task. He’s a good man,” Mr. Manchin said.

Senator Lamar Alexander, Republican of Tennessee, praised both Mr. Perry and Mr. Brouillette. He said he hopes to see continued funding increases for Energy Department research centers such as the Oak Ridge National Laboratory in his state.

“He understands the important work being done there,” Mr. Alexander said.

Mr. Brouillette has promised to fight for the Department of Energy’s budget, even though the administration in the past has proposed cutting some agency programs by more than half and eliminating key research and development programs like the Advanced Research Projects Agency-Energy. The bulk of the department’s budget goes to nuclear weapons research, development, maintenance and cleanup.

He also has walked a fine line on climate change. Mr. Brouillette has described planetary warming as “something we need to work on” but has questioned the scientific consensus that climate change poses a serious threat. He has promoted statistics that show American emissions have fallen 13 percent since 2005, but he also is a critic of the Paris Agreement, a pledge among nearly every nation to curb emissions that Mr. Trump intends to abandon next November.

Mr. Brouillette has argued that reductions of planet-warming greenhouse gas emissions in the United States are being nullified by rising emissions in China.

In replacing Mr. Perry, Mr. Brouillette becomes the latest lobbyist and seasoned second-in-command to take over for an embattled, higher-profile cabinet secretary.

Mr. Perry, a former Texas governor who once embraced abolishing the Energy Department, has largely avoided scandal, and Mr. Trump has at various times reportedly considered him for other high-profile posts in the administration. Mr. Perry has returned the admiration, saying recently that Mr. Trump was “ordained by God” to lead the country.

But in recent weeks, Mr. Perry has emerged as a player in the impeachment proceedings against Mr. Trump, facing scrutiny over his role in promoting energy exports to Ukraine and whether he was involved in the withholding of military aid to the country.

Sunday was Mr. Perry’s final day in office, and he released a farewell video saying his service as energy secretary had been a “wonderful, fabulous trip.” He applauded his country’s status as the world’s top oil and gas producer.

Before becoming deputy energy secretary, Mr. Brouillette was chief of staff to the House Energy and Commerce Committee and was assistant secretary of energy for congressional and intergovernmental affairs in the George W. Bush administration.

He also worked as an executive at the United Services Automobile Association, a financial services provider to members of the military, and Ford Motor Company. He once was a member of Louisiana’s State Mineral and Energy Board.

Mr. Brouillette is a Louisiana native and a graduate of the University of Maryland. He and his wife, Adrienne, are United States Army veterans and longtime Republican donors. According to OpenSecrets.org, a website that tracks money in politics, Mr. Brouillette and his wife gave $30,000 to the Republican National Committee in 2012 and more than $50,000 to Republican candidates, including Mr. Perry, between 2005 and 2016.