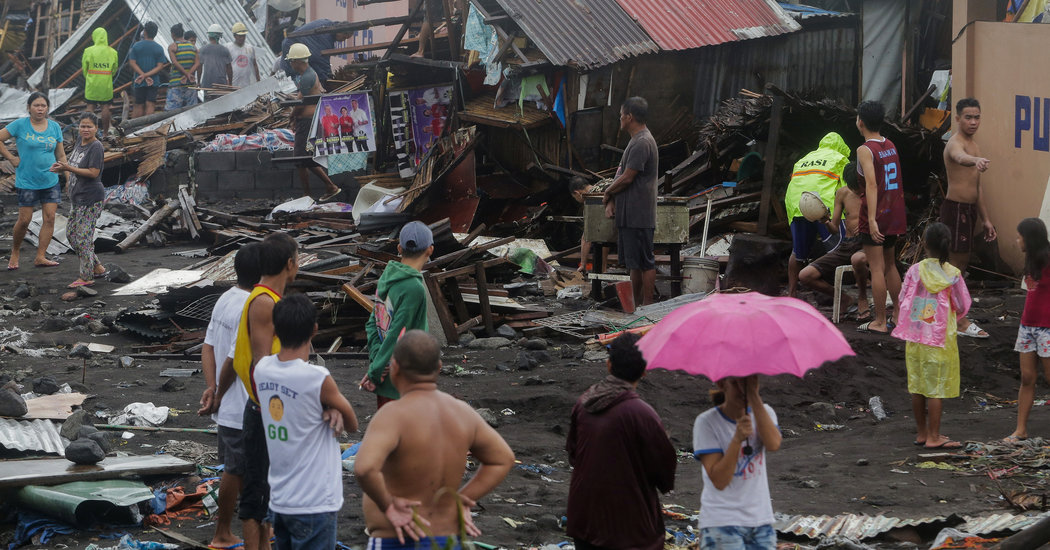 Typhoon Kammuri swept through the Philippines on Tuesday, ripping rooftops from houses, knocking down power lines and leaving a half-million people huddled in evacuation centers, waiting for the storm to pass. At least one person was killed.

Manila airport was ordered shut for 12 hours and nearly 500 flights were canceled. Officials suspended marine traffic in affected areas as Kammuri, packing wind gusts as high as 150 miles per hour, battered the Philippine archipelago for a second day.

In Albay, a province in southeastern Luzon, the largest and most populous Philippine island, Gov. Al Francis Bichara said the fierce winds caused more damage than the rain.

“Right now there’s no electricity, the cables had fallen, but it’s calm now,” he said, speaking to a Manila radio station.

A man who was preparing his home for the storm was electrocuted and died when a damaged wire touched his galvanized metal roof, the Philippine National Police said.

Across the archipelago, officials said the evacuations of hundreds of thousands of people from exposed areas had lessened the impact of the storm on civilians.

Still, the authorities warned of storm surges up to three feet and floods and landslides from the wind and rain in the mountainous countryside.

Across metropolitan Manila, government offices and schools were closed. And heavy rain was forecast for the coming days.

The Games are scheduled to run through Dec. 11, and already several outdoor events have been canceled or postponed until later this week, when the typhoon is expected to move on. Sports like windsurfing, beach volleyball and canoe-kayak racing were either suspended or postponed, while others were held ahead of the storm’s arrival.

Kammuri, known locally as Tisoy, is the 20th storm to hit the Philippines this year.