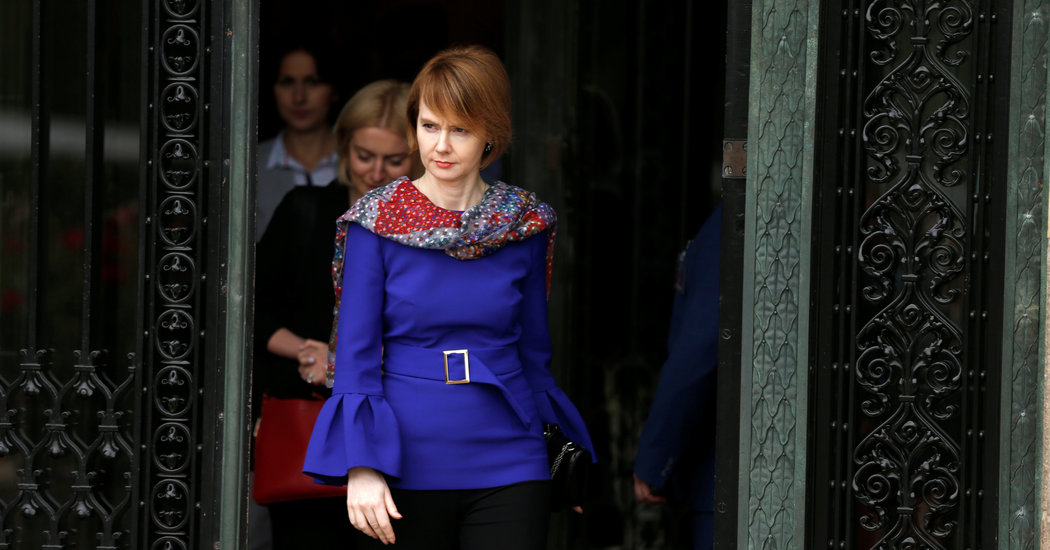 KYIV, Ukraine — As deputy foreign minister, it was Olena Zerkal’s job to read incoming diplomatic cables from embassies around the world. One from Washington caught her eye back in July, she recalled: It said the Trump administration had frozen military aid for Ukraine.

“We had this information,” Ms. Zerkal said in an interview. “It was definitely mentioned there were some issues.”

The timing of when Ukraine knew of the hold on the military aid is a critical question in the impeachment hearings in Congress. Democrats are trying to build a case that President Trump pressured President Volodymyr Zelensky by withholding the aid and a White House meeting — at the same time he was pressing for a public announcement that Ukraine would investigate his political rivals.

Mr. Trump and his allies have also made the timing issue part of his defense. How could Ukrainian officials feel the pressure of the aid freeze, they ask, if they did not know about it when the White House was pushing them to investigate Vice President Joseph R. Biden Jr., one of Mr. Trump’s biggest challengers in the 2020 American presidential election?

Ms. Zerkal’s account is the first public acknowledgment by a Ukrainian official that senior figures in Kyiv knew about the aid freeze during the Trump administration’s pressure campaign — and that the Zelensky administration sought to keep that fact from surfacing to avoid getting drawn into the American impeachment debate.

She said her own government blocked a trip she had planned to Washington to meet members of Congress in October, worried she would discuss matters related to impeachment and drag its president into an inquiry he has been eager to avoid.

“They worried about this,” she said of Mr. Zelensky’s advisers. “They said, ‘This is not the time for you to travel to D.C.’” The cancellation of her trip was confirmed by Congressional aides.

Mr. Zelensky, whose government is still dependent on the Trump administration for aid and diplomatic backing, has said he did not learn of the aid freeze until before a meeting with Vice President Mike Pence on Sept. 1, though he has been vague about exactly when.

But according to testimony in the impeachment inquiry, Ukrainian diplomats in Washington knew there was a problem with the aid as early as July 25, the day Mr. Trump spoke with the Ukrainian president by phone and asked him to investigate his rivals.

In the interview, Ms. Zerkal, who said she resigned from her post last week to protest her government’s back channel diplomacy with both the Trump administration last summer and Russia this fall, provided an insider’s account of when senior officials in Kyiv learned of the freeze, and how they tried to keep the information from becoming public.

Her account is backed by Laura K. Cooper, the American deputy assistant secretary of defense for Russia, Ukraine and Eurasia, who said in Congressional testimony during the impeachment inquiry that Ukrainian diplomats knew about the aid freeze at least by July 25, when they began to question United States officials about it.

That was the same day Mr. Trump spoke by phone with Mr. Zelensky and asked the Ukrainian leader to do him the “favor” of investigating the activities of Mr. Biden and his son, Hunter Biden, as well as a discredited theory that Ukraine, not Russia, hacked into Democratic servers during the 2016 presidential election.

Ms. Zerkal says she became aware of the hold by July 30, a few days after Mr. Trump’s phone call with Mr. Zelensky.

She said she read a diplomatic cable from Ukrainian officials in Washington about the hold and asked for a meeting with a senior aide to Mr. Zelensky to discuss it on July 30. The cable had been sent the previous week, she said, but she could not confirm the precise date it had been transmitted.

The Ukrainian presidential administration was copied as a recipient of the cable from the embassy in Washington, she said, adding: “We received it simultaneously.”

Whether senior Ukrainian officials knew of the aid freeze before the July 25 phone call or not, the accounts of Ms. Zerkal and Ms. Cooper show that the Ukrainian government was aware of the hold on aid through several critical weeks in August as United States diplomats pressed Mr. Zelensky to make a public statement on the investigations.

Later, as the impeachment inquiry ramped up in the United States, Mr. Zelensky’s administration tried to squelch information that could embarrass or undercut Mr. Trump, Ms. Zerkal said.

At a meeting in September, Ms. Zerkal said, a senior aide to Mr. Zelensky told her to “keep silent” and avoid news media inquires on any topic.

The foreign minister appointed by Mr. Zelensky, Vadym Prystaiko, later blocked a planned visit to Washington by Ms. Zerkal in October, she said. His concern, she said, was that she would discuss information relevant to the impeachment proceedings — like when Ukraine learned military aid had been put on hold — with members of Congress.

Ms. Zerkal says she had arranged meetings with politicians from both parties, including Democratic Senators Robert Menendez of New Jersey and Chuck Schumer of New York, and Republican Senators Ron Johnson of Wisconsin and Ted Cruz of Texas, as well as with staff members of Speaker Nancy Pelosi.

The stated purpose of the meetings was to discuss American sanctions on Russia, but questions of when Ukraine became aware of the freeze on American aid could have come up.

“His main message to me was to keep silent, to not comment without permission,” Ms. Zerkal said of the aide to Mr. Zelensky, Andriy Yermak, who asked that she keep a low profile on all matters, not just those related to the United States. “They are in a very tricky situation and they understand this.”

Mr. Zelensky’s press office did not respond to questions about Ms. Zerkal’s account of how the government learned of the aid freeze or the reasons for canceling her trip to meet with members of Congress.

But Mr. Zelensky has insisted he wants to steer clear of the impeachment process and has signaled a desire for good relations with the Trump administration. Speaking in New York in September, he said he had not been pressured by Mr. Trump.

Later, at a news conference in October, Mr. Zelensky said he was not aware, at the time of his phone call with Mr. Trump on July 25, that military aid was frozen. On Saturday, he told journalists from Time magazine and three European publications, “look, I never talked to the president from the position of quid pro quo.”

But he also had pointed comments on the hold on aid. “We’re at war,” he said. “If you’re our strategic partner, then you can’t go blocking anything for us. I think that’s just about fairness. It’s not about quid pro quo.”

Ms. Zerkal’s account demonstrates just how hard, bordering on impossible, it is for Mr. Zelensky to avoid taking sides in the impeachment inquiry. If he is misleading people about his knowledge of the aid freeze, then he is damaging the Democrats’ case against Mr. Trump. If he admits knowing, he damages Mr. Trump’s case.

The Zelensky administration, Ms. Zerkal said, is most concerned about placating Mr. Trump, having decided that the impeachment inquiry will fail in the Senate and that Mr. Trump could be re-elected.

Indications had already been stacking up that Ukrainian officials knew well before the hold became public in August, first in a blog posted by the Atlantic Council on Aug. 14 and then in an article published by Politico on Aug. 28.

An associate of Mr. Trump’s personal lawyer Rudolph W. Giuliani, Lev Parnas, has said he warned of a possible aid freeze as early as May, though others who attended the same meeting have contested his account.

Army Lt. Col. Alexander Vindman, the top Ukraine specialist in the National Security Council, testified that he learned of a hold in early July. More United States officials became aware during a conference call on July 18, and the Office of Management and Budget put the hold in writing on July 25, shortly after Mr. Trump’s call with Mr. Zelensky.

Ms. Zerkal said she was alarmed to read of the freeze in late July. Ukraine is at war with Russian-backed separatists in two eastern provinces and considers the United States an ally.

“This information caught my attention,” she said. “Without your clear support and stance against Russian aggression we won’t be able, alone, to protect ourselves.”