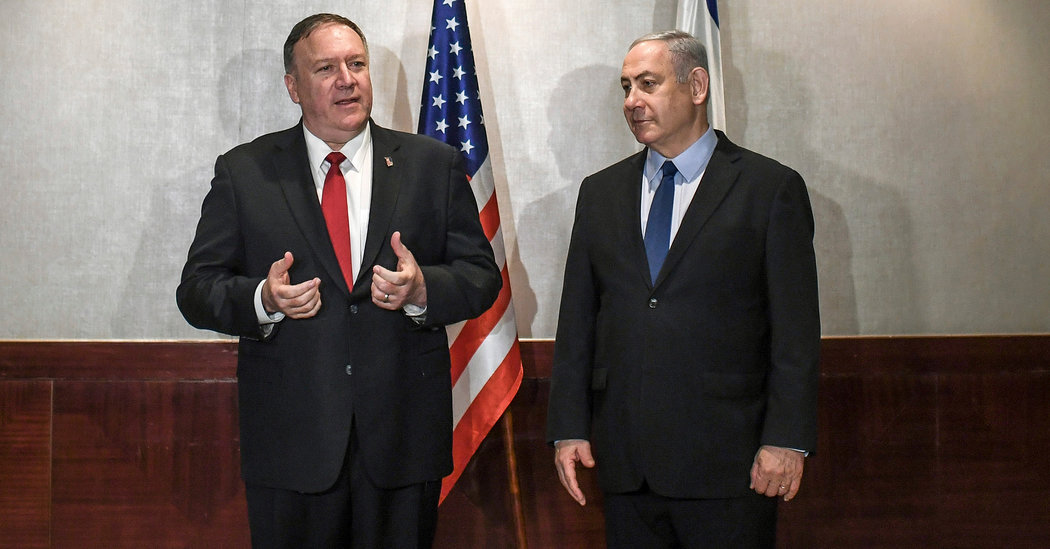 LISBON, Portugal — Protests in Iran and elsewhere in the Middle East prompted Prime Minister Benjamin Netanyahu of Israel and Secretary of State Mike Pompeo to hold hastily planned talks on Wednesday, aimed at ramping up pressure on Tehran and reducing its sprawling influence in the region.

But before the 90-minute meeting, the Israeli leader signaled he had other goals in mind as well: securing the Trump administration’s support for a defense treaty and, potentially, Mr. Netanyahu’s plans to annex the Jordan Valley.

The meeting itself appeared to yield few, if any, new resolutions. After it ended, the State Department said the two leaders discussed “Iran’s destabilizing influence in the region” and did not offer any additional steps in their shared maximum pressure campaign against Tehran.

“The first subject that I will raise is Iran, the second subject is Iran, and so is the third, and many more,” Mr. Netanyahu told reporters before the meeting began in Lisbon. He rushed to Portugal’s capital after repeatedly asking for the meeting while Mr. Pompeo was in Europe to attend a gathering of North Atlantic Treaty Organization leaders in London.

“Iran’s aggression is growing, but its empire is tottering,” Mr. Netanyahu said. “And I say, let’s make it totter even further.”

Mr. Pompeo has been at the forefront of the Trump administration’s so-called maximum pressure campaign against Iran. He said other diplomats at the NATO meeting were focused on how to keep the already-fragile Middle East stability from unraveling while protecting protesters in Iran, Iraq and to a lesser extent, Lebanon, who have been targeted by security forces or rival political groups.

“Some of these are people that are seeking freedom and a reasonable way to live,” Mr. Pompeo said, “and they recognize the threat that is posed by the kleptocrats that are running the Islamic republic of Iran.”

At least 180 people have been killed in protests that have convulsed Iran over the last two weeks, set off by a rise in gas prices and escalating into the worst violence in 40 years.

In Iraq, protesters have rallied for at least two months against corruption in a government that considers Iran a top ally and benefactor. More than 300 people have been killed, including at least 40 last week in demonstrations after leaked Iranian intelligence documents showed Iran’s hold over the Iraqi prime minister, Adel Abdul Mahdi. He has since promised to resign.

Before he left Israel on Wednesday morning, Mr. Netanyahu told reporters he also wanted to talk to Mr. Pompeo about two other issues: the prospect of a formal defense treaty with the United States and seeking the Trump administration’s blessing for Israeli annexation of most of the Jordan Valley.

“These are very important issues,” Mr. Netanyahu said. “We are dealing with them all the time.”

Resolving both issues could help Mr. Netanyahu in his political struggles at home, where he is struggling to form a unity government with his chief political rival, Benny Gantz, after a second inconclusive election this year. He is also under indictment on criminal charges of bribery.

Mr. Netanyahu sought the meeting with Mr. Pompeo after speaking to Mr. Trump on Sunday.

Forging a formal bilateral defense pact like the one Mr. Netanyahu is proposing has been considered — and ultimately shelved — by previous American and Israeli leaders.

Dennis Ross, who helped negotiate earlier peace efforts between Israel and the Palestinians during the Clinton administration, said the United States already has robust military agreements with Israel.

He predicted the Pentagon would be reluctant to support a formal treaty now — in part because it could be seen as a political boost to Mr. Netanyahu in a relationship that the American military wants to keep strictly professional.

Having a formal defense treaty could also raise the appearance that the United States was complicit in Israeli military campaigns in the Middle East, like against Palestinians or Iran, Mr. Ross said. It also could pull in American resources, including troops, to come to Israel’s defense if necessary, he said.

But he added, “What Israel does within the region — there will be times when the U.S. may not be even opposed to it, but doesn’t want to be held responsible for it.”

Israel’s security establishment — and Mr. Netanyahu himself, decades ago — has been wary of a formal defense pact for fear it could limit Israel’s actions.

Mr. Ross also echoed widespread predictions that Israeli annexation of parts of the West Bank would all but end hope for a peace plan with the Palestinians: “This one would really undercut any prospect for their plan,” Mr. Ross said.

Last month, Mr. Pompeo announced that the United States would no longer recognize a 1978 legal opinion in which the State Department concluded that Israeli settlements in the West Bank violated international law. The decision was broadly seen as an unspoken — but not explicit — green light to Israeli annexation of land.

Israel seized the West Bank from Jordan in the 1967 war. Most of the world considers it occupied territory and Israeli settlements or annexations there to be illegal.

Wednesday’s meeting also served as a demonstration by Mr. Netanyahu to try to prove he remains credible and relevant despite the charges against him, and that he will continue to lead Israeli interests in matters of foreign relations and national security.

Mr. Pompeo pointedly evaded questions from reporters in Lisbon about the defense treaty and whether the United States would not prevent Israel from annexing the Jordan Valley. Mr. Netanyahu, however, could not resist.

“It’s a very good place, the Jordan Valley,” Mr. Netanyahu responded over his shoulder, as he was being ushered from the room.