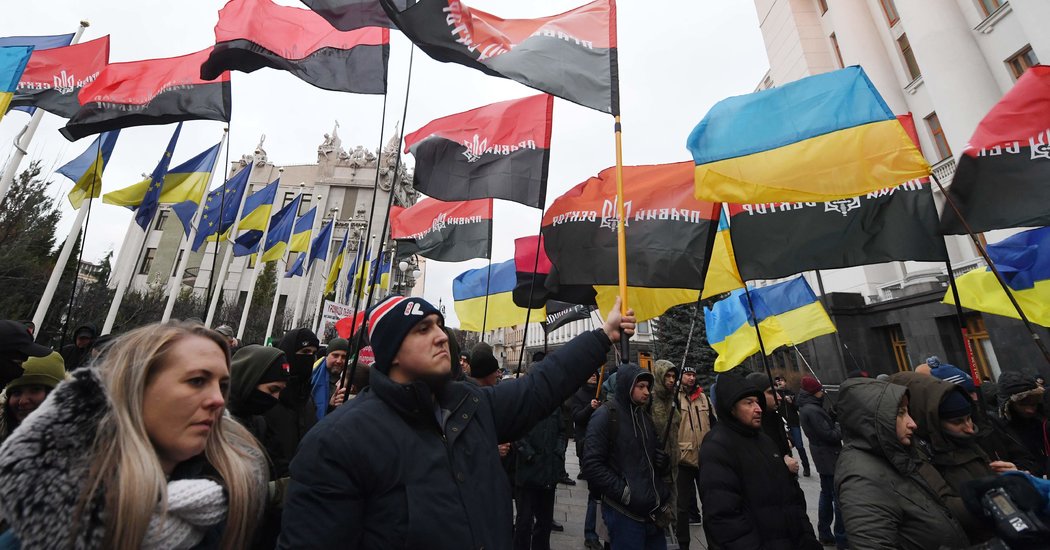 KYIV, Ukraine — Washington may be obsessed with the impeachment inquiry over President Trump’s dealings with Ukraine, but it was far from the minds of a few thousand protesters who gathered on a recent frosty night in Kyiv to vent their anger at their own country’s president, Volodymyr Zelensky, over his peace overtures to Russia.

If he struggled to resist demands by Mr. Trump for investigations affecting next year’s United States elections, some protesters said, imagine what will happen when he meets President Vladimir V. Putin on Monday for talks on ending the war in eastern Ukraine. As speakers derided Mr. Zelensky as soft on Russia, the crowd answered with cries of “No to capitulation!” and “Treason!”

Mr. Zelensky campaigned for the presidency on a two-plank platform of fighting corruption and ending a grinding war with Russian-backed separatists in eastern Ukraine that has killed at least 13,000 people.

While the peace effort has received less notice, it is undoubtedly the more politically treacherous of the two undertakings. Everyone is against corruption, in theory at least, but there are sharp divides over how to deal with Russia, which is widely despised by Ukrainians outside the breakaway eastern territories.

Domestic political opponents are concerned that Mr. Zelensky, having no clear American diplomatic backing, may be too willing to make concessions to Moscow in the talks. Any widespread perception that he has done so could weaken him politically, hampering his ability to follow through with his anticorruption efforts.

“If the president signs anything granting Russian influence in Ukraine, it would cause riots,” said Volodymyr Ariev, a member of Parliament in the party of former President Petro O. Poroshenko, which is in opposition to Mr. Zelensky.

Mr. Ariev said that the talks with the Trump administration over opening investigations related to the family of former Vice President Joseph R. Biden Jr. “were unprofessional, and that is why we are concerned about what will come” in talks with Russia.

Already, the critics say, Mr. Zelensky has made unilateral concessions intended to pave the way for the peace talks. And they are alarmed at comments by Ihor Kolomoisky, a businessman with ties to Mr. Zelensky, suggesting that Ukraine should swivel toward Russia amid the chaos in Ukraine policy in the United States.

In the worst-case scenario, they say, Mr. Zelensky would give amnesty to rebel leaders and grant sweeping autonomy to the breakaway regions, while allowing Russian forces to linger in or just outside Ukraine even after any political settlement.

In the peace talks, scheduled for Monday in Paris, most analysts see Russia seeking at a minimum to trade de facto control over the two separatists zones in eastern Ukraine for influence in domestic Ukrainian politics, including a veto on membership in the North Atlantic Treaty Organization.

In its post-independence history, Ukraine has twice tilted from pro-Western to pro-Russian governments, in 1994 and 2010. It’s a back-and-forth common to many former Soviet states as they have tried to play the powerful east-west geopolitical forces off against each other for advantage at home. In Ukraine’s case, on both occasions the country lurched back into the Western orbit, most recently in the Maidan revolution of 2014.

In recent years, Belarus, Georgia, Kyrgyzstan and Moldova have all at some point pivoted to closer ties with Russia — and then back, in some cases. In an interview, Mr. Kolomoisky said that Ukraine should do just that if America tries to pressure Kyiv again.

Analysts saw the comments as self-serving, in that Mr. Kolomoisky stands to lose billions of dollars under a banking sector overhaul backed by Western governments. Mr. Zelensky issued a statement distancing himself from the comment.

Working as an actor in Moscow in 2014 as Russian troops invaded his country, Mr. Zelensky joked that Russian soldiers were not moving inside Ukraine, but were “just standing on the border, and the Ukrainian border is just slightly pushed forward.”

But through the summer, Mr. Zelensky sought a White House visit to urge Mr. Trump to press Russia and side with Ukraine in the negotiations. It never materialized.

To the contrary, at a news conference in New York in September, Mr. Trump backed away from Mr. Zelensky and his troubles in the war, telling the Ukrainian leader, “I really hope you and President Putin get together and can solve your problem.”

By distancing himself from Mr. Zelensky in the negotiations, as stressed by many of the security professionals who testified in the recent impeachment hearings, Mr. Trump has raised doubts about how far he will go to support Ukraine and made it harder for the Ukrainian government to defend the concessions it is making to end the war.

Some analysts say that despite Mr. Zelensky’s weak hand going into the talks, worries of a pivot to Russia are overblown and mostly whipped up by domestic political opponents.

“Accommodation with Russia would be a very hard sell inside Ukraine,” Steven Pifer, a former United States ambassador to Ukraine, said in a telephone interview.

“They don’t think he is worthy of being president,” Mr. Yakovina said of Mr. Zelensky, who before his election as Ukraine’s leader played a president in a television series. They see him “as a clown from a television show. They are doing everything so he fails.”

To pave the way for talks, Mr. Zelensky rebuilt a bridge across the de facto border with the breakaway republics, pulled troops back from the front line in three locations, negotiated a prisoner exchange and agreed to the outlines of a political formula for an eventual settlement.

Mr. Zelensky has said that each step was worthwhile in its own right. He secured the return of Ukrainian captives, eased hardship for people living in separatist areas and ended some of the senseless skirmishing along the front.

In the settlement road map signed in early October, Mr. Zelensky agreed to a timeline for local elections and to other political steps needed to reintegrate the breakaway regions with Ukraine without any corresponding timeline for Russia to withdraw its troops. Mr. Zelensky says the Russian troop withdrawal is implied.

Three protests ensued on Independence Square — the largest of which drew about 20,000 people, far fewer than the gigantic crowds that gathered on the square in the 2014 revolution and drove the pro-Russian leader Viktor F. Yanukovych into exile in Moscow.

Mr. Vakarchuk pointed to polls showing that a majority of Ukrainians oppose a settlement on terms of the so-called Minsk agreements, the framework deal under which Mr. Zelensky will negotiate in Paris.

Under 20 percent of Ukrainians support the political framework that Mr. Zelensky is pursuing, about 25 percent want to continue fighting to free the separatists territory, and about 35 percent want to declare the regions as occupied by Russia but not pursue military efforts to recover them for now, according to a poll by Rating Group, which conducts social surveys.

Mr. Vakarchuk says he is consulting with Mr. Zelensky’s party in Parliament and would support any agreement that emerges from the Paris talks if it defends Ukrainian interests.

That will be harder to pull off with America distracted, though.

“For a long time, the United States was considered the leader of the free world, and I think that was fair enough,” Mr. Vakarchuk said. “But remember the Bob Dylan song — ‘The Times They Are a-Changin’.’”