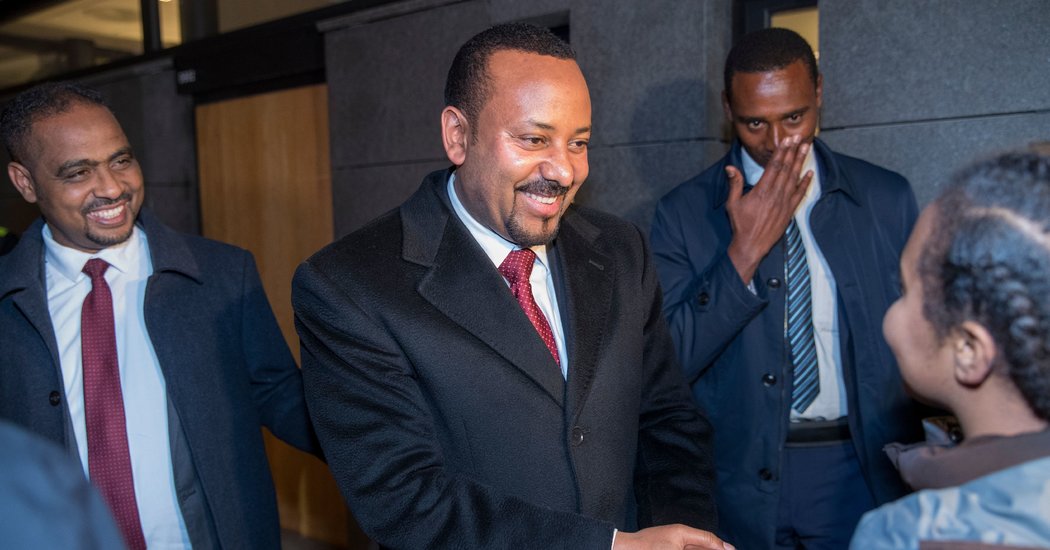 NAIROBI, Kenya — When the Norwegian Nobel Committee chose the Ethiopian prime minister, Abiy Ahmed, for its peace prize this fall, it cited his efforts to free his country from years of political repression by releasing political prisoners, legalizing outlawed opposition groups and “discontinuing media censorship.”

But when Mr. Abiy collects his prize in Oslo on Tuesday, he will not take questions from the news media, a move that breaks from tradition and has drawn criticism from the Nobel Committee.

Mr. Abiy won’t speak to reporters ahead of the awards ceremony or take questions after meeting with the Norwegian prime minister, Erna Solberg, Nobel officials said. He is also planning to skip an annual event where children perform for, and pose questions to, the peace prize laureate, hosted by Save the Children. Mr. Abiy’s minister of peace will attend on his behalf, the prime minister’s office said.

A spokeswoman, Billene Seyoum, said that Mr. Abiy had more pressing priorities and that such events were not in keeping with “the humble disposition of the prime minister rooted in our cultural context.”

But Mr. Abiy also has reasons to avoid scrutiny. Since winning the prestigious prize in October, he has faced criticism over his administration’s heavy-handed response to protests that grew after a prominent critic of Mr. Abiy accused the police of orchestrating an attack on him.

On Monday, a United Nations report sounded an alarm over a proposed new hate speech law. David Kaye, the United Nations special rapporteur on the right to freedom of opinion and expression, issued the report after visiting Ethiopia, saying the bill could give government officials “unbounded discretion” to prosecute and arrest people.

Mr. Abiy was awarded the peace prize for his initiative to resolve the decades-long border conflict with neighboring Eritrea, and for making significant political, economic, and social changes in Ethiopia, Africa’s second most-populous nation, since he came to power in mid-2018.

Mr. Abiy, for example, named women to top governmental positions and engaged in efforts to bolster peace in nations including South Sudan, Somalia and Kenya. In awarding him the prize, the Nobel Committee said his actions gave “many citizens hope for a better life and a brighter future.”

But the Nobel Committee has not hidden its disappointment with Mr. Abiy’s refusal to participate in its events. The committee’s chairman, Berit Reiss-Andersen, called it “regrettable” and “unfortunate,” according to the Norwegian Broadcasting Corporation.

The director of the Nobel Institute, Olav Njolstad, traveled last week to the Ethiopian capital, Addis Ababa, to try to change Mr. Abiy’s mind, but failed.

Mr. Abiy will give an acceptance speech and attend the Nobel banquet on Tuesday, as the guest of honor. The prize comes with about $1 million, a gold medal and a diploma.

Ms. Seyoum, Mr. Abiy’s press secretary, said of his decision to skip the media engagements, “It is quite challenging for a sitting head of state to dedicate that many days, particularly where domestic issues are pressing and warrant attention.”

The award comes during a fraught time for Ethiopia. Mr. Abiy faces a weak economy, regular outbreaks of deadly intercommunal violence and growing demands for statehood from numerous ethnic groups. He will be up for re-election next year.

William Davison, senior Ethiopia analyst with the International Crisis Group, said that Mr. Abiy’s decision to avoid the news media in Oslo “may be due partly to the acute domestic challenges the prime minister is facing.”

Even though Mr. Abiy “enjoys huge amounts of international good will that is not going to expire anytime soon,” Mr. Davison said, avoiding the media is “not a good look and should have been avoided.”

Though his time as prime minister began with moves to ease media censorship, his administration has recently resorted to “old tactics,” including shutting down the internet and arresting journalists, said Muthoki Mumo, sub-Saharan Africa representative for the Committee to Protect Journalists.

Given these concerns, Mr. Abiy’s “refusal to answer media questions as he receives the Nobel Peace Prize reflects his government’s disregard for the role of the free press in keeping the public informed,” Ms. Mumo added.