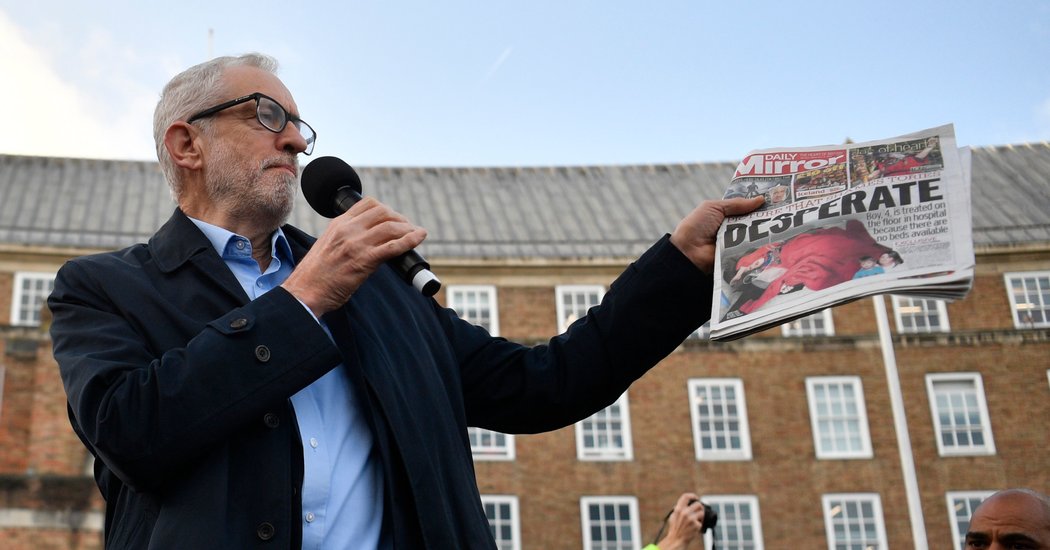 LONDON — The photo of a sick 4-year-old boy lying on the floor of an overcrowded hospital in Yorkshire because there were no beds available for him sent a jolt through the British election.

A local newspaper, the Yorkshire Evening Post, had published a story about the episode on Sunday after the boy’s mother reached out to share her outrage about the experience. The hospital, Leeds General Infirmary, confirmed that the incident had indeed happened, and issued an official apology.

Then on Monday, three days before Britain’s general election, the story was splashed on the front page of The Daily Mirror, a left-leaning tabloid, to criticize the health care policies of Prime Minister Boris Johnson’s Conservative Party. Later on Monday, Mr. Johnson was shown the photo in an awkward television interview with ITV that went viral online.

It all seemed like a fairly normal cycle of political outrage.

But since Monday evening, journalists and researchers have tracked what appears to be a social media campaign to discredit the boy’s family. A message was shared widely on Facebook and Twitter from somebody claiming to know a nurse at the hospital who said the mother had staged the photo.

“Very interesting,” the message reads. “A friend of mine is a senior nursing sister at Leeds Hospital.” It then goes on to say that the mother had deliberately put the boy on the floor.

It is not clear how widely the false claims were seen, especially because Facebook does not provide a way to track messages posted inside private accounts and groups. Many people posted the message as a screen shot, which also cannot be discovered through a word search. Among those sharing the message were public figures including Allison Pearson, a columnist for The Telegraph, and Kevin Pietersen, a retired cricket star.

The origins of the false information about the boy are murky. According to First Draft, a London-based group that tracks disinformation, the first known post was made on Facebook. But when The Guardian newspaper reached the woman thought to have written the post, she said her account had been hacked. “I’ve had to delete everything as I have had death threats to myself and my children,” said the woman, whose name was withheld by The Guardian to protect her privacy.

Efforts to reach the woman at what is believed to be her office were unsuccessful.

“It is clearly an attempt to disrupt and mislead the electoral process in the days before polling,” said Alastair Reid, a researcher at First Draft. “This is, without evidence, casting aspersions on a photo to cause further discord and distrust and division among social media users and voters.”

The episode highlights how questionable material can spread at the speed of a click, raising further concerns about the role of social media in elections. In this cyle of British campaigning, internet manipulation tactics have gone mainstream, adopted even by the political parties and candidates themselves, particularly the Conservative Party and Mr. Johnson.

At the Yorkshire Evening Post, the experience has been deflating. The reporter who wrote the initial story, Daniel Sheridan, followed standard journalistic techniques to confirm the accuracy of the information, including getting the statement from the hospital.

By Monday night, James Mitchinson, the editor who oversees the newsroom, said he had started to get messages from readers questioning the authenticity of the story, based on what they had read online. One woman wrote to him to say that she would no longer read the newspaper even though she had been a subscriber for many years.

He wrote back to the woman, who he said had been “unfairly manipulated and discombobulated by cynical social media messaging driven by dark forces,” and posted his response on social media.

In an interview, Mr. Mitchinson said, “I’ve never experienced anything quite like this where there is a coordinated, relentless attacking of the message.”

“We’re living in strange times,” he added, “where for whatever reason people are drawn to social media messages and come to trust them more than they trust their local newspaper who they have had a trusted relationship with probably all their lives.”

By Tuesday night, the paper had published its own response, with a blazing headline on the front page: “Don’t Be Fooled By Fake News.”