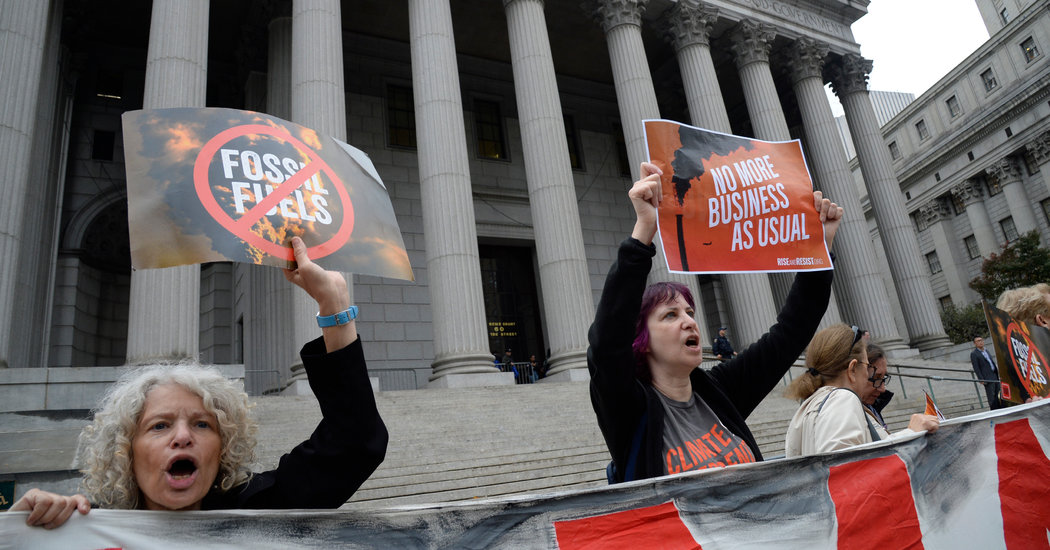 A New York state judge on Tuesday handed Exxon Mobil a victory in the civil case brought by the state’s attorney general that argued the company had engaged in fraud through its statements about how it accounted for the costs of climate change regulation.

After some four years of investigation and millions of pages of documents produced by the company, the judge said, attorney general Letitia James and her staff “failed to establish by a preponderance of the evidence” that Exxon violated the Martin Act, New York’s powerful legal tool against shareholder fraud, in the closely watched case.

In a statement, the company said “Today’s ruling affirms the position Exxon Mobil has held throughout the New York Attorney General’s baseless investigation. We provided our investors with accurate information on the risks of climate change. ”

In a statement, Ms. James said, “For the first time in history, Exxon Mobil was compelled to answer publicly for their internal decisions that misled investors.”

Exxon’s statement also said: “Lawsuits that waste millions of dollars of taxpayer money do nothing to advance meaningful actions that reduce the risks of climate change. Exxon Mobil will continue to invest in researching breakthrough technologies to reduce emissions while meeting society’s growing demand for energy.”

Throughout the 12 days of hearings, there were indications that the judge, Barry Ostrager, might rule against the state. He seemed frequently impatient with the presentation by the attorney general’s staff, and was fully engaged in the testimony from the company’s former chairman, Rex Tillerson.

In the lawsuit against the company, filed last year under Barbara Underwood, who was attorney general at the time, the state argued that Exxon had erected “a Potemkin village to create the illusion that it had fully considered the risks of climate change regulation and it had factored those risks into its business operations.”

The state argued that Exxon was essentially keeping two sets of books in regard to climate change: one presented to the public that accounted for the potential future costs and another internal set in which those costs were disregarded. The state was asking for as much as $1.6 billion to be paid in restitution to shareholders.

Exxon countered that it had developed a “robust” system for dealing with future climate costs, and that its statements about its accounting for such costs were not misleading.

The judge, who called the attorney general’s lawsuit “hyperbolic” in his decision, accepted Exxon’s argument that its internal practices to evaluate the possible costs of regulations of greenhouse gases on future projects “do not impact the company’s financial statements and other corporate books and records” at issue in the shareholder fraud charges. He said the state had presented no testimony that any shareholder had been misled, and that a company report that the state had argued was misleading was, based on evidence presented at trial, “essentially ignored by the investment community.” As a result, he said, the company had not made “any material misrepresentations” that would have misled a reasonable investor.

Judge Ostrager was careful to point out that the decision did not touch on the fossil fuel company’s possible role in global warming. “Nothing in this opinion is intended to absolve Exxon Mobil from responsibility for contributing to climate change in the production of its fossil fuel products,” he wrote. “But Exxon Mobil is in the business of producing energy, and this is a securities fraud case, not a climate change case.”

Merritt B. Fox, a professor of securities law at Columbia Law School, said that statement from the judge was “the gist of the decision,” because “the Martin Act is about securities fraud, not about evildoing by large corporations generally.” The Martin Act, he noted, gives attorneys general enormous power to launch investigations, and in many cases the investigations reveal embarrassing details that lead the target company to agree to a broad settlement with promises to alter their behavior in some way unrelated to securities. “This time, Exxon Mobil stuck to its guns, and the judge applied what the statute and law require: a demonstration of securities fraud by a preponderance of the evidence.”

While a powerful tool for attorneys general, the Martin Act was, ultimately, not right for this case, said Michael Gerrard, director of the Sabin Center for Climate Change Law at Columbia.

Lee Wasserman, director of the Rockefeller Family Fund, which has encouraged investigations into fossil fuel companies, said, “Regardless of how the company communicated its accounting practices to the public, Exxon’s multidecade climate deception has helped push humanity toward a desperate moment filled with suffering, death and grief. No court decision can change that reality.”

This is not the end of legal entanglements for Exxon Mobil and other fossil fuel companies over climate change.

A large number of cities and counties across the United States, as well as the state of Rhode Island, are pursing lawsuits against the oil industry seeking compensation for their costs in dealing with climate change. While some judges have met those cases with skepticism, including a federal judge in New York City, many of the cases are moving forward.

Another state case asserting that Exxon committed fraud, filed by the Massachusetts Attorney General, is still pending. That case resembles New York’s case in some aspects, but relies on that state’s laws, and a broader ambit of accusations concerning fraud and advertising. Chloe Gotsis, a spokeswoman for Attorney General Maura Healey, said, “we will continue our work to hold the company accountable for its misrepresentations.”