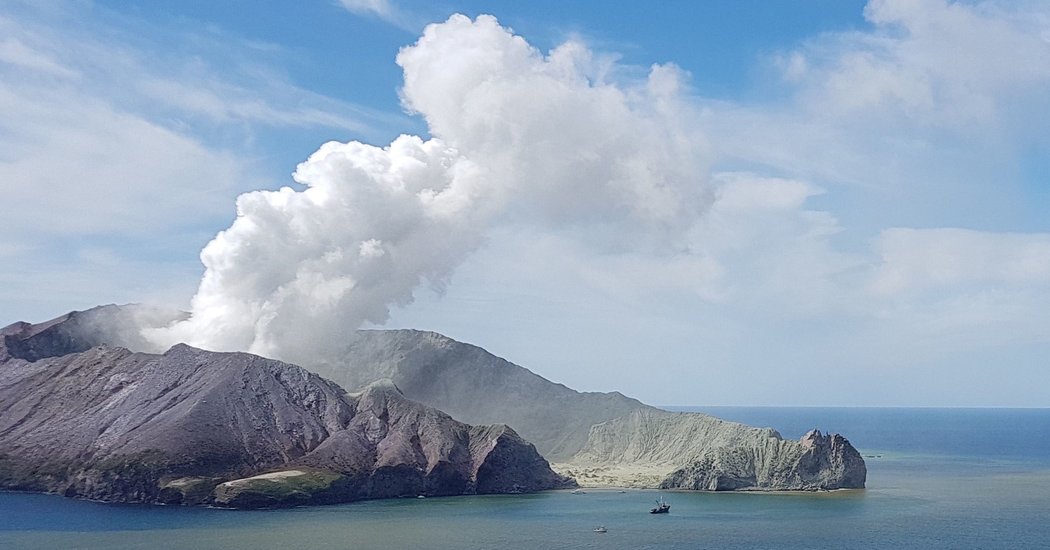 WHAKATANE, New Zealand — Above the noise of the boat engine, there was quiet, Geoff Hopkins remembered. There was no rumble, no roar to signal that the White Island volcano had awakened.

The crater he’d just circled with his 22-year-old daughter, Lilani, erupted as they sat in a catamaran several hundred meters from shore, watching with other passengers as the island disappeared under ash.

“A rolling rumbling mass of ash tumbled over the cliff face, in all directions, and it completely engulfed the island,” said Mr. Hopkins, a 50-year-old pastor. “It cut out the sun, it went dark. You couldn’t see that there was an island there. It was completely covered in ash.”

That Mr. Hopkins, his daughter and dozens of others were allowed to go near the island — let alone scale the crater at its center — when geologists had repeatedly warned of increased volcanic activity is now the subject of an investigation, with the death toll from the eruption Monday having risen to six. As of Tuesday afternoon, eight others were also believed to have died, with emergency workers still unable to reach the island to retrieve them.

And the question heard over and over in the long hours since, heard as the injured were carried to the docks, is: “Why?”

Why was anyone — from retirees to children — allowed to tour the crater of an active volcano, despite warnings about bursts of gas and steam in recent weeks? Why would tour operators and cruise lines tout an adventure ride, with prices starting at $260 per child, at such risk?

And why, as of Tuesday, were there no clear answers to who is ultimately accountable for ensuring visitors’ safety: the family that owns the remote island, or the government charged with enforcing health and safety regulations?

“There has to be more respect for nature. We can’t assume we can access anything we want,” said Jozua van Otterloo, a volcanologist at Monash University in Melbourne, Australia, who visited White Island — also known by its Maori name of Whakaari — in 2012. “This is something policymakers and the public need to consider. Even though this is such a great place, should we be allowing people to go in such large numbers?”

The volcano is the island’s main draw. The town of Whakatane calls itself the “Gateway to White Island,” and much of the local economy is driven by tourist visits. Already, locals are concerned about the effect the eruption will have on the community as questions of disclosure and negligence swirl.

White Island has long been promoted as New Zealand’s most active volcano, appearing in “Lord of the Rings” and other blockbusters, when it is in fact little more than its dangerous apex. Around 70 percent of the volcano sits under the water, and tourists walk into its crater and up to the lip of its crater lake, peering into its cavity to see its endlessly boiling core.

“You’re walking into this enclosed amphitheater, onto the floor of a very active volcano where there are steaming gas vents, where there are crater lakes filled with hot water close to boiling temperatures,” said Ray Cas, a volcanologist at Monash University who visited the crater twice, and on both visits believed it was a disaster waiting to happen.

“That tells you there’s a source of heat under the volcano that is constantly supplying hot gasses and heating up fluids under the molten rock or magma,” he added. “Basically you have this hot cooker system at constant high temperature and high pressure that could explode at any time.”

But New Zealand has long prided itself as a place where tourists could dance with danger. It was the first place in the world where you could bungee jump, and jet boating and blackwater rafting in caves are among its other attractions.

That allure of adventure — natural beauty with a dash of risk — framed the excursion for visitors to the island on Monday.

Aboard the Ovation of the Seas, the Royal Caribbean cruise ship where most of the victims traveled from, the online promotion for the tour promised “a scenic boat ride along the picturesque Bay of Plenty to White Island for an unforgettable guided tour of New Zealand’s most active volcano.”

“Get close to the drama,” it read. “Gas masks help you get near roaring steam vents, bubbling pits of mud, hot volcanic streams and the amazing lake of steaming acid. And the vivid hues of yellow and orange resulting from all sulfur on the island make for remarkable photos, so have your camera ready.”

Now, more than 27 of the 47 people who were on the volcano when it erupted are suffering burns on at least 30 percent of their bodies, officials said.

Mr. Hopkins, the pastor from the nearby town of Hamilton, watched with other passengers as the catamaran turned back to the island after the volcano erupted, and tour operators took rubber dinghies to the shore to seek out people who were still there.

The crew came back with 23 survivors. All of them, he said, were “horrifically burned. Skin hanging off people, off their faces, off their arms.”

Mr. Hopkins and his daughter, both trained first-aid responders, along with other passengers who were doctors, tended to the victims, who ranged in age from students to retirees. His focus: Lauren and Matt Urey, American newlyweds from Richmond, Va. He worked to keep them conscious for the 90-minute boat ride back to the mainland.

Ms. Urey’s mother is one of many who have asked, in anger, how such a tour could even exist.

The tours have been running for decades, under a deal between a handful of operators and the family that has passed down ownership of the land through several generations.

They fall under the jurisdiction of the 2016 Health and Safety at Work (Adventure Activities) Regulations, which require a safety audit for companies that “deliberately expose the participant to a serious risk to his or her health and safety that must be managed by the provider of the activity.”

White Island Tours, which was responsible for bringing most or all of the people to the island Monday, is a registered and approved tour provider. A little over a year ago, it won an award as one of the safest places in New Zealand to work.

But it’s not clear whether the company or government officials did enough to protect visitors to a location so remote that it can be hard to get a substantial number of people off the island and to safety quickly. Nor is it clear that the government will actively seek to hold anyone accountable.

The New Zealand police said Tuesday that a criminal investigation had been opened. But later in the day they corrected that statement, saying it was “too early to confirm” whether there would be one.

Employees at the office of White Island Tours declined to comment, as did New Zealand’s tourism minister and the area’s member of Parliament. Volcanologists with GeoNet, the agency that monitors geological activity in New Zealand, also declined to answer questions on Tuesday.

And local residents hadn’t seemed to think twice about the risk.

“I was going to buy one of those tours for my in-laws for Christmas,” said Karla Lyford, 24, who had been having lunch at the White Island Tours cafe when the eruption occurred at 2:10 p.m. local time. “White Island is so big here. It’s part of us. I was 14 when I went for a school trip, so it’s considered very safe. I’ve never — nor has anyone — considered it would be life-threatening.”

Now, she said, she has no plans to go back, and many are wondering if tighter restrictions will put White Island off limits. After a violent eruption in 2002 on the Sicilian island of Stromboli, another active volcano where tourists often gather, visitor access was banned for months. In Hawaii as well, volcano tours have been restricted in the aftermath of eruptions — and many of those volcanoes are not considered as active or as dangerous as White Island.

“It’s a fair question to ask whether anyone should be allowed in an active crater at any given time,” said Mr. van Otterloo, referring to White Island. “In hindsight, it was an accident waiting to happen.”