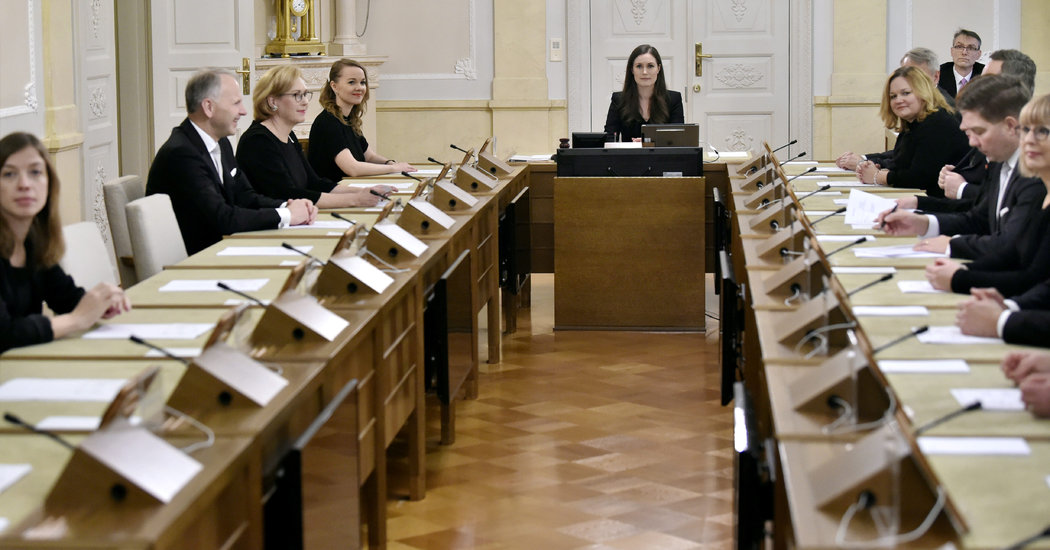 When Sanna Marin, 34, was sworn into office on Tuesday, she became the world’s youngest prime minister, a fact that drew international attention this week when her party elected her as Finland’s next leader.

But while the world is just becoming acquainted with the new, left-leaning leader, Ms. Marin has been a rising star in Finland’s Social Democratic Party since first entering Parliament in 2015. For many, she was a natural choice for her new role.

“She doesn’t come out of nowhere,” said Johanna Kantola, a professor of gender studies at Finland’s Tampere University. “And she is quite well-liked.”

Ms. Marin was voted in by her party after a turbulent week in which Prime Minister Antti Rinne resigned over criticism from within his coalition government of the handling of a postal workers’ strike. Mr. Rinne will continue as chief of the Social Democrats.

She takes up the leadership at a volatile, polarized time in Finnish politics. In elections in April, the Social Democrats only narrowly edged out the right-wing, populist Finns Party, winning the premiership for the first time in 16 years, but polls indicate that the Finns Party has gained in popularity since then.

In those elections, support for centrist parties fell, and no party won even 18 percent of the vote. When Mr. Rinne ran into troubles, none of his coalition partners wanted to risk bringing down the new coalition and rolling the dice on another election.

Speaking to reporters shortly after being sworn in, Ms. Marin waved off questions about the global interest in her new appointment, saying she was focused on governing.

“My thoughts have been in the proceedings and I have not followed the international and national media coverage,” she said. “We have promised change. Now we need action. I believe that trust will return through action.”

Ms. Marin gained popularity as head of the Tampere City Council from 2013 until 2017, when YouTube videos of her leading contentious and often heated meetings drew national attention.

“The style with which she managed the whole situation, she’s been quite admired for that,” Ms. Kantola said. “She is very centered on policies and issues, so she wants to talk about policies, not draw attention to herself.”

Elected to Parliament in 2015, Ms. Marin was re-elected in May 2019 and has served as the Minister of Transport and Communications. Ms. Kantola called her a clear choice for prime minister.

Ms. Marin is considered left-leaning, even within her party, and climate change, equality and social welfare are at the top of her agenda. On Tuesday, in a post on Twitter, she wrote about her commitment to build a better society in Finland.

“Finland will not be finished in four years, but it can get better,” Ms. Marin wrote in the post. “That’s what we’re working on. I want to build a society where every child can become anything and every person can live and grow in dignity.”

But the world of government did not always seem accessible to Ms. Marin. Born in 1985 in Helsinki, she moved often as a child and has spoken about how coming from a low-income family made politics seem out of reach.

When she first entered Parliament in 2015, she spoke to Me Naiset, a Finnish magazine, about the challenges.

“When I was in high school, I felt that the people in politics were quite different and came from different backgrounds than me,” she told the magazine.

Her parents separated when she was a child, and she was raised by her mother and her mother’s female partner, according to the article. She describes herself as being from a “rainbow family” and told the magazine she often felt invisible because she couldn’t talk openly about her family.

“That was something that couldn’t be discussed,” she said. “It is only now in the 21st century that the debate about rainbow families has begun to be fairly open.”

She now lives in Tampere with her husband and their young daughter, and said her family dynamic has shaped her political life.

“For me, human rights and equality of people have never been questions of opinion but the basis of my moral conception,” she said in a statement on her website. “I joined politics because I want to influence how society sees its citizens and their rights.”

Jenni Karimaki, a senior researcher at the Center for Parliamentary Studies at the University of Turku, said Ms. Marin’s rise could aid her party, which has struggled since taking the helm of government.

“This is the new start that the Social Democrats have been looking for, for a long time now,” Ms. Karimaki said. She predicted that Ms. Marin would most likely become the official head of the party after its convention this summer.

Ms. Kantola, the gender studies professor, noted a sharp contrast between the new government and the older, male-dominated center-right government in power from 2015 to 2019.

“It kind of took us back to 1980 in a way, and it’s not just this political representation side, that they were old white men, but it was also the kinds of politics that they did,” she said. “It was a very bad time for gender equality.”

Turnout this year was the highest in decades, almost 73 percent. Ms. Kantola said a backlash against the previous government drove a surge in voters electing younger, more liberal and often female lawmakers.

“It doesn’t take away the fact that obviously there are people in Finland that are not happy to have an all-female leadership of the government,” she said. “It’s a very strong contradiction.”