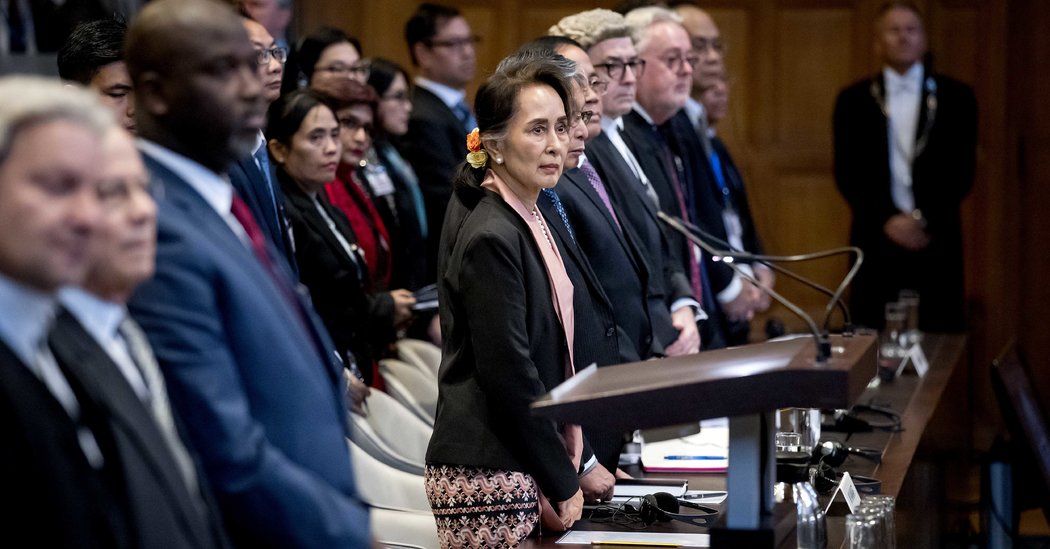 THE HAGUE — As still as a statue, Daw Aung San Suu Kyi had listened for nearly three hours as human rights lawyers and experts at the world’s highest court in The Hague described some of the horrors inflicted upon the Rohingya Muslims of Myanmar: veils ripped off girls before their rapes, babies thrown to their deaths, hundreds of villages turned into kindling.

The testimony on Tuesday was perhaps the first time that Ms. Aung San Suu Kyi, Myanmar’s de facto civilian leader, had heard such a full description of the atrocities that have landed her nation at the International Court of Justice to face accusations of genocide.

Now, Ms. Aung San Suu Kyi is expected to take the stand on Wednesday to answer those accusations and defend her country in a landmark lawsuit filed by the West African nation of Gambia on behalf of a group of Islamic countries. Gambia’s case relies on voluminous witness and human-rights expert testimony, along with reporting from a United Nations fact-finding mission on Myanmar.

What she will say — or not say — on Day 2 of the proceedings will be keenly watched. Since army-led pogroms against the Rohingya minority intensified in August 2017, Ms. Aung San Suu Kyi, a Nobel Peace Prize laureate who spent years locked up by Myanmar’s military dictatorship, has declined to criticize the generals with whom she now shares power.

On Wednesday, U Myo Nyunt, the spokesman for Ms. Aung San Suu Kyi’s political party, the National League for Democracy, described the testimony presented to the court the day before as “he said, she said.”

“We have already prepared to rebut these accusations,” Mr. Myo Nyunt said. “The fact-finding mission report is from respected persons from the international community but their report is not complete because of a lack of evidence.”

Members of Ms. Aung San Suu Kyi’s office have dismissed as fake news the crimes against the Rohingya that United Nations officials say were committed with genocidal intent. Only two isolated cases have been the subject of legal inquiries within Myanmar.

Diplomats who have tried to bring up the situation in Rakhine State, where the Rohingya are from, say Ms. Aung San Suu Kyi routinely cut them off. In some cases, she refused any further one-on-one meetings, two envoys said.

Bill Richardson, a former American ambassador to the United Nations who was asked by Ms. Aung San Suu Kyi to participate in one of several commissions on Rakhine that she assembled, quit in disgust last year after he said she “exploded” in anger at his criticism. “She might have hit me, she was so furious,” he recalled then.

Ms. Aung San Suu Kyi’s muted response to the Rohingya’s plight has earned the condemnation of some of her fellow Nobel Peace laureates, eight of who sent her an open letter this week accusing her of “actively denying that these atrocities even occurred” and urging that she “be held criminally accountable, along with her army commanders, for crimes committed.”

Ms Aung San Suu Kyi is not a defendant at the International Court of Justice, which does not try individuals and instead settles disputes between nations over questions of international law. But her unexpected decision last month to lead Myanmar’s defense, beginning with three days of hearings this week, have placed her in the spotlight.

The great hall of the International Court of Justice, a place of chandeliers and stained glass windows, was packed Tuesday with diplomats, activists, lawyers and reporters vying for a glimpse of Ms. Aung San Suu Kyi. She sat impassively while Justice Minister Abubacarr M. Tambadou of Gambia opened his country’s case by urging the court to tell Myanmar “to stop this genocide of its own people.”

“It is indeed sad for our generation that 75 years after humankind committed itself to the words ‘never again,’ another genocide is unfolding right before our eyes,” he said. “Yet we do nothing to stop it.”

Outside the turreted palace that is home to the court, demonstrators held up Ms. Aung San Suu Kyi’s portrait with the words “shame on you” and “agent of the military.”

Paul Reichler, an American who is the lead lawyer for Gambia’s legal team, addressed the question of whether Ms. Aung San Suu Kyi bore personal responsibility for the deaths of thousands of Rohingya. Her supporters say she is constrained by the military’s continuing grip on some of the most important levers of power in Myanmar.

But Mr. Reichler showed the court a picture of large billboards that have appeared in Myanmar in recent days, showing her superimposed in front of three smiling generals with the caption: “We stand with you.”

“This shows, in fact it can only have been intended to show, that they are all in it together, and that Myanmar has no intention of holding its emboldened military leadership accountable,” Mr. Reichler said.

Mr. Myo Nyunt, the National League for Democracy spokesman, said that the billboards did not mean Ms. Aung San Suu Kyi and the military were united.

“It just means they are in the same cabinet,” he said. “This case is very delicate and we need to handle the problem gently.”

Ms. Aung San Suu Kyi’s party is facing elections next year, which many believe was one motivation for her to personally lobby the international court.

“Unfortunately she has totally taken sides, and she is now whipping up nationalism simply to become more popular,” said U Maung Tun Khin, a Rohingya who traveled to The Hague from London to witness the hearings.

Ma Thinzar Shunlei Yi, a youth activist in Myanmar, said the International Court of Justice case had allowed the National League for Democracy to rally support at time when ethnic strife and a struggling economy have dented support for the ruling party.

“We can see that the divided political forces inside Myanmar have united to face a lawsuit from a foreign country that is seen as a common enemy,” Ms. Thinzar Shunlei Yi said.

People in Myanmar, she added, were not willing to “trade the reputation of their leader for the sake of minorities, especially the Rohingya.”

Rohingya Muslims have been persecuted for decades in Buddhist-majority Myanmar, gradually losing rights to education, health care and even citizenship. Half a million Rohingya still live in Rakhine, but they have been herded into internment camps or prevented from leaving their villages, even to farm or collect firewood.

About a million more have fled to neighboring Bangladesh, where they are crowded into the world’s largest refugee camp.

The three days of hearings this week are for Gambia to ask the court to issue a temporary injunction ordering Myanmar to protect those Rohingya who remain in the country. A United Nations rapporteur recently warned that “crimes with genocidal intent” are continuing and intensifying in Rakhine.

Gambia, a small Muslim-majority country, accuses Myanmar of violating the Genocide Convention, which both Gambia and Myanmar have signed. Another case is working its way through another United Nations court but that effort is hampered by the fact that Myanmar is not party to that court’s convention.

Abdul Malik Mujahid, the American chair of a rights coalition called Burma Task Force U.S.A., traveled to The Hague from Chicago. (Myanmar was formerly known as Burma.) Mr. Mujahid, who is also an imam, said he believed that Ms. Aung San Suu Kyi’s presence at the court would backfire by giving renewed exposure to the continuing plight of the Rohingya.

“I’m sure she is doing a disservice to her government and her cause by showing up,” he said. “The world will pay attention to her, and also to the facts in a legal case that might otherwise get little attention. She is providing infamous star power to the case.”