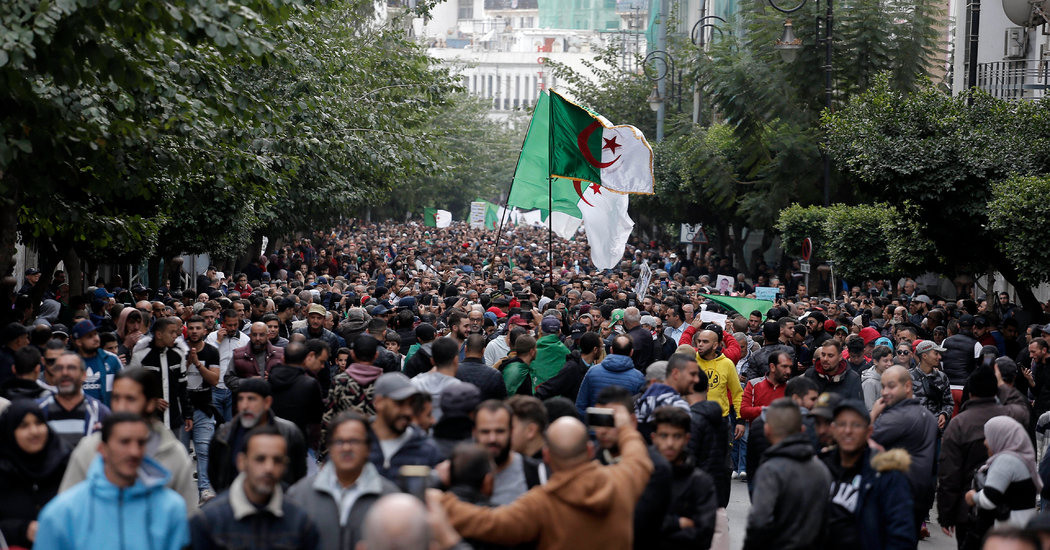 Sizable street protests in Algiers and other cities greeted the announcement on Friday that a former Algerian prime minister, Abdelmadjid Tebboune, 74, had been elected the country’s new president in a much-contested vote the day before.

Mr. Tebboune will succeed Abdelaziz Bouteflika, who ruled Algeria for 20 years before being chased out of power by popular protests in April.

The protesters, who largely boycotted the election, said it meant little. The country’s real rulers were still the military, they said, and in particular the army chief of staff, Gen. Ahmed Gaid Salah. Mr. Tebboune was seen as the military establishment’s preferred candidate.

Demonstrators coursed through the streets of Algiers on Friday chanting, “We didn’t vote,” over and over.

The official turnout in Thursday’s vote was a record low of around 40 percent. The actual turnout was likely far less as the vote was extremely low in the country’s major cities, including Algiers.

One Paris-based Algerian analyst, Moussaab Hammoudi of the School for Advanced Studies in the Social Sciences, citing a contact in the upper ranks of the country’s bureaucracy, said the turnout was actually a fraction of the official number.

“It’s clear that the officially announced turnout is completely false,” he said. “We saw that nobody came out to vote. We’re used to these completely falsified elections. That’s why we didn’t put forward a candidate.”

Protesters rallied in Algiers against the election even as it was being held, staving off aggressive police intervention to do so.

Mr. Tebboune had faithfully served Mr. Bouteflika for years: as a local official, as a powerful minister, and then briefly in 2017 as prime minister, before being thrown out of office by Mr. Bouteflika’s brother Said, who by then had become the country’s real ruler because of his older sibling’s illness.

But analysts said that one reason Mr. Tebboune was the preferred candidate of the military establishment, and of General Gaid Salah, was because he appeared to have split with the Bouteflika clan, with which the general was in bitter conflict by the end of his tenure.

The protesters had long since rejected Mr. Tebboune, as well as the other four candidates in the race, as part of the “system,” their epithet for the ruling elite that has governed the country since independence from France in 1962. The generals who historians and analysts say are the real power-brokers in the country had insisted on holding Thursday’s vote in an effort to move the country past the protest movement.

“These were elections ordered by the military command,” Mr. Hammoudi said. “They needed to have these elections, to give themselves a civilian facade. But what Gaid Salah thought would be a solution, actually only deepens the problem for them.”

Mr. Khelil, the rights activist, said that the election “contradicts the will of the people” and was intended to give the existing system a “civil facade.”

“It brings nothing concrete to what the people’s movement wants,” he said, speaking from the middle of the big demonstration in Algiers on Friday. “Maybe it resolves an internal problem in ‘the system,’ but it doesn’t resolve the demands of the Algerian people.”

On social media, protesters said the protest movement would continue, as it did Friday. Mr. Khelil said either the new president would work to meet the demands of the protesters, beginning with the release of dozens who have been imprisoned in recent months — he thought this unlikely — or the government would double down on repressing the movement, “which would be a fundamental error.”

Abdelkrim Boudra, one of Friday’s marchers and member of an opposition study group, said “the political crisis is only going to get worse.”

“They’ve reached the logical end, and they will soon realize that they haven’t resolved anything,” he said, speaking of the authorities. “Yesterday we saw the police unleashed. I hope it stops right there.”

Mr. Hammoudi said: “People have only one obsession: to get rid of the regime. This masquerade won’t pacify the movement.”