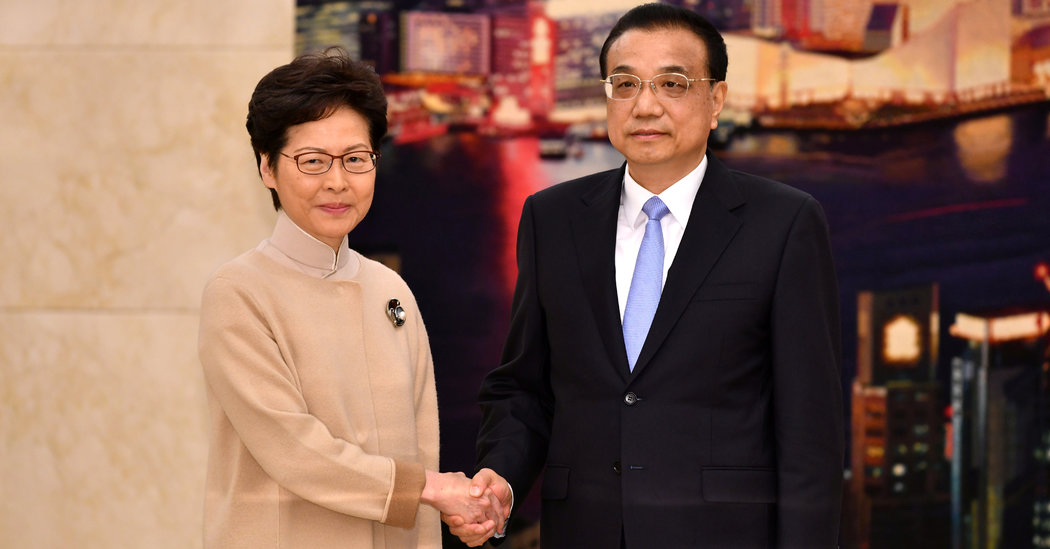 BEIJING — China’s second-highest official strongly backed Chief Executive Carrie Lam of Hong Kong on Monday despite the monthslong protests that have rocked the city and the recent landslide defeat in local elections of political parties aligned with her.

Mrs. Lam’s visit to Beijing over the weekend and on Monday was an annual year-end event for Hong Kong’s leaders, at which their performance is assessed by China’s leaders. But her visit is being closely watched for signs of her fate as Hong Kong’s leader after six months of protests punctuated by frequent street violence.

The protests began in June over an unpopular extradition bill Mrs. Lam pushed to pass that would have allowed Hong Kong residents to be extradited to mainland China to face trial in a Communist Party-controlled judicial system. Mrs. Lam has quickly become a personal target for the city’s protesters, who see her as a symbol of a leadership that is overly beholden to its patrons in Beijing and not accountable to the city’s 7 million people.

The endorsement by China’s No. 2 official, Premier Li Keqiang, is the latest confirmation that Beijing stands behind Mrs. Lam — at least publicly.

“You have been leading the government in safeguarding social stability with the utmost effort,” Mr. Li said to Mrs. Lam in a televised excerpt released by the Hong Kong government. He praised her for rolling out a series of measures to help businesses and stabilize employment.

“It can be said that you rose to the challenges,” he said. “The central government fully affirms the efforts that you and the government have made.”

Mrs. Lam herself has said that she is willing to do whatever is necessary to bring peace to the city although she has denied rumors that she actually submitted her resignation over the summer. Senior Hong Kong officials and Beijing’s advisers have said that even if she wanted to resign, China’s leaders would not allow her to do so, seeing that as a sign of weakness.

Xi Jinping, China’s top leader, praised Mrs. Lam’s leadership of Hong Kong when she visited Shanghai in early November. But that visit was immediately followed by a two-week violent showdown between police and activists at Hong Kong Polytechnic University, and then the almost complete collapse of pro-Beijing parties in local elections.

Democracy advocates swept 87 percent of the seats on neighborhood councils in those elections and took control of 17 of the territory’s 18 councils. They previously had about a quarter of the seats and controlled none of the councils.

The vote was hailed as a sign of enduring support for the protest movement despite increasingly violent clashes with the police. The contentious bill was formally withdrawn in September, but protesters say they will not stop until their other demands are met, including free and open elections of the territory’s leadership and legislature and an independent investigation into allegations of police brutality during the unrest.

The election results appeared to come as a surprise to Beijing, which, together with its allies in the city, had portrayed the vote as a way for Hong Kong’s silent majority to “end social chaos and violence” by signaling their unhappiness with the protest movement. State media in Beijing ultimately blamed the outcome of the vote on interference from hostile Western forces bent on stirring up unrest in the city.