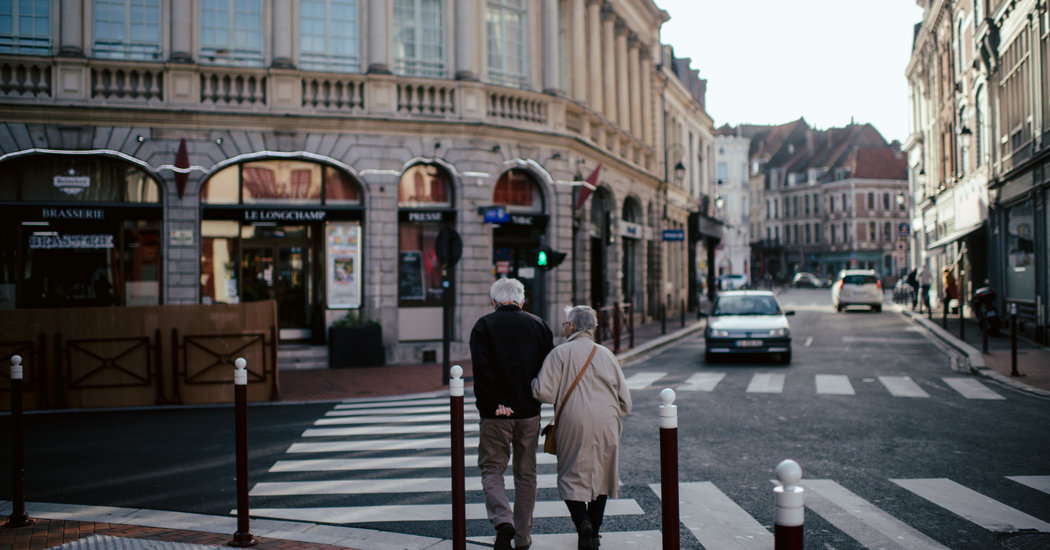 DOUAI, France — Her mother’s death had been expected. Terminally ill with breast cancer, she lay in a medical bed in her living room, visited daily by a nurse.

But when Sandra Lambryczak’s 80-year-old mother died earlier this year, in the predawn hours of a Saturday morning, the daughter suddenly discovered a growing problem in France’s medical system: By law, the body couldn’t be moved until the death was certified by a medical doctor, but a shortage of personnel can sometimes force families to keep their deceased loved ones at home for hours or even days.

“Madame, there’s nobody on weekends, there’s no doctor,’’ she was told when she called the emergency services. “I pleaded, ‘This can’t be true. We can’t leave a body until Monday morning.’’’

She turned off the heaters and flung open the windows. Police officers came, followed by the mayor of Monchecourt, the local municipality, solicitous but powerless in finding a doctor. Only half a day later, after her mother’s nurse was able to locate her personal physician, was the body allowed to be taken to the funeral home.

Ms. Lambryczak said she still suffers sleepless nights because of what happened to her mother, Josiane Gaudig-Delos, adding, “Honestly, it was a nightmare.’’

Such agonizing waits have been occurring with increasing frequency around Douai, a city of 40,000 in northern France, and in other areas with a scarcity of physicians. A local newspaper summed up the situation in a headline: “It’s not good to die at home on a weekend.’’

Mayors, councilors, police officers, firefighters and other officials find themselves scrambling to help families locate a willing doctor capable of coming to certify a death, though neither the government nor medical associations keep data that would indicate precisely how widespread these delays have become.

Exasperated, one town issued a bylaw forbidding its residents to die at home. The mayor of Douai took a more conventional approach, recently writing to the health minister that he had faced four such cases in the past year and that desperate residents regularly called him for help in finding a doctor to certify a relative’s death.

“This is a visible problem that is a symptom of something much more structural,’’ the mayor, Frédéric Chéreau, said in an interview.

Nurses, coroners, pathologists and other officials can certify deaths in countries like the United States. But in France, where a quarter of the population dies at home, the role is reserved for medical doctors, who must visit the deceased’s home, verify that the death was natural and note its cause.

It is system that functioned well when France had a surfeit of general practitioners, many of whom made house calls. Today, while an acute shortage of doctors in some areas has created what the French called “medical deserts,’’ the requirements for obtaining death certificates have essentially remained the same.

“There’s an enormous gap,’’ said Dr. Roland Crestel, a longtime general practitioner in Douai who helped establish an off-hours facility with on-call doctors in 2015. “It’s like the highway code was made for horse-drawn buggies and now we have cars that go 10 times faster. You’re going to crash.’’

About 8 percent of the country lives in a medical desert, according to the government, even as France’s overall number of doctors has kept rising and physicians cluster in metropolitan areas. Douai and the rest of northern France have been hit hard by the collapse in recent decades of their economic base, factories and mining.

The situation in Douai — a city that still celebrates its rich medieval heritage and rode France’s postwar economic boom — is becoming “worrisome,’’ Mayor Chéreau said. Though Douai is not classified as a medical desert, its general practitioners are aging, and replacements were insufficient, he said.

The imbalance between the deserts and the overall increase in doctors has reinforced the sense of a widening gap between a thriving France and a peripheral, withering France — divisions that fueled the Yellow Vest protests and the rise of the far-right National Rally party, and cause daily hand-wringing in the news media.

“We’ve never had so many doctors in France, and yet we have medical deserts where families have to keep a cadaver at home, and where they’re abandoned in both life and death,’’ said Christophe Dietrich, the mayor of Laigneville, a 4,500-resident town where the last two doctors retired in 2017.

That year, Laigneville passed a bylaw prohibiting residents from dying at home after two families endured long waits in the summer heat to have the deaths of relatives certified, Mr. Dietrich said.

The move, intended to pressure national health authorities to find a physician in his region, had mixed results, he said: No doctor has arrived, but a telemedicine center was established.

In France, where half of all family doctors are now over 55, officials are bracing for a big wave of retirements over the next decade.

The French government is aiming to increase the number of doctors by eliminating a cap on the number of medical students next year and sending young doctors to underserved areas.

But the effect of the new cohorts is not expected to be felt for a decade, and young doctors are continuing to choose specialties over general practice.

It is difficult to attract doctors to medical deserts — areas that also lack other services, said Dr. Marc Vogel, the vice president of the French Medical Council in Nord, the department that includes Douai.

“Medical deserts are sometimes simply deserts,’’ he said. “Once there’s no longer a post office, a bank, or a school, it’s hard to still have a doctor.’’

Overburdened, the remaining doctors in underserved areas do not feel the obligation to go out of their way to certify the death of someone who was not a patient of theirs, some doctors said. The product of a time when the bond between doctor and patient was stronger, the act of certifying a death was considered a physician’s last duty — a free one that was not reimbursed by the national health insurance system.

Since 2017, France has paid a flat rate of 100 euros, or $110, to doctors who certify a death at night, on weekends, holidays or in underserved regions. But the policy’s effects appear limited, some government and health officials said.

Doctors have resisted pressure from some politicians to delegate the authority to certify deaths to other health care officials. They argue that it is a serious medical procedure and that a mistake in noting the cause of death could have legal consequences.

“There are doctors, if they don’t know the patient well, say to themselves that they don’t want trouble later on,’’ said Dr. Olivier Bouchy, the vice president of the French Medical Council in the department of Meuse. “Signing a death certificate is not harmless.’’

Like with many things in France, tradition is perhaps also an obstacle to changing the doctor’s role in certifying deaths. The death certificate process, Dr. Bouchy said, harked back to an earlier time.

“Who declared a death in the royal court? It was the doctor of the king,’’ Dr. Bouchy said. “We remain rooted in very ancient traditions.’’

In France, the state’s role in regulating people’s daily lives — including in matters of health — remains strong. So the lack of a doctor, especially at the emotionally vulnerable moment when a family member dies, can feel like a deep betrayal.

“We felt abandoned by the state,’’ said Frédéric Deleplanque, who had to wait more than two days for a doctor to certify the death of his father-in-law, Jean-Luc Bajeux, a retired autoworker. “We were nothing.’’

On a Saturday morning earlier this year, Mr. Deleplanque discovered his father-in-law, who had been ill, in his apartment in Douai, slumped in his wheelchair on his way to the toilet. He turned off the heat and the television before reaching an emergency operator on the phone.

“He told me to touch my father-in-law to make sure he was dead,’’ Mr. Deleplanque recalled. “I told him he was deceased, but he insisted. So, there you go, I touched him, he’s cold.’’

“And all that for nothing,’’ he said, “because no doctor came.’’

Police officers and firefighters came to the apartment, but were unable to help him find a doctor.

On Monday morning — by then his father-in-law’s body had started to suppurate — he called the police again: “I told them, it’s simple. I’m taking my father-in-law and putting him in the middle of the street.’’

The delays have also caused complications for funeral homes.

Michel Tomczyk, the owner of the Tomczyk-Delebury funeralhome in Douai, said he dealt with a case in which a young man who died of a heart attack was found face down on the floor of his apartment on a Saturday. His body remained in that position until a doctor was found Monday, forcing the family to hold a closed-coffin funeral.