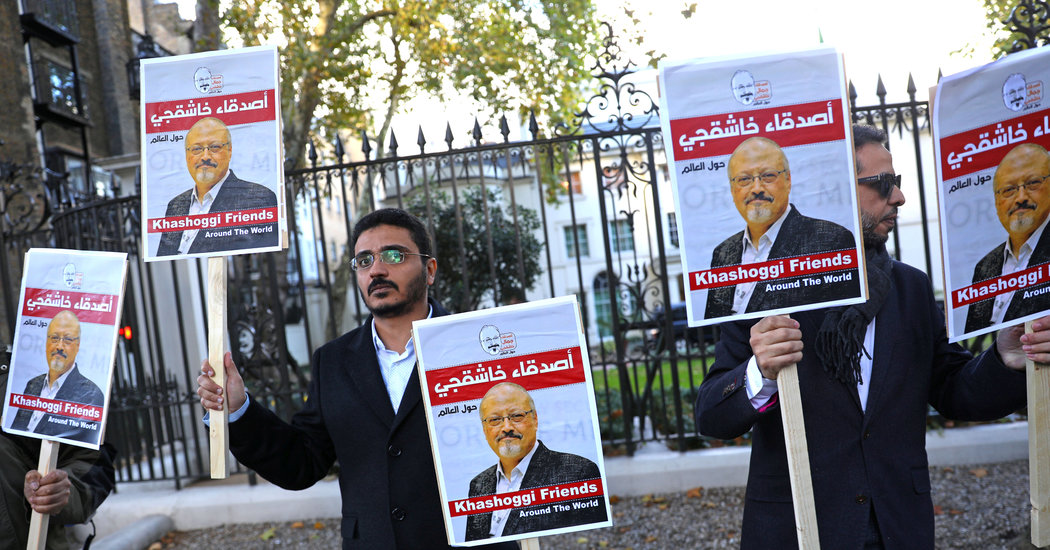 BEIRUT, Lebanon — A court in Saudi Arabia sentenced five men to death and three to prison terms over the killing of the Saudi dissident writer Jamal Khashoggi in Istanbul last year, the kingdom’s public prosecutor’s office said on Monday.

Mr. Khashoggi, who lived in Virginia, entered the Saudi consulate in Istanbul on Oct. 2, 2018, to obtain paperwork he needed to marry his Turkish fiancée. Inside, he was confronted by Saudi agents, who killed him and dismembered his body. His remains have yet to be found.

Officials in Washington and other capitals had called on Saudi Arabia to investigate the case and ensure justice. But it was unclear whether the verdict announced on Monday would appease critics who argue that the killing of Mr. Khashoggi, 59, was part of a wider campaign to silence critical voices at home and abroad.

The trial was held in the Saudi capital, Riyadh, and was shrouded in secrecy. The kingdom never announced the suspects’ names, and foreign diplomats who attended sessions of the trial were sworn to secrecy.

A statement from the public prosecutor’s office said five men had been sentenced to death for their direct involvement in Mr. Khashoggi’s killing. Three others were given a total of 24 years in prison for covering up the crime and violating other laws.

The kingdom did not provide the names of those sentenced, but it said that Saud al-Qahtani, a top aide to Prince Mohammed whom the United States imposed sanctions on over the killing, had not been tried because of a lack of evidence against him.

Although no evidence has been made public that directly implicates Prince Mohammed in the killing, an assessment by the Central Intelligence Agency found that he had probably ordered the operation, which included two private jets and more than 15 government agents.

Prince Mohammed has said that he played no role in the killing but that he bore some responsibility for it because it happened on his watch.

Death sentences in Saudi Arabia are usually carried out by beheading in public squares. All suspects can appeal the verdicts.