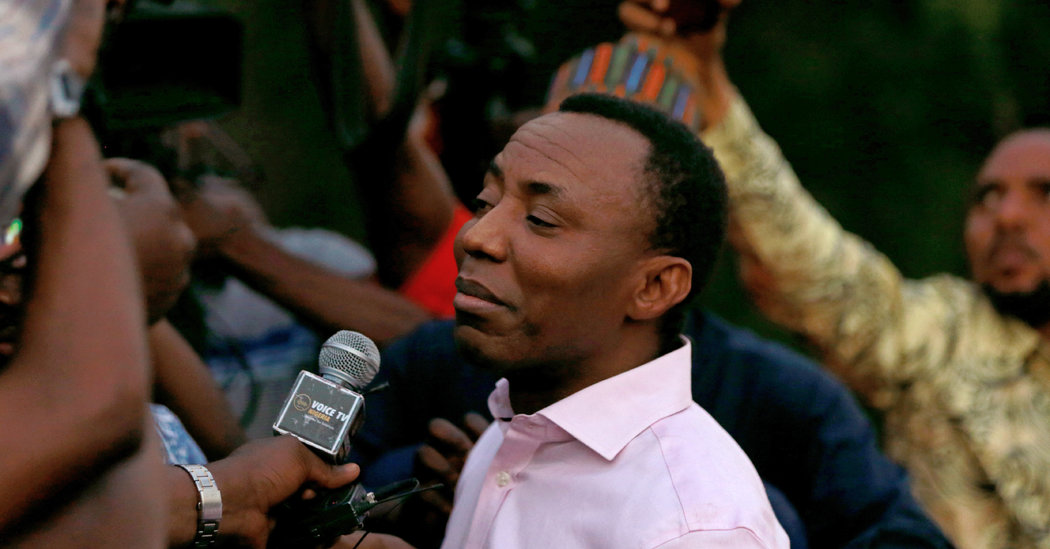 A Nigerian publisher and former presidential candidate was released on bail on Tuesday after a monthslong imprisonment that heightened fears of deteriorating protections for free expression in Africa’s most populous nation.

Omoyele Sowore, the founder of the website Sahara Reporters, had been held for most of the past five months by Nigeria’s equivalent of the Secret Service, the Department for State Services, or D.S.S. Two earlier court orders to release Mr. Sowore on bail had been ignored by the authorities.

At a court appearance on Dec. 6, Mr. Sowore, then temporarily free, was wrestled to the floor of a courtroom and taken into custody by the D.S.S., an incident that stirred outrage when it was circulated on social media.

Mr. Sowore still faces trial on charges of treason, money laundering and “cyberstalking” — the last for allegedly insulting the president, Muhammadu Buhari, on television. His bail conditions stipulate that he may not leave the Nigerian capital, Abuja, or speak to the press, but that didn’t stop him from giving a short statement after his release.

Six members of Congress in the United States had appealed to the Nigerian attorney general on behalf of Mr. Sowore, who lives in New Jersey with his wife and children but whose work focuses on exposing corruption and government malfeasance in Nigeria.

His wife, Opeyemi Sowore, said that she was grateful for his release, but that her family was still praying for the “holiday miracle” of his return home to Haworth, N.J., where the family’s neighbors have campaigned for the Nigerian authorities to free him.

“My No. 1 concern is for his safety,” Ms. Sowore said. “We remain resolute on Yele being cleared of all baseless charges,” she added, using the short form of Omoyele

“I expect the government of Nigeria to ensure his continued safety and security now that he is out of custody,” Senator Menendez said.

Mr. Gottheimer added: “We will not stop working until Yele comes home.”

Mr. Sowore had once been seen as supportive of Mr. Buhari, but he came to be one of the administration’s fiercest critics. In February, Mr. Buhari was elected to a second term in an election in which Mr. Sowore ran unsuccessfully against him.

Mr. Sowore was arrested on Aug. 3, on one of his frequent trips to his native country, when he was about to lead a protest against the government with the social media tagline #RevolutionNow.

His critics accuse him of trying to overthrow the Nigerian government, rather than, as his supporters claim, merely pointing out government corruption and wrongdoing.