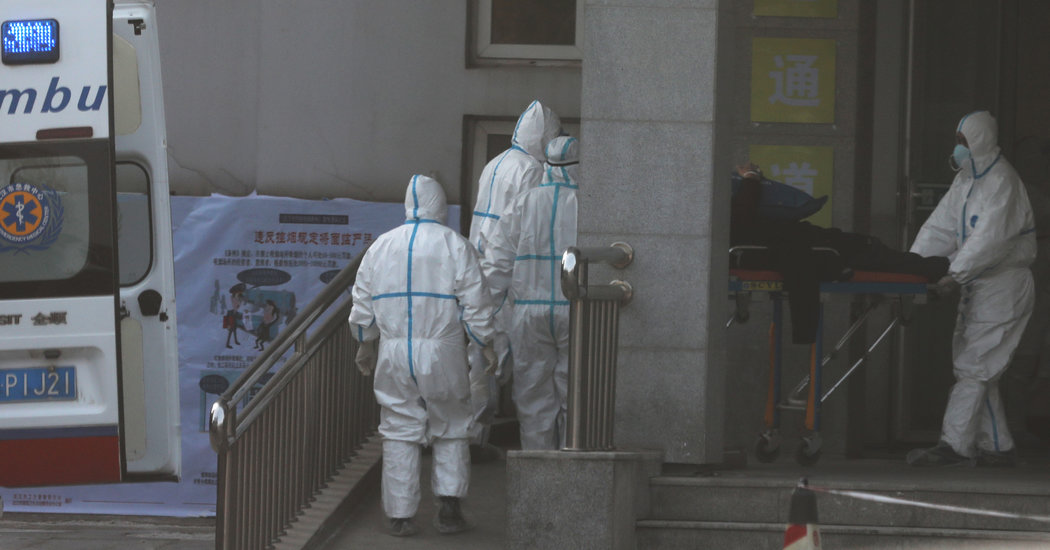 WUHAN, China — Facing growing pressure to contain a deadly viral outbreak that has spread halfway around the world, China’s ruling Communist Party raced on Tuesday to confront the disease, slapping restrictions on the city where it started and warning that anyone who hides infections will be “forever nailed to history’s pillar of shame.”

The response by the Chinese leadership, which has come under intensifying criticism that it has been slow to acknowledge the severity of the outbreak, came as fatalities from the disease doubled to at least six. Infections surged overnight from 200 to 300, and global financial markets were rattled by the possibility of a pandemic emanating from the world’s most populous country during the Lunar New Year — Asia’s heaviest travel season.

Already, cases of the pneumonialike virus have also been confirmed in the United States, Taiwan, Japan, Thailand and South Korea. Airports around the world, including in the United States and Australia, are screening passengers from Wuhan. North Korea temporarily closed its borders to foreign tours, the vast majority of them from China. The World Health Organization has called a meeting on Wednesday over whether to declare the outbreak an international health emergency.

In Wuhan, the central Chinese city of 11 million where the outbreak began, the authorities have banned group tours out of the city and ordered vehicles checked for live animals. Nervous residents are buying up face masks and flooding hospitals to report fevers and coughs. Some schools are canceling classes and even Buddhist temples are turning away the faithful.

At home and abroad, the Chinese authorities are facing demands for greater transparency in their disclosures about the disease, as new cases emerged this week in other major Chinese cities and officials confirmed that the virus spreads from human-to-human contact.

The outbreak is testing China’s leader, Xi Jinping, and the party’s penchant for secrecy in moments of crisis, 17 years after Beijing drew widespread criticism for withholding information and acting slowly in handling the outbreak of SARS, which killed more than 800 people and infected more than 8,000 worldwide.

Mr. Xi, who has sought to expand China’s global influence, seems eager to shake the shadow of SARS and show that Beijing can handle a public health crisis like a responsible world power. A top party committee on Tuesday said in stark terms that it would not tolerate any efforts to hide infections.

“Whoever deliberately delays or conceals reporting for the sake of their own interests will be forever nailed to history’s pillar of shame,” the committee said in a post on a popular social media site.

On Monday, China’s health commission said it would respond with measures intended to manage outbreaks of the most virulent diseases, including mandatory reporting of cases. It classified the virus as a class B infectious disease — a category that includes diseases such as SARS.

But the government, wary of letting fear run rampant, is also working meticulously to control the narrative about the virus by censoring news articles and social media posts. The police in Wuhan investigated eight citizens this month for spreading what it described as rumors on the internet.

Now, even as the government works to isolate sick patients amid travel by millions of people making visits for the Lunar New Year holiday — and infections are reported in Beijing, Shanghai, Chongqing and other major cities — there is concern that the party’s long-held reluctance to divulge damaging news could hinder the effort to contain the virus.

For weeks, the government had mostly treated the outbreak as a problem isolated to Wuhan. It was only after the Hong Kong news media reported that cases of the coronavirus had been detected elsewhere that the government began acknowledging, early Monday, that the disease had spread to other cities.

Many wondered why the central government waited until Monday to allow a top health expert to speak publicly about the outbreak. The expert not only corroborated what the Hong Kong news media had already reported but confirmed vital new information: that the virus spreads between people and that one patient had infected more than a dozen medical workers.

“The response is not fast enough, it’s not strong enough,” said Shen Zhengjiang, 57, a teacher, as he looked for masks at a pharmacy in Wuhan on Tuesday. “The local officials are paying attention to this now only because Xi Jinping spoke up.”

The outbreak presents Mr. Xi, who rose to power in 2012, with one of the most serious public health crises of his tenure. It will be a significant test of his leadership at a time when China is seeking to strengthen trust in the party and to project confidence in Mr. Xi’s authoritarian approach.

Any missteps could undermine the party’s credibility in the eyes of the public, experts said.

“This is the sort of thing that could absolutely gnaw at the confidence and legitimacy of the whole regime,” said Kerry Brown, director of the Lau China Institute at King’s College London.

Experts said the challenge for Mr. Xi would be daunting, as the world looks to China to stop the virus before it spreads on a global scale.

Yanzhong Huang, director of the Center for Global Health Studies at Seton Hall University, said that it appeared Mr. Xi was seeking to show that the virus is under control and would not cause social unrest.

But he said the government’s failure to initially detail the spread of the virus to mainland cities and to disclose that medical workers had been infected was worrying.

“So far this pattern of a lack of transparency and inaction has unfortunately not changed,” said Professor Huang, an expert on the SARS epidemic. “The politics continue to constrain the government to respond effectively.”

The Chinese government, which has been praised by the W.H.O. for its efforts so far, has said it took time to analyze the coronavirus, which experts believe appears to be mostly transmitted to humans by animals.

The delay in reporting the spread of the disease was attributed to technological but also bureaucratic challenges. Some hospitals lacked testing kits, according to remarks on Monday by Dr. Zhong Nanshan, a prominent scientist who is leading a government-appointed panel of experts assisting in controlling the outbreak. The process was also slowed down, he said, because local hospitals were required to submit cases to the central health commission in Beijing for review before going public.

For weeks, the authorities in Wuhan seemed to play down the threat posed by the virus. The health department said it had only been found in people who visited a local market that had sold live fish, birds and other animals, and that workers had disinfected and shut down the site.

Cases have begun to appear overseas, first involving travelers from Thailand and Japan who had visited Wuhan but had not all visited the market. On Tuesday, the first confirmed case in the United States was announced: a man from Washington State who experienced symptoms after returning from the region around Wuhan.

Questions have emerged on Chinese social media about whether the Chinese government has been forthcoming. Many articles and posts, including some using the hashtag #WuhanSARS, were censored.

After his stepmother died of viral pneumonia last week, Kyle Hui, 32, an architect from Shanghai, turned to Weibo, a Twitterlike site, to report her case. Mr. Hui’s stepmother was never formally tested for the virus, and he was concerned that the Wuhan government was underreporting cases of the illness. But his post soon disappeared from the internet.

“People accuse me of spreading rumors, but I’m just trying to tell my stepmother’s story,” he said in an interview at a cafe in Wuhan.

Even as the authorities came under attack, they doubled down on their approach. At one point, in an apparent effort to dispel rumors that the virus had spread to other mainland cities, the Chinese Center for Disease Control and Prevention issued a statement saying that the virus did not resemble SARS.

The authorities in Wuhan will begin barring group tours from traveling outside of the city and will carry out checks of vehicles to search for live animals, state media reported on Monday. The city has also installed infrared thermometers at airports, and bus and train stations.

It was not until Monday that the government changed course, after news outlets in Hong Kong reported over the weekend that there were several potential cases of the illness in Shanghai and Shenzhen, a southern city. The central government dispatched Dr. Zhong, a renowned expert with a reputation for bluntness, to Wuhan.

Dr. Zhong, in candid television appearances, revealed for the first time that the virus could spread from person to person — noting, for example, that one patient had been able to infect 14 medical workers. He warned that the virus could be present in particles of saliva and urged people to avoid unnecessary travel to Wuhan.

The spread of the virus has upended the Lunar New Year holiday this week, when millions of Chinese return to their hometowns to celebrate. The authorities have encouraged people showing symptoms of the virus, including high fever, difficulty breathing and lung lesions, to see a doctor.

In Wuhan, some residents have canceled plans to go out to lavish meals for the new year and say they are avoiding enclosed spaces like movie theaters. Some firms have instructed employees to stay home. Many people now wear masks throughout the day, as they make dinner, play cards or chat with friends.

Some residents are packing up and leaving Wuhan, vowing to stay away until the virus is contained.

At the Wuhan airport on Tuesday, Luo Jie, 62, a retiree, rushed to catch a flight to Beijing that she had booked that morning. She said she wanted to “escape” because the outbreak reminded her of the SARS crisis.

“I hope the government will report the epidemic honestly,” she said. “That’s how to set people’s minds at ease.”