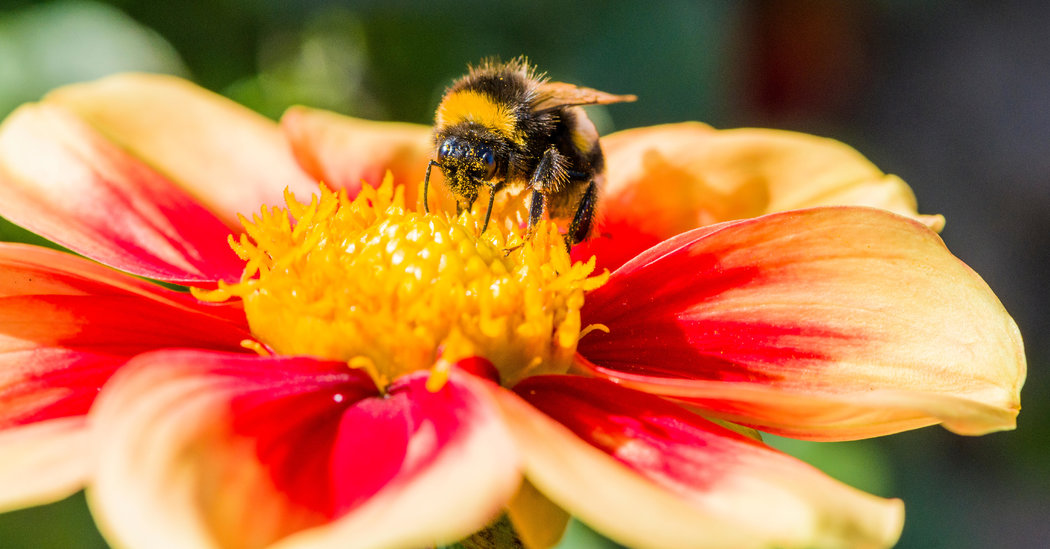 The bumblebee is a discerning nectar shopper. When choosing which flowers to gather the sticky substance from, it might consider a plant’s distance, the shape of the petals and how sugar-rich the nectar is.

But according to a study published Wednesday in the Journal of the Royal Society Interface, there’s another variable the bees may be considering on a nectar run: How fast can they barf it back up?

Nectar is available in a number of concentrations, even within the same plant species. A recent study of field beans — conducted by the lab that studied bee vomit — found that some flowers produced a light ambrosia of 15 percent sugar, while others went up to a syrupy 57 percent. Although sweeter nectar provides more energy, it is also more viscous, which makes it more time- and energy-consuming to deal with. The thicker the nectar, the longer it takes for a bumblebee to lap up, which cuts into the energy gains the extra sugar provides.

In recent years, a number of researchers have timed bees drinking different concentrations of nectar, and used this information to figure out what sugar levels might be “most appealing to bees.” This knowledge can be used to help entice them to the right crop plants, enabling efficient pollination, said Jonathan Pattrick, a postdoctoral researcher in the University of Oxford’s Department of Zoology and the lead author of the new paper.

But because of the structure of bumblebee society, vomiting is also an important part of the equation. Only bees on foraging duty actually go out and drink nectar. When they return to the nest, they regurgitate their haul into wax receptacles called honey pots, so that the ones that stayed home can partake.

The spewing step has gone mostly ignored by researchers, said Dr. Pattrick. To fill in this missing piece, his team set up a nest in the lab and filled it with Bombus terrestris, one of Europe’s most common bumblebees and a popular pollinator in greenhouses.

The team gave the bees access to sugar solutions at three strengths: 35 percent, 50 percent and 65 percent, which is “like maple syrup,” said Hamish Symington, a graduate student at the University of Cambridge and a co-author. Mr. Symington spent hours watching individual bees forage, timing how long it took for the different concentrations to go down the hatch and then come back up again.

When they crunched the numbers, the researchers found that high concentrations slowed vomiting considerably — more than they slowed down drinking. While offloading a 35 percent solution only took four or five seconds, the process of retching up a 65 percent solution could go on for nearly half a minute.

Although the researchers didn’t measure effort, Mr. Symington said that bringing up the thicker stuff also seemed more challenging for the bees. When vomiting the more dilute solutions, a bee would “just put her head in and go ‘HRGT,’ and that was it,” he said, imagining the sound the bee might make.

But when trying to expel the highest concentrations, “She’d sit there going ‘HYYYRRGGG HERRRG COME ON,’” he said. “It looked like she was making a real go of it.”

The data they collected showed that bumblebees may prefer nectar concentrations with 3 or 4 percent less sugar than previously anticipated, in order to avoid being slowed down too much during regurgitation.

This “small penalty” assessed when bees choose highly concentrated nectar is a good reminder of “how complex foraging decisions are,” said Jarrad Prasifka, an entomologist with the U.S. Department of Agriculture, who was not involved in the study.

Because different plant varietals can produce vastly different types of nectar, Dr. Pattrick and Mr. Symington hope their work will influence which ones people choose to grow, in order to ensure each pollinator is “getting a good reward for her services,” Mr. Symington said.

Bees do so much for us — making it a little easier for them to barf seems only fair.