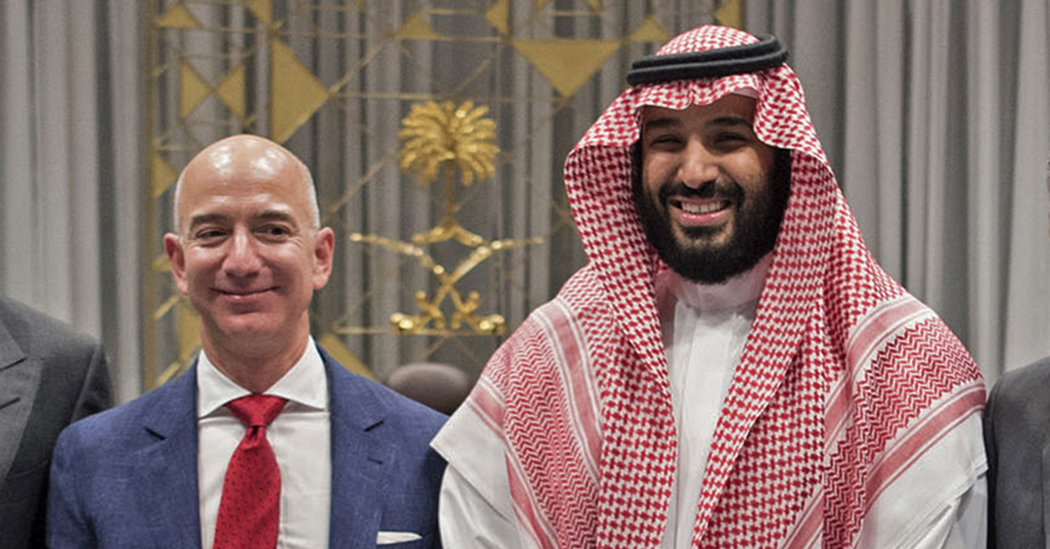 A WhatsApp account belonging to Saudi Arabia’s Crown Prince Mohammed bin Salman appears to have been used to hack into the cellphone of Jeff Bezos in an effort to “influence, if not silence” reporting on the kingdom by The Washington Post, two United Nations human rights experts said on Wednesday.

Mr. Bezos, the billionaire owner of Amazon, who also owns The Washington Post, received an encrypted video from the crown prince loaded with digital spyware that enabled surveillance of his cellphone starting in May 2018, the United Nations experts said in a statement. At the time, the government of Saudi Arabia had grown critical of The Post’s coverage of the kingdom, and particularly the work of Jamal Khashoggi, a columnist for the paper, whose writing criticized the crown prince.

Six months after the hack of Mr. Bezos’s phone, Mr. Khashoggi was lured into the Saudi consulate in Istanbul, where he was killed and dismembered by a team of Saudi agents. The Central Intelligence Agency has concluded that Crown Prince Mohammed likely ordered the murder.

In their statement on Wednesday, the United Nations experts drew a direct line between the hack and Mr. Khashoggi’s killing.

“At a time when Saudi Arabia was supposedly investigating the killing of Mr. Khashoggi, and prosecuting those it deemed responsible, it was clandestinely waging a massive online campaign against Mr. Bezos and Amazon targeting him principally as the owner of The Washington Post,” the experts said.

The Saudi Embassy in Washington wrote on Twitter on Wednesday that the accusation that the kingdom was involved in hacking Mr. Bezos’ phone was “absurd.” It called for an investigation, but did not say who should carry it out.

The statement on the hack by the United Nations experts adds to the pressure on Crown Prince Mohammed — essentially accusing him of new criminality at a time when the kingdom is still fighting the negative publicity generated by the killing of Mr. Khashoggi.

Their statement referenced a 2019 forensic analysis of Mr. Bezos’s phone that assessed with “medium to high confidence” that his phone had been infiltrated on May 1, 2018, via an MP4 video file sent from a WhatsApp account utilized personally by the Saudi crown prince. The report, which was reviewed by The New York Times, indicated that Mr. Bezos continued to receive messages from the crown prince’s WhatsApp account after Mr. Khashoggi’s death.

According to the report, Mr. Bezos received a message from the crown prince’s account in late 2018 that suggested that the prince had intimate knowledge of Mr. Bezos’ private life.