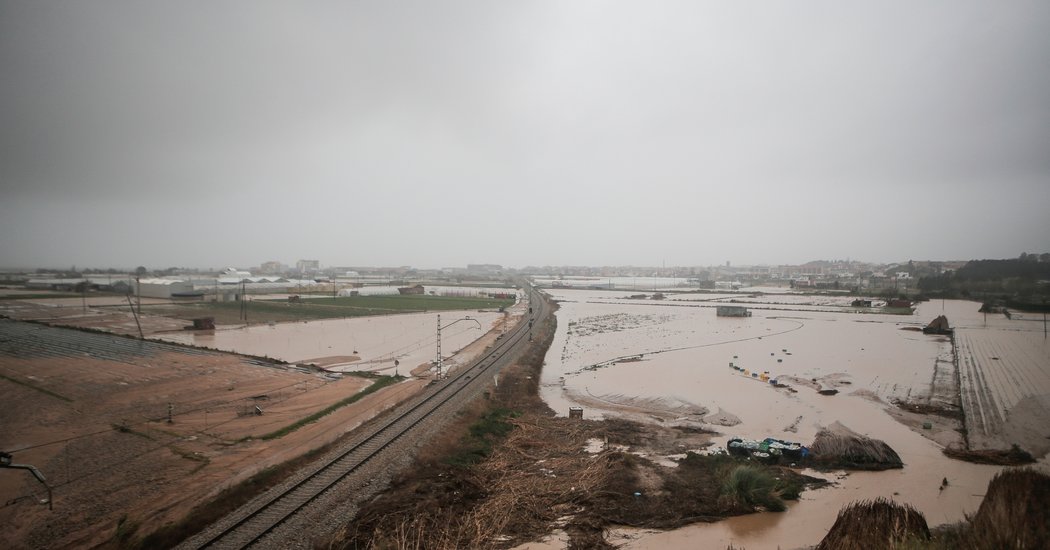 MADRID — A powerful winter storm in Spain has killed at least 10 people after battering the country for days, destroying bridges, cutting off roads and railway lines and flooding vast swaths of farmland.

Even as the storm moved north, triggering weather alerts for parts of France, tens of thousands of people across the country were still recovering on Thursday from driving rains and pounding waves that wreaked havoc in coastal towns and villages.

Further inland, residents began the process of digging themselves out after heavy snowfalls that left villages cut off from assistance.

Since last weekend, the eastern coast of Spain has been regularly hit by winds that reached over 160 miles per hour, the strongest in the country since 1992, according to the Spanish weather service.

In the Balearic Islands, which are in the Mediterranean off eastern Spain, waves cresting at more than 45 feet swept away some popular beaches and smashed into seafront houses.

Dani Palacios, the head of beach services for Barcelona, told the local broadcaster Betevé that it was the worst storm the region had seen in decades.

On Wednesday, another 600 people were evacuated from their homes in Catalonia, in northeast Spain. The authorities advised other residents living near the Ter and Onyar rivers to either leave their houses or move to an upstairs floor, amid fears that further rainfall could cause both rivers to burst their banks.

The death toll climbed to 10 on Wednesday after the authorities confirmed that a man was killed in the port of Palamós, a town in Catalonia, as he tried to check the state of his boat.

Emergency services in Palamós were continuing to search for another person who is believed to have fallen into the sea, one of several people in the area still reported missing since the passage of the storm.

Three other people are missing in the Balearic Islands, including a British man who was exploring the area’s canyons when the storm hit.

One of the worst affected spots was the delta of the Ebro River, where rice paddies were flooded by the surge of the sea, which advanced nearly two miles inland.

“We can’t remember anything similar ever happening,” Mayor Lluis Soler of Deltebre told the radio station Cadena SER. “It’s dramatic to see how the river has overflowed and the sea has traveled.”

Deadly storms have hit Spain this winter. A few days before Christmas, six people were killed in different parts of the country by storms that also swept through Portugal and southern France, also forcing flight cancellations and the temporary closure of part of the country’s rail and road networks.

It could be some time before the full extent of the damage wrought by this storm comes into focus, particularly in the farming areas of eastern Spain.