GLINICA, Bosnia and Herzegovina — The hills on the Bosnian-Croatian border have not been a battleground since the end of the Bosnian war, a quarter-century ago. But to some farmers in remote parts of the Bosnian side, it sometimes still resembles a conflict zone.

By night, they hear the screams. By day, they can see the Croatian police beating undocumented migrants back into Bosnia. Sometimes, they can even hear shooting. And then, a few minutes later, a knock at the door, as the migrants, nursing bruised or broken limbs, beg for food and clothes. 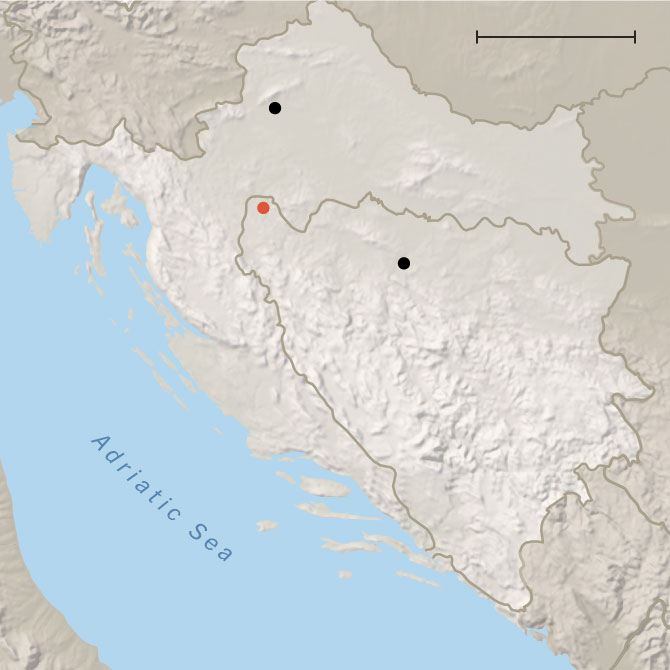 “It reminds me of the war,” said a farmer living yards from the border, Merima Cuturic, once a refugee herself. “Especially at night, when the shouting starts.”

This unlikely gantlet in the western Balkans is what remains of the great migration of 2015, when more than a million undocumented migrants landed in Europe. At the time, most crossed the sea between Turkey and Greece, and then made their way through Hungary to wealthier destinations like Germany.

But Turkey, Greece and Hungary have since made it far more difficult to make such a journey, reducing undocumented migration by more than 90 percent. Those still risking the trip tend to take a new route through Bosnia and Herzegovina, a country virtually untouched by the crisis in 2015. These days its border is less tightly controlled than others, making illegal entry less challenging.

Two years ago, just 750 migrants were recorded passing through Bosnia. In 2019, that figure rose to about 29,000 — most of them fleeing conflict or poverty in Afghanistan, Iraq, Morocco and Pakistan.

“It’s the only route currently open if you want to get from Greece to the other parts of the European Union,” said Peter Van Der Auweraert, head of mission for the International Organization for Migration, a department of the United Nations.

But that depends on one’s definition of open.

To leave Bosnia, migrants must cross the icy hills and mountains that line the northern border with Croatia. Former battlefields, the slopes still contain land mines from the Balkan wars.

Migrants who make it safely through the snow are usually met with a brutal response by the Croatian authorities.

In Northern Europe, the 2015 crisis is over — and the Croatians are determined to keep it that way.

For more than a year, the Croatian police have systematically seized migrants spotted entering the country from Bosnia and forced them back across the border without letting them apply for asylum.

In interviews in Bosnia last month, dozens of migrants, residents, doctors and aid workers provided a consistent account of migrants being deported without due process — and often beaten and robbed before being dumped in remote areas, like Glinica.

“When they catch you, they take everything,” said Sajid Khan, who fled Kunduz, Afghanistan, in 2015, when the Taliban captured the city.

“They take your jacket, shoes, socks,” said Mr. Khan, 24. “They just leave your trousers and T-shirt.”

The detritus in the woods near Glinica gives credibility to these assertions. A stream runs through the woods, under a small footbridge that connects Bosnia to Croatia. The Bosnian bank is covered with jackets, trousers, sweatshirts and shoes.

Here and there are smashed phones and ripped-out SIM cards. Also sardine tins, a toothbrush and an olive jar.

According to villagers and shepherds, this is one of the places where the Croatian police briefly enter Bosnia, dumping migrants rounded up along the border and stripping them of their belongings. It is also where police officers fired bullets to scare migrants in October 2018, nearly hitting Ms. Cuturic’s son, she said.

“We have a significant amount of patients who’ve experienced violence,” said François Giddey, who leads local operations for Doctors Without Borders, a medical charity that treats wounded migrants.

That violence includes being burned with lighters and being submerged in the icy river, Mr. Giddey said. But “the most common” thing, he added, is being beaten with sticks.

“It could be all over the body,” he said, “especially legs and feet, to prevent them from walking.”

A Times journalist interviewed two Afghan men with recently broken wrists. Both said the fractures were caused by beatings from the Croatian police.

The Croatian police are so eager to deport undocumented migrants that they have even expelled at least three Nigerians who entered Croatia legally. Two of them were in the country to compete in a table-tennis tournament in November, while the third had a visa that was valid until next March. None had previously visited Bosnia, and all were arrested in the Croatian capital, Zagreb, far from the Bosnian border.

In an emailed statement, the Croatian Interior Ministry dismissed claims of violence as “fabrications,” denied playing any role in the Nigerians’ expulsions, and said that Croatian officials had never illegally entered Bosnian territory to deport migrants.

Migrants “most frequently falsely accuse police officers of violence, thinking that it might aid them in a new attempt to enter the Republic of Croatia and continue on their path toward their destination countries,” the ministry added.

One reason the migrants attempt to enter Croatia is because the situation in Bosnia is often not much better than what they left behind.

Until early December, hundreds of migrants were housed in a remote camp erected on the site of an old dump, halfway up a snow-capped mountain. The camp was surrounded by a minefield that was never properly cleared after the war. At night, wild boars snuffled outside the tents, searching for food scraps. Inside the tents, the floors were often soaked with rainwater.

Drinking water was supplied only in the morning. With no working toilets, most migrants relieved themselves in the mud on the edge of the camp. The ground there was strewn with feces.

“This place is not for the human,” Mr. Khan, the Afghan from Kunduz, said the day before the camp closed.

Starving, thirsty and desperate, migrants would scour a nearby village for food and water, sometimes breaking into houses and scaring the few villagers still living there.

In a historical irony, the villagers had fled their homes 25 years ago, when the mountainside was contested by Bosniak, Serb and Croat troops. Some never returned, and many of the houses stand empty to this day.

Those who remain often find common cause with the migrants, giving them fruit and bread. But several residents have also grown fearful and now lock their doors for the first time in their lives.

“We identify with them, and that’s why we feed them,” said Kata Majstorovic, 79. “But at the same time, there are so many!”

These days, the limited assistance for migrants in Bosnia is partly a result of the fallout from the war.

To keep the peace in a country still divided along ethnic lines, decision-making is often delegated to the regional authorities, making it harder to coordinate a national response to migration. The absence of a national government for the past year, as political parties struggled to form a governing coalition, has also contributed to the lethargy.

About 7,500 migrants are currently seeking to stay in Bosnia, but hundreds are forced to sleep in squats or on the streets because not enough official camps have been built.

“The frustrating part is that it’s not a matter of financial resources,” said Mr. Van Der Auweraert, of the International Organization for Migration, which runs the camps on behalf of the government.

The European Union has allocated roughly $40 million to help Bosnia provide for migrants — more than enough to house a few thousand people. But the Bosnian government has been too slow to allocate sites for new camps, meaning that not all the money has been spent, Mr. Van Der Auweraert said.

“If the political decision-making had been different, we would have had enough sites,” he added.

But as bad as life can be in Bosnia, Mr. Khan is still glad he left Afghanistan.