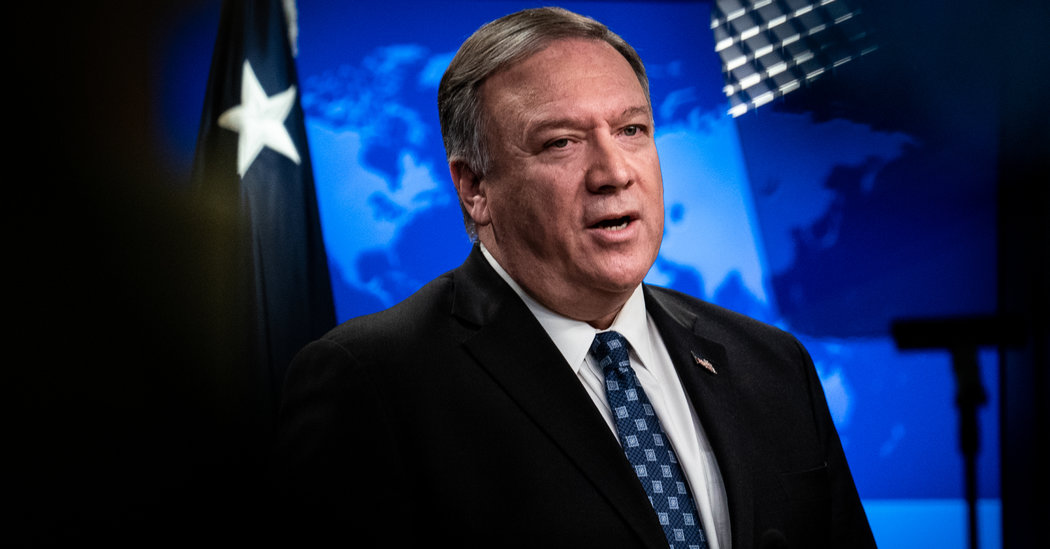 Secretary of State Mike Pompeo, apparently angered by a reporter’s questions about the Trump administration’s firing of the United States ambassador to Ukraine, lashed out at her after the interview, cursing and challenging her to find Ukraine on a map, according to the reporter.

Mr. Pompeo, who is known for his bombast, occasional thin skin and contentious relationship with many in the State Department press corps, had declined to say during the interview whether he owed an apology to the ambassador, Marie L. Yovanovitch.

Asked whether he could point to specific remarks in which he defended Ms. Yovanovitch, Mr. Pompeo said: “I’ve said all I’m going to say today. Thank you. Thanks for the repeated opportunity to do so. I appreciate that.”

Soon after that, Ms. Kelly said, an aide to Mr. Pompeo ended the roughly nine-minute interview, and Mr. Pompeo glared at her and left the room — hardly an unusual reaction in hurly-burly Washington.

But in a broadcast later on NPR, Ms. Kelly described what happened next.

She said the aide who had stopped the interview reappeared and asked her to come with her, with no recorder. Ms. Kelly said she was taken to Mr. Pompeo’s private living room, where he was waiting, and “where he shouted at me for about the same amount of time as the interview itself had lasted.”

“He was not happy to have been questioned about Ukraine,” Ms. Kelly said on NPR. “He asked, ‘Do you think Americans care about Ukraine?’ He used the f-word in that sentence, and many others.”

Mr. Pompeo asked Ms. Kelly if she could find Ukraine on a map, and Ms. Kelly, whose reporting has taken her around the world — to Russia, North Korea and other countries — said, “Yes.”

“He called out for his aides to bring him a map of the world with no writing, no countries marked,” Ms. Kelly said. “I pointed to Ukraine. He put the map away. He said, ‘People will hear about this.’”

Ms. Kelly said that when Mr. Pompeo’s aide had summoned her to the room, the aide never asked that the meeting with Mr. Pompeo be kept off the record — nor would she have agreed to such an arrangement.

Ms. Kelly also said she told the State Department afterward that she planned to report on Mr. Pompeo’s tirade, and had not heard back.

The State Department did not respond to a request for comment on Friday. A spokeswoman for NPR said Ms. Kelly, a co-host of “All Things Considered,” was not available for further comment.

On NPR, Ms. Kelly said she had confirmed with the secretary’s aides before the interview that she planned to ask him about Iran and Ukraine, so the topic was not a surprise. But Mr. Pompeo still bristled at Ms. Kelly’s questions about Ms. Yovanovitch.

“I just don’t have anything else to say about that this morning,” he said at one point.

Ms. Yovanovitch was abruptly recalled from Ukraine last May and has become a key figure in the Senate impeachment trial of President Trump after she testified last year that she was the target of a smear campaign by the president’s personal lawyer Rudolph W. Giuliani and two of his associates, Lev Parnas and Igor Fruman. The two have since been indicted in a scheme to violate campaign finance laws.

Ms. Yovanovitch testified last year that she felt “threatened” by Mr. Trump after it emerged that he told the Ukrainian president she would “go through some things.” Mr. Trump has also disparaged Ms. Yovanovitch, a decorated 33-year veteran diplomat, on Twitter.