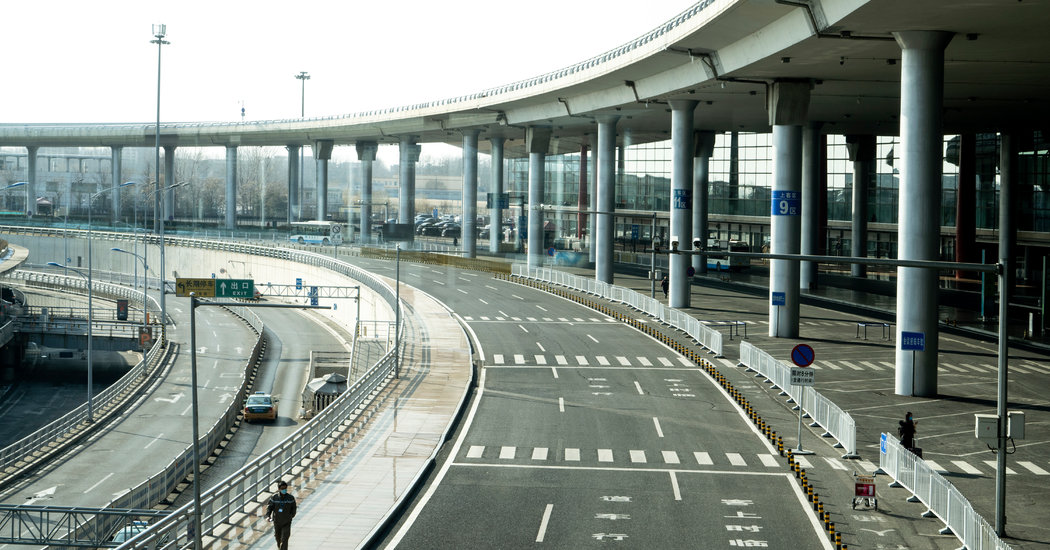 BEIJING — The Apple stores were among the busiest places still open in Beijing after the coronavirus outbreak, though employees forbade customers from trying the watches or AirPods.

Some people ventured in out of necessity, as ever. “My laptop is broken,” one woman said. For others they provided a rare communal gathering space, a break from the isolation, anxiety and fear that has settled on the city of 23 million ever since the epidemic began to emanate from central China.

Now the stores have closed, along with theaters, museums, cinemas, temples, barbers, hair salons, karaoke bars, and most other shops and restaurants. The Forbidden City has shut down “until further notice,” as has a popular section of the Great Wall in the breezy, wintry hills to the northeast, far from urban congestion.

Beijing is not under a strict, government-ordered lockdown, like that in Wuhan and other cities at the center of the epidemic. It has, however, has imposed restrictions on practically every aspect of life since declaring “the highest level of public health emergency” on Jan. 24.

This shutdown in all but name is occurring in city after city across China, disrupting life and creating dystopian vistas of a suddenly depopulated country.

Fliers from the Beijing government have been posted on shop windows and apartment buildings, urging everyone to take necessary precautions. Residents were encouraged to avoided “crowded places or public gatherings” — though most of those, including festivals celebrating the lunar new year, were canceled anyway.

Many stores and shopping centers have set up temperature checks for anyone entering. Some, including the Yves Saint Laurent in the upscale Sanlitun shopping district, have posted signs refusing entry to anyone not wearing a mask.

Suspicion has become its own contagion. “Stay there,” warned one man playing badminton with his daughter in Chaoyang Park, both wearing masks. “Don’t get close to us.”

Like most major cities, Beijing is a place of migrants seeking a better way of life, but now anyone from outside the capital has encountered open hostility — particularly those from Hubei Province, the center of the outbreak.

Some neighborhoods took it upon themselves to set up checkpoints and guard posts, prepared to turn away those who were returning from the infected zones after the Lunar New Year holidays.

One was Xifuheyuan, an apartment complex in eastern Beijing. Signs were posted announcing that anyone coming from Hubei would be sent to a hotel for 14 days of quarantine. It was not clear exactly how the complex’s guards intended to enforce the edict, but one who was carrying out checks promised that the authorities would foot the bill.

“The party is warmhearted,” the guard said, declining to give his name.

As word of checkpoints spread, Beijing’s deputy secretary general, Chen Bei, hastened to announce on Saturday that the authorities would not tolerate viral vigilantism.

At the same time, the city’s official announcements have encouraged anyone who has recently visited Hubei or been in contact with anyone who had to “inform your community authority.”

The Center for Disease Control even sent text messages to residents traveling to the infected region — apparently using information from cellular service providers — to abide by the lockdown in Wuhan and not return to Beijing. “We’ve been worrying about you all this time!” the text read.

Beijing residents originally from Hubei — everyone’s hometown is written on their national identification card — have in turn faced intrusive questioning about their travels or any visits from relatives, all in the name of public health.

The city, at last count, had 212 coronavirus cases and one death, though those figures might rise. A city official announced on Monday that five medical workers at Fuxing Hospital had been infected.

By all appearances, most Beijing residents have accepted the official advice and simply stayed home.

The effect has been to slow the sprawling capital — the second-largest city in China after Shanghai and the beating heart of the Communist Party state — to an eerie, uncharacteristic crawl. Buses and subway trains are running, but they are nearly empty of passengers. Traffic, which is usually chronically bad, has disappeared.

Even China’s celebrated delivery drivers — the frenetic, ice-in-their-veins food and package scooter riders who have accelerated the country’s e-commerce boom — have seen work plummet. Some delivery companies have offered “no touch” service for food deliveries, while others have sent drivers with certificates recording their temperatures.

One driver, Liu Chaohui, complained that business had fallen 90 percent since the outbreak started, defying conventional wisdom that people stuck at home would be ordering in.

“I’m going to quit after this month if it continues to be like this,” he said.

The epidemic burst into public view only days before the start of the Lunar New Year, a weeklong holiday during which millions of people nationwide travel to their ancestral homes.

The holiday should have ended last Friday, but Beijing officials extended it through Monday and effectively extended it again by ordering nonessential employees to work from home until at least Feb. 10.

The order excluded essential industries, including hospitals and clinics, municipal workers, and retailers and restaurants. A few restaurants remained open throughout the holiday, but most shut down and are now struggling to reopen, in part because so many workers who left the city have had a hard time returning.

The pace of the city picked up only marginally on Monday, in large part because of the return of government workers. The Ministry of Foreign Affairs held its daily briefing, though virtually, taking questions sent by WeChat, the country’s ubiquitous social media platform.

At Beijing Capital International Airport, a new banner hanging in the concourse for the express train from the city center hailed those helping to contain the coronavirus. “Kudos to all the medical workers who fight against the epidemic at the front line and all volunteers in society!” it read.

One place showing frenetic activity was the grounds of Xiaotangshan Hospital in northern Beijing. It was built in seven days in 2003 to treat patients of the SARS epidemic and is now being renovated.

In previous years, the Lunar New Year holiday slowed the city down but not the parks, museums, shopping malls and other public places where people spent their free time. Now even the public places that are open are practically empty.

In the Temple of Earth, a park north of Tiananmen Square, the public chorus that gathers to sing every morning has stopped coming. So have the regular groups of people juggling shuttlecocks with their feet, and the hardy retirees who regularly work out on the exercise equipment in the park’s northeast corner.

The only sound in the park on a recent day was a loudspeaker announcement repeating the advice posted on fliers about avoiding crowded places, refraining from spitting and washing hands frequently. Anyone entering any park must, by government edict, wear a mask and have their temperature checked.

Not far from the Temple of Earth, the Lama Temple, the city’s most important Buddhist site, remains closed in what would normally have been its busiest season.

Wang Haixia, a 62-year-old retiree, stood watch on Monday on a nearby street. She was one of hundreds of volunteers, sporting red arm bands to convey authority, who have answered a call from the Communist Party to do their part in this time of challenge.

“We’re just overlooking the neighborhood,” she explained, adding that she and her colleagues would call the local authorities the moment it seemed necessary to do so.

No one knows when things will get back to normal.

“Of course, all of us want this to end as early as possible,” Ms. Wang said. “Nobody wants to live their life like this.”

Research was contributed by Claire Fu, Zoe Mou and Amber Wang in Beijing, and Elaine Yu in Hong Kong.