The all-new Toyota GR Supra was only introduced for the 2020 model year but the Japanese automaker has gone ahead and made big updates for 2021.

Besides a lower price point, the four-cylinder Supra will also offer improved fuel economy, though no mileage figures have been released yet. The increased efficiency will be due to the smaller engine and lower weight. This is where things get really interesting, because the entry-level Supra tips the scales at 3,181 lbs (1,443 kg), while the 2021 GR Supra 3.0 weighs 3,400 lbs (1,542 kg).

Lighter engine aside, the Supra 2.0 features smaller (and thus lighter) front brake rotors with single-piston calipers instead of four-piston, an audio system with four speakers instead of 10, and manually adjustable seats instead of 14-way power-adjustable. Furthermore, the four-cylinder Supra lacks the six-cylinder model’s Active Differential and Adaptive Suspension.

Since the weight reduction is spread throughout the car, the near 50:50 weight distribution is maintained. Toyota does not say it but the lighter front end will likely enable the Supra 2.0 to deliver sharper turn-in and increased agility in corners.

Toyota’s engineers also worked on increasing roll resistance and enhancing cornering stability of the Supra 3.0. They achieved increased lateral rigidity by adding lightweight aluminum braces that tie the strut towers to the radiator support, along with front and rear bump stops and new damper tuning.

While at it, they also adapted the programming for the electric power steering (EPS), Adaptive Variable Suspension (AVS), Vehicle Stability Control (VSC) and Active Differential to the hardware changes. As a result, the six-cylinder Supra is said to be more stable through quick transitions, such as compound turns.

The third big update for 2021 is the new GR Supra A91 Edition which replaces the 2020 Launch Edition. Available in a run of 1,000 units, the 2021 Toyota GR Supra A91 Edition comes with the bigger engine and offers the choice of two colors: Nocturnal or the exclusive Refraction.

Finally, all 2021 Supras get the 8.8-inch infotainment display as standard instead of the previous 6.5-inch unit. Changes are rounded out by the addition of the optional Safety and Technology Package and Driver’s Assist Package (only for 3.0 Premium and A91 Edition).

The 2021 Toyota GR Supra will arrive at U.S. dealers in June, with pricing to be announced closer to launch. 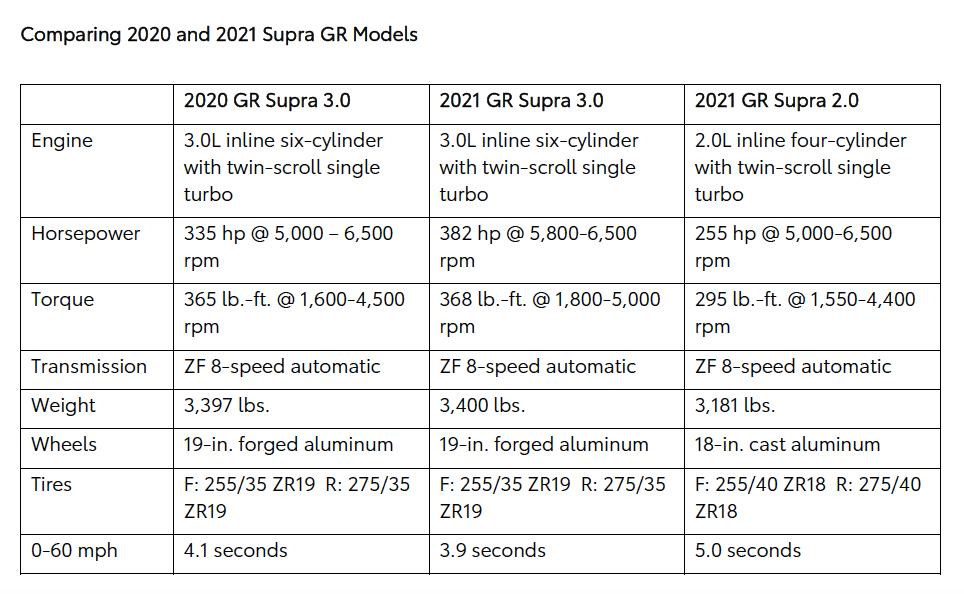