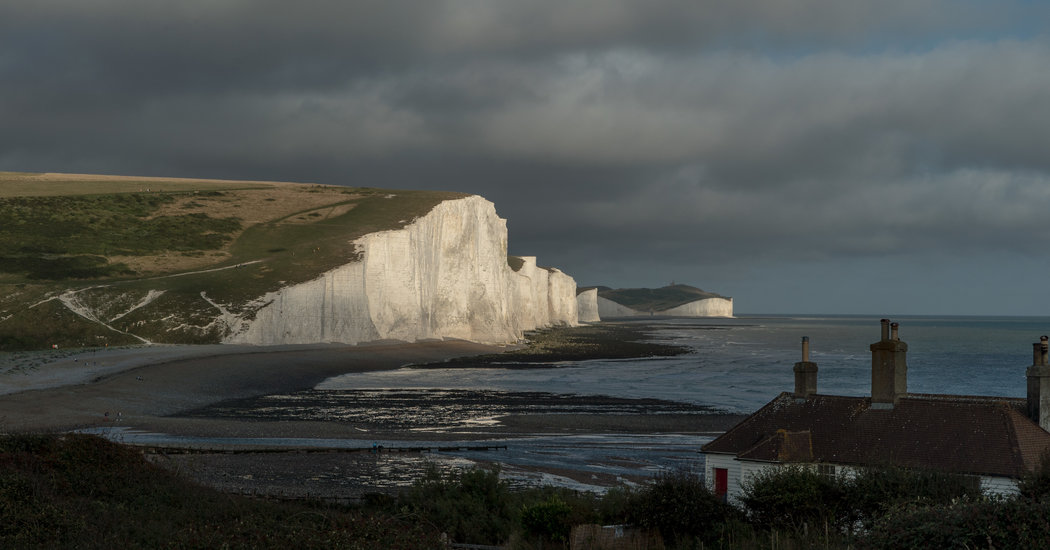 LONDON — One dam would stretch some 300 miles from the coast of Scotland to Norway. The other, roughly 100 miles, would rise in the waters between northern France and Southeastern England.

Together, the mammoth structures proposed by scientists would completely enclose the North Sea and offer protection for tens of millions of Europeans threatened by rising sea levels caused by climate change.

The scientists behind the proposal, outlined in a paper published on Thursday in the American Journal of Meteorology, said that the scale of the project — which exists only in the broadest outlines at this point — reflected the urgency of the crisis.

“See this as a warning,” said one of the authors, Sjoerd Groeskamp of the Royal Netherlands Institute for Sea Research. “What we’re saying is: Here’s a plan, a plan we don’t want. But if we end up needing it, then it’s technically and financially feasible.”

The project would be one of the largest engineering feats ever attempted on the planet and would cost anywhere from $250 billion to $550 billion, according to the proposal — a cost the authors suggest could be covered by more than a dozen Northern European countries that would be protected by the barrier.

Some experts expressed doubt that damming the North Sea was the best solution for dealing with rising sea levels.

“My initial reaction is skepticism,” said Craig Goff, who has been a dam safety engineer in Britain for about 20 years. “I suspect that it would be cheaper and quicker to build defenses along the coastline of Europe than to build dam structures across the North Sea.”

Even the scientists behind the proposal acknowledge that attempting to dam the entire North Sea is not an ideal solution.

Much better, they said, would be for the proposal to serve as an alarm, vividly illustrating the kind of drastic action that might become necessary if global leaders cannot find a way to address climate change.

“It might be impossible to truly fathom the magnitude of the threat” posed by rising sea levels, the scientists wrote.“However, conceptualizing the scale of the solutions required to protect ourselves against global-mean sea level rise aids in our ability to acknowledge and understand the threat that sea level rise poses.”

The other co-author of the paper, Joakim Kjellsson, a Swedish professor at the Helmholtz Centre for Ocean Research in Kiel, Germany, said that no official proposal had been made to the nations that would be protected by the barrier.

“In the end, we came to realize it’s such an extreme solution that it would be much better and much less dramatic to reduce our CO2 emissions and curb global warming so that we don’t need these kind of things,” he said in an interview.

If nothing changes, Mr. Kjellsson said, millions of people will be forced from their homes — effectively becoming climate refugees. Even today, coastal cities such as San Francisco and Manila are faced with the consequences of sea level rise.

By 2050, some 150 million people in low-lying coastal cities could find themselves below the high-tide line, threatening to submerge whole cities, according to a report by Climate Central, a science organization based in New Jersey.

The proposed dams would dwarf the largest such barriers built so far — the Afsluitdijk in the Netherlands, and the Saemangeum Seawall, in South Korea, which at 21 miles in length is the world’s longest sea wall.

For scale, the North Sea dams would require at least 51 billion tons of sand — roughly equal to the total annual use of that commodity in construction projects around the world.

While the depths of waters are manageable in much of the proposed area to be covered, engineers would also have to contend with the Norwegian Trench, which plunges to a depth of nearly 1,000 feet.

The authors say that technology used by fixed oil rigs could be adapted for the dam.

Building such structures across the North Sea would forever alter the ecological makeup of the area. Isolating the sea would stop the tidal flow, eventually turning it into a freshwater lake of sorts which would make it unlivable for species that depend on salt water.

That, in turn, would have economic consequences, including on the income from North Sea fishing.

But, as the authors of the proposal note, the good choices become fewer as the threat of rising sea levels increases.

If there is one nation that is familiar with the risks and challenges of dealing with the sea, it is the Netherlands, where much of the country exists on land below sea level.

“It’s a fairly extreme plan for the far future,” said Ferdinand Diermanse, an expert on flood risk at Deltares, a Dutch research institute for water. But when talking about the possibility of a sea level rise of multiple meters, he noted, “there are no simple solutions.”