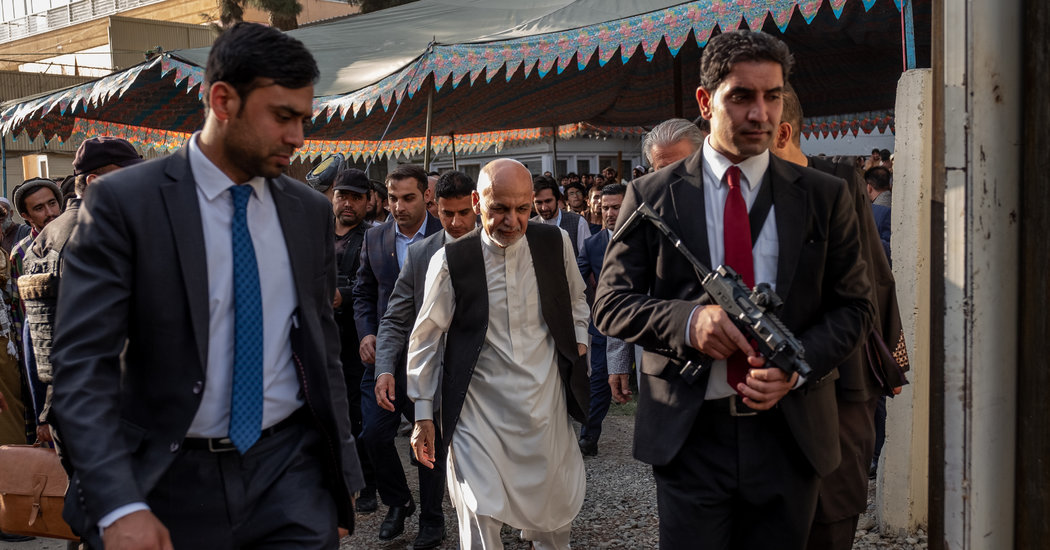 KABUL, Afghanistan — President Ashraf Ghani on Tuesday was declared the winner of Afghanistan’s presidential vote after months of delayed results and bitter dispute. Opposition politicians have protested the result, threatening a full-blown political crisis on the cusp of a U.S. peace deal with the Taliban.

Supporters of Mr. Ghani’s leading challenger, Abdullah Abdullah, accuse Afghanistan’s election commission of favoring Mr. Ghani and have threatened to form a parallel government if the commission announced results that did not satisfy their grievances.

The vote, held in September amid a record number of Taliban attacks intended to destabilize the election, had itself been repeatedly delayed and marred by uncertainty as a peace deal between the U.S. and the Taliban over the future of Afghanistan was nearing finalization. But President Trump snubbed the talks just weeks before the election was expected, opening the way for the vote to proceed.

In a news conference announcing the result after an audit of about 15 percent of the total vote, the election commission’s chief said that Mr. Ghani had won with the narrowest of margins — 50.64 percent of the vote, just surpassing the 50 percent minimum required for a win. Mr. Abdullah received 39.5 percent, according to the commission.

The win gives Mr. Ghani another five-year term as president.

Mr. Abdullah and several other candidates have disputed roughly 300,000 votes from a low turnout of about 1.8 million. Among those were 100,000 ballots registered in the system either before or after voting hours — in some cases by weeks or months.

Mr. Abdullah’s supporters say those were fraudulent votes cast in favor of Mr. Ghani. The election commission has attributed the irregularities to human error in setting the time and date of devices that recorded the votes.

Faze Ahmad Manawi, a senior member of Mr. Abdullah’s team, had said hours before the announcement that “neither the institution called independent election commission has legitimacy in our eyes, nor the result they might announce.”