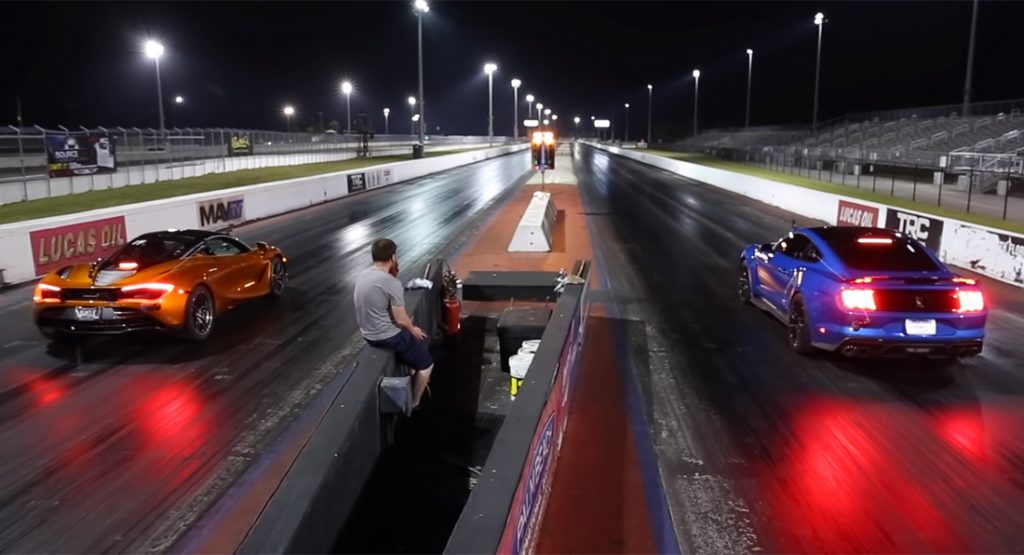 The McLaren 720S and Ford Mustang Shelby GT500 are two of the most powerful, rear-wheel drive cars currently on the market and are not to be messed with but just which is quicker down the quarter-mile?

To find out, DragTimes pitted the two together for a series of head-to-head drag races and the duo made for three very entertaining races.

The first thing to note is that the GT500 featured has undergone a tune and features an aftermarket exhaust and intake so it now produces 800 hp. By comparison, the McLaren 720S’s powertrain remains untouched meaning its 4.0-liter twin-turbo V8 continues to pump out 710 hp. Both cars were running on Toyota R888R tires.

Video: Pick Up This Gorgeous Red 2018 McLaren 720S And Scare Off Hypercars

It probably shouldn’t come as a surprise that the McLaren has a very significant advantage as it weighs more than 1,000 lbs (453 kg) less than the Ford, allowing it to launch off the line quicker. However, the GT500 puts up a very good fight and despite having extraordinary levels of power, is able to put all of its grunt to the pavement with surprisingly little wheelspin. It also happens to sound truly demonic thanks to the aftermarket exhaust system that lets the 5.2-liter supercharged V8 breathe easier and really scream.

Both cars can run down the quarter-mile in under 11 seconds but as you’ll see, the McLaren is a little faster, recording times in the low 10-second range while the Mustang sits nearer the 10.5-second mark. Both have similar trap speeds of around 140 mph (225 km/h).