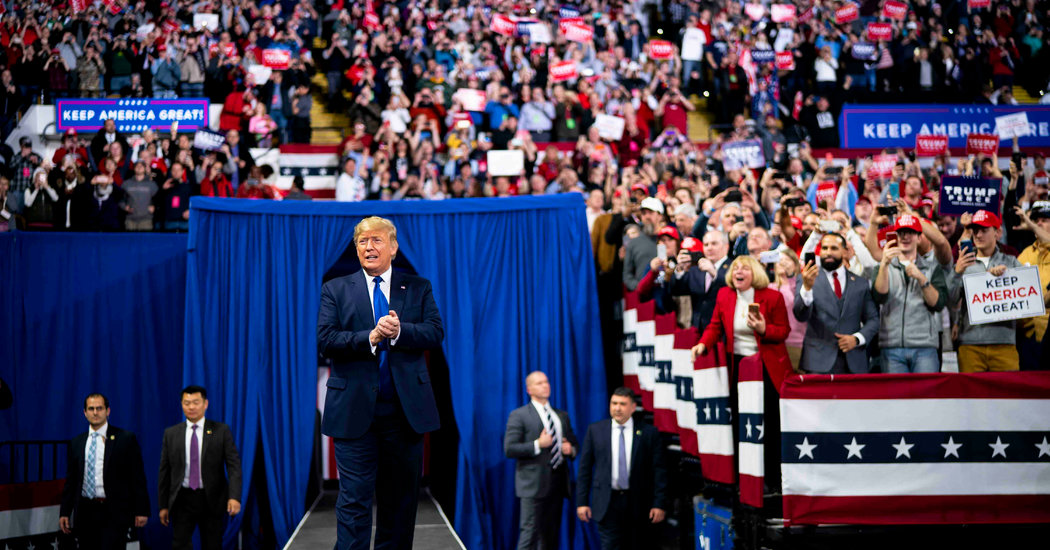 MUNICH — There was a lot for diplomats and policymakers to consider when they gathered at a recent global security conference in Munich: China rising, Russia meddling, Germany weakening. But the inescapable question — the one that might change the world most immediately for Europe — was whether President Trump would win re-election in November.

Rightly or wrongly, the consensus among European diplomats and analysts is that Mr. Trump is likely to get a second term. But there was also consensus that such an event would be a significant part of a drastic, and potentially permanent, shift in global affairs for which Europe remains woefully unprepared.

Mr. Trump’s re-election would mark a fundamental change, said François Heisbourg, a French analyst. “Eight years in political terms is an era, not an error. And it would undermine the reality of American democracy.”

Secretary of State Mike Pompeo’s admonishment to the Europeans to accept American leadership and “reality” was met at the conference with stony silence. Traditional American allies were far from assured that they would be able to depend on the United States in another Trump term.

More than that, they sense the potential for a real parting of ways, given policy differences on issues as varied as climate change, Iran, trade and allowing the Chinese company Huawei to build next-generation wireless networks. Many expect that divide would only widen if Mr. Trump remains in office.

Wolfgang Ischinger, the director of the conference and a former German ambassador to Washington, noted Mr. Trump’s hostility to European allies, asking: “Why do we currently appear to live on different planets?”

Many Europeans fear that winning a second term would leave Mr. Trump feeling ever freer and more empowered to pursue his every whim in global affairs, including what some consider to be the very real possibility of withdrawing the United States from the NATO alliance that has kept peace in Europe for more than 70 years.

“Trust in the United States would be abysmally low, and his re-election would undermine the alliance in two ways,” Mr. Heisbourg said. “First, he doesn’t believe in alliances, but he is also very unpredictable. No one, including Trump, has any idea where he will take any of this, and the unpredictability increases the unreliability.”

Many anticipate a collapse in the already eroding trust in American leadership and credibility.

A second Trump term “will be more of the same and yet worse,” said Amanda Sloat, a former State Department official now at the Brookings Institution.

Mr. Trump has questioned the American commitment to NATO. “That has been corrosive to the underlying trust among allies,” Ms. Sloat said. “That might be reversible after one term, but eight years of Trump would be deeply damaging. And Europe has not yet developed the capabilities to defend itself separate from the United States.”

Europeans saw Mr. Trump’s election, by such a narrow margin, as “maybe a blip,” said Daniel S. Hamilton, a professor at the School of Advanced International Studies at Johns Hopkins.

“If Americans re-elect him, it’s a strategic decision,” Mr. Hamilton said. “But it’s hard to know what the Europeans would actually do about it.”

Even though European officials generally agree that the change in global affairs could hurt them, how they can respond is another matter.

There is already widespread talk of European “strategic autonomy” and of the need to develop what the European Union’s foreign policy chief, Josep Borrell Fontelles, calls “an appetite for power.”

A second Trump term “will be four more years of ‘America First,’” said Robin Niblett, director of the international affairs think tank Chatham House. “Europe would realize more than before that it has to fend for itself.”

At the Munich conference, President Emmanuel Macron of France essentially pleaded for Europeans to see challenges like Russia and China with a European lens, not a trans-Atlantic one, and to do more to create a serious culture of security and self-reliance.

Even the German president, Frank-Walter Steinmeier, while criticizing his own country’s moral sanctimony, blasted Mr. Trump’s unilateralism as deeply damaging to the alliance.

“‘Great again,’ even at the expense of neighbors and partners,” Mr. Steinmeier said, referring to the campaign slogan that propelled Mr. Trump to the presidency. “Thinking and acting this way hurts us all,” he said, adding that it produced “more mistrust, more armament, less security.”

Many expect the Europeans to heighten talk of independence, but to have trouble creating a credible security alternative, and thus, in the end, they would find ways to get along with Mr. Trump — or get around him — rather than confront him openly.

“There are a lot of voices saying that ‘we have to do more for strategic autonomy,’ cloaked in emancipatory rhetoric,” Mr. Hamilton said. “But there’s no consensus on what their own interests are. They may do just enough to annoy the Americans, but not enough to be serious.”

Dmitri Trenin, director of the Carnegie Moscow Center, said that re-election “will enhance and consolidate the direction of U.S. foreign policy and make it impossible for a successor to change it in a big way.”

Those changes would affect the United States’ allies more than its enemies, he said. “Europe really has nowhere to go. It can’t stand on its own feet and won’t be a superpower, so it will have to accept the new terms Trump is laying down.”

“His belief that allies weaken the U.S., rather than strengthen it, is one of his greatest failings, while he will continue to embrace autocrats, rather than our true friends, like Macron and Merkel,” Mr. Burns said.

The danger “is that Europe might begin to see itself as a third pole in global politics between China and the U.S.,” he added. “That would be a major strategic loss for the U.S. in power and influence.”

Ivo Daalder, a former American ambassador to NATO and president of the Chicago Council on Global Affairs, noted that Europeans thought at first that they could wait out Mr. Trump.

“But if Trump is re-elected,” Mr. Daalder said, “They won’t wait any more, but will more openly reject him.”

Europeans, he said, might band together more effectively to try to balance the United States, as Mr. Macron is urging, or they might “choose another side,” moving closer to Moscow and Beijing, fearing loss of exports and instability in the Middle East.

That policy might suit France, Germany, Italy and Spain, he said, but it would add pressure on Central European nations that see Washington as their only real deterrent against Russia and generally support Mr. Trump.

Europeans could also “dig their heads in the sand and hope it finally all goes away,” Mr. Daalder said. “But nothing will be orderly,” and Europe will continue to be squeezed by China, Russia and the United States.

Claudia Major, a defense expert with the German Institute for International and Security Affairs, said that much will depend “on what kind of Europe Trump meets.” It could be a strengthened one or a divided one that would allow bigger powers to take control.

“There are so many European answers,” she said, “because there so many different countries and interests.”