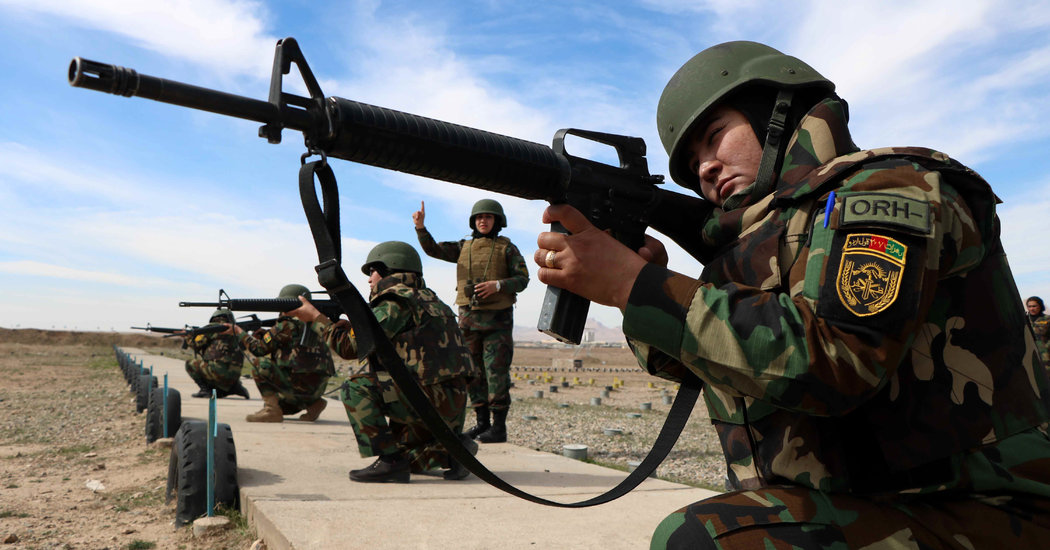 KABUL, Afghanistan — A weeklong reduction in violence across Afghanistan, a major condition for the United States to formally sign its initial peace deal with the Taliban, goes into effect early Saturday, right after midnight, Afghan officials said Friday.

The measure, in which all sides are expected to end most attacks in an arrangement that comes close to a cease-fire, is the first step in the rollout of a conditions-based peace deal that lays out a timeline for the withdrawal of the American troops from Afghanistan. Officials hope the process will immediately bring the Afghan government and Taliban together to then negotiate a political settlement that would end the insurgency.

But the government is caught up in an electoral crisis, threatening to derail what has been a fragile and interrupted peace process.

The declaration that President Ashraf Ghani had won another five-year term on Tuesday, after results had been acrimoniously delayed for five months, has been challenged by his main opponent, Abdullah Abdullah, who accuses the election body of favoring the incumbent. Mr. Abdullah has also declared victory, and called on his supporters to form their own government.

That development will surely complicate attempts to open direct talks between the Afghan government and the Taliban even if the violence-reduction test is a success.

Zalmay Khalilzad, the chief U.S. negotiator, arrived in Kabul to discuss the details of the rollout, only to find new hurdles with an Afghan political elite at each other’s throats over the election results. He has been shuttling around Kabul, meeting the different factions.

“It is likely that these developments could add to the challenges Afghanistan faces, including the challenges of the peace process,” Molly Phee, Mr. Khalilzad’s deputy in the negotiations, said at an event at the U.S. Institute of Peace. “Our priority, and what we believe to be the priority of most Afghans, remains peace and the peace process.”

Ms. Phee said that if the seven-day test of violence reduction is seen as success, the U.S. and Taliban sides would sign their agreement.

“We believe we have established the conditions that can transform the trajectory of the conflict,” Ms. Phee said. “We should do all we can to not let this opportunity pass.”

Officials in Mr. Ghani’s government laid out only limited details about the violence-reduction test.

“The process of violence reduction starts on Feb. 22 and it is expected to last for seven days if everything goes according to plan,” said Javid Faisal, the spokesman for Afghanistan’s national security council. “This is a major opportunity, and the Afghan government is fully prepared. We hope that this can then lead to a comprehensive cease-fire and direct negotiations.”

Officials who have been briefed on the developments say the Taliban have agreed to hold back attacks on cities, highways, and major security outposts throughout the country for the next seven days. In return, the Afghan forces and the U.S. military, which has carried out extensive airstrikes in support of the Afghan forces in recent months, has agreed to hold back their operations and airstrikes.

In preparation for the start of the violence reduction test, President Ghani has been meeting all provincial security and political leaders in recent days.

“The president said there are about 80 attacks daily by the Taliban on average. If that is reduced to 10 attacks, that will be a sign that violence reduction is in effect,” said Babur Ishchi, the head of the provincial council in Jowzjan and who was part of one meeting. “There might be occasional firing on some distant outposts or on some convoys — that’s a separate issue.”