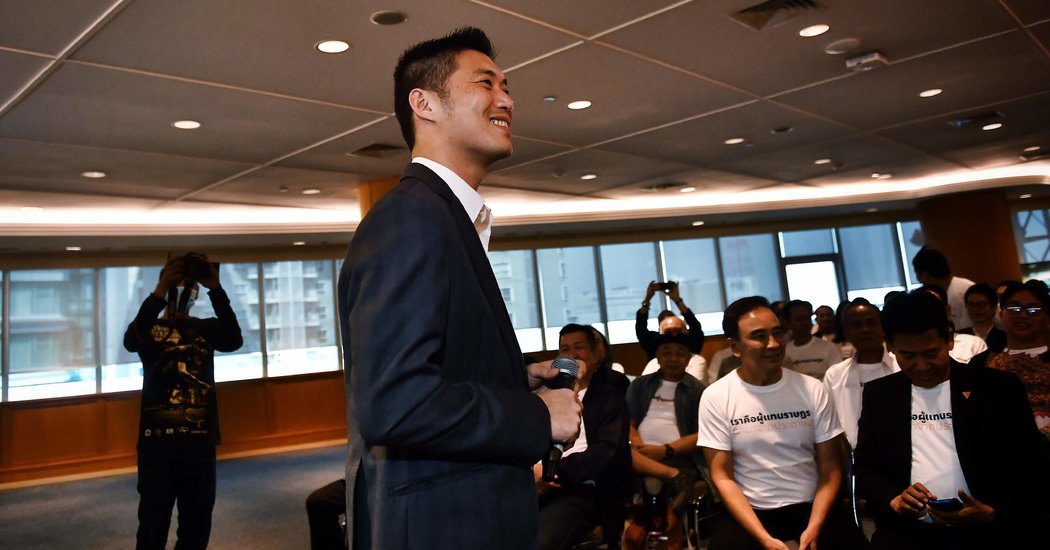 BANGKOK — Thailand’s most dynamic political force in years was ordered disbanded on Friday by the country’s Constitutional Court, in a ruling that rights groups say is part of a pattern of judicial harassment aimed at smothering democracy.

The Future Forward Party was found to have violated a law governing political parties by accepting a loan from its young tycoon leader, Thanathorn Juangroongruangkit, to fund an electoral campaign.

The party maintains that the 191 million baht loan, equivalent to about $6 million, was legitimate, and that the campaign financing rules are so ambiguous that it would have been impossible to know whether the loan contravened them. Other political parties have taken out loans without any legal ramifications.

For a country where the same politicians and army generals have dominated politics for decades, the Future Forward Party offered something fresh.

In elections last year, the first since an army coup in 2014, all of Future Forward’s candidates were first-time entrants. The party didn’t even exist a year before the elections.

Despite its neophyte status, the progressive opposition force surged to a third-place finish in the elections, capturing 81 of the 500 seats in the House of Representatives. (It now has 76.)

But the Constitutional Court’s ruling on Friday has blunted Future Forward’s political future, even if its founders have said they will simply form another political party.

Any replacement party will be shorn of its senior leadership. In addition to dissolving the party, the Constitutional Court’s ruling means that Future Forward’s senior executives will be banned from politics for 10 years.

“There is an intention to make the Future Forward Party vanish from Thai politics,” said Rangsiman Rome, a student activist turned member of Parliament for Future Forward. “We have been hit all the time, by so many cases, some of them so weird.”

There was an accusation, for instance, that a Facebook Live video featuring Mr. Thanathorn had violated a computer crimes law.

The cases have only mounted since then. Future Forward was threatened with dissolution for supposedly plotting to overthrow Thailand’s monarchy. The constitutional court rejected that case last month, but more than two dozen other cases are pending against the party’s executives.

“The courts have become a major institution that determines the political landscape in Thailand over the past decade,” said Purawich Watanasukh, a research fellow at King Prajadhipok’s Institute in Thailand.

The pending cases include allegations that the party violated public assembly laws by organizing a flash mob protest. Party leaders have been accused of sedition, which could lead to years in jail.

This week, members of the ruling coalition said that a parliamentary commission on corruption should look into whether Mr. Thanathorn’s mother once owned a plot of land that may have encroached on an off-limits forest.

Future Forward has even been accused of being in cahoots with the Illuminati, the 18th-century secret order that has featured in the world-domination fantasies of Hollywood screenwriters and conspiracy theorists.

Mr. Thanathorn, 41, was elected to Parliament last year, but he was barred from taking his seat. Some of his stock holdings were found to have placed him in violation of a media law, a charge he denies.

Future Forward came into last year’s elections thin on actual policy positions, but positioned as an alternative to the bitterly opposed political forces that have duked it out for two decades. Thailand’s toxic political environment has led to dozens of deaths in crackdowns on street protests and given the army excuses to step out of the barracks for coups.

Even when elections were held last year, critics said they were rigged to favor the military. An army-drafted Constitution reserves the entire Senate for appointees, minimizing the power of elected members of the House of Representatives.

Future Forward’s politicians have spoken out against the military’s enduring influence on Thai politics and have called for the defense budget to be slashed. The party has led the charge for a censure motion next week against Mr. Prayuth, the prime minister, and some of his ministers.

Last week, as Thailand reeled from its worst mass shooting in living memory — in which a soldier stole weapons from an army base after an altercation with a superior officer and fatally shot 29 people in a spree that ended at a mall in the northeastern city of Korat — Future Forward again called for military reforms.

A series of opposition political parties have been dissolved in recent years, and dozens of politicians — and their proxies — have been subjected to yearslong bans from politics.

The crackdown on the opposition has also veered into the bloody. Democracy activists have been physically attacked by unknown assailants. Others have been sent to so-called attitude readjustment camps run by the military.

“The ongoing attacks on the political opposition must be seen in the context of the Thai authorities’ continuing surveillance, intimidation, harassment and prosecution of pro-democracy activists, human rights defenders, journalists and individuals criticizing the government since the May 2014 coup,” Amnesty International said in a statement.