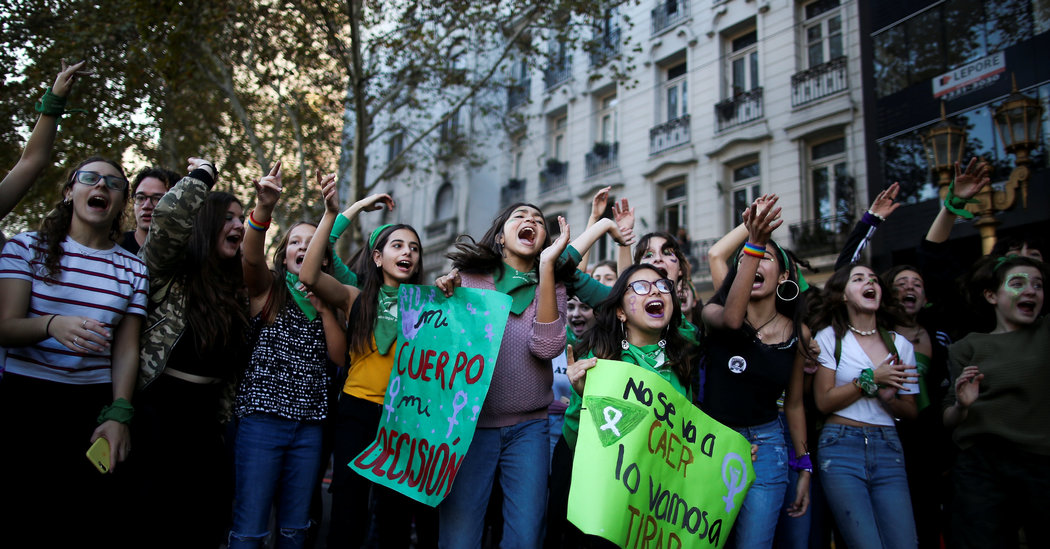 BUENOS AIRES — Abortion rights activists in Argentina have formally started the second round in their effort to advance reproductive rights in the land of Pope Francis, buoyed by the hope that the country’s transformed political landscape will put their goal within reach.

Two years ago, activists organized a powerful grass-roots movement that helped persuade the lower house of Congress to vote in favor of legalizing abortion, but the Senate narrowly voted down the bill.

This year, proponents of legalization have a powerful new ally, President Alberto Fernández, who took office in December and is expected to put forward a bill that would legalize abortion when he opens the legislative session on March 1.

“This is the year when we aren’t discussing abortion yes or abortion no but rather what type of bill will be approved,” said Celeste Mac Dougall, a strong advocate of abortion rights.

The details of Mr. Fernández’s proposal — including the latest stage at which pregnancies could be terminated — have yet to be announced. But tens of thousands of women took to the streets in Argentina on Wednesday to support the bid to do away with the country’s restrictive abortion laws.

Across the country, as they did in 2018, demonstrators waved or wore the green handkerchief that has become synonymous with the abortion rights movement.

“The abortion law is much more than the right to perform an abortion,” said María del Valle Stigliano, 30, a copywriter. “It recognizes women as independent people who have the right to decide over our bodies.”

“The church is never going to be in favor of this and there are people who are always going to be against legalizing abortion, but that doesn’t matter,” Ms. del Valle said. “We need to focus on the people who still haven’t made up their mind. That’s how we’re going to win.”

For Denise Cutuli, a 20-year-old communications student, there is a sense of inevitability to the debate. “Sooner or later, abortion will be law, but the sooner we can get it approved the fewer women who will die from clandestine abortions,” she said. “We aren’t asking for anything crazy. Lots of other countries have already done this and it has shown that the rate of mortality decreases when abortion becomes legal.”

By becoming the first Argentine president to support the legalization of abortion, Mr. Fernández stands to please many in his center-left base when he delivers Argentina’s equivalent of the State of the Union address next month. In making the issue a central theme of the political debate, he might divert attention from Argentina’s grim economic situation as it struggles with negative economic growth amid a soaring debt crisis.

However, it remains a politically risky move that could cost the president the support of his allies in some of Argentina’s most conservative provinces.

“Considering he is trying to take a more orthodox path when it comes to the economy, he is using other issues to calm the demands of his voters,” said Mariel Fornoni, a political analyst who runs Management and Fit, a local polling company. “These types of things allow him to buy time,” she added, warning that it “could also backfire” if the votes did not go his way.

Approval is far from certain. Amnesty International estimates the current vote in the Chamber of Deputies, Argentina’s lower house, at 116 to 108 in favor of legalization, with 33 votes up in the air. In the Senate, Amnesty counts 33 votes in favor of approval, 35 against, with three lawmakers undecided and one on leave.

That points to Mr. Fernández’s role as potentially decisive.

While the vote in Congress remains uncertain, the massive turnout on Wednesday showed the strength and political clout of a grass-roots movement that unexpectedly took center stage two years ago.

In 2018, the president at the time, Mauricio Macri, surprised activists by allowing an abortion debate in Congress, freeing lawmakers to “vote their conscience.” While Mr. Macri did not support legalizing abortion, he promised not to veto the bill if it passed.

The push to legalize abortion stemmed from a broader women’s rights movement that drew enthusiastic support across the political spectrum.

“Argentina was not the same after that debate,” said Brenda Austin, an opposition lawmaker and Macri ally who was one of the main proponents of the 2018 bill. Abortion “used to be a taboo issue in politics and now it’s difficult to find someone who doesn’t have a position.”

Abortion went from an issue that was whispered about among close friends to a topic of debate around dinner tables.

“The social decriminalization has been impressive,” said Mariana Romero, a researcher at the Center for the Study of the State and Society, a nonprofit organization. “People are now talking about abortion and that is a huge change. You see it on the streets, you see it on social networks.”

Several politicians have credited youth-led activism with changing their minds on the issue. Among them was Vice President Cristina Fernández de Kirchner, who praised the “thousands of girls who took to the streets” in 2018, when as a senator she voted in favor of legalization. She had opposed the practice when she was president from 2007 to 2015.

Argentina is one of several countries in Latin America that allow abortion under a few circumstances, including rape and when the life of the mother is in danger. Only three countries in the region — Cuba, Uruguay, and Guyana — have legalized abortion, which is also allowed in parts of Mexico.

In expressing his support for legalizing abortion, Mr. Fernández has characterized it as a public health issue.

Between 2015 and 2018, at least 155 women died of complications from abortions — 16 percent of all maternal deaths, according to the Health Ministry.

Abortion-rights advocates know, however, that just as they have become more organized in the past two years, their opponents also turned out in large numbers to object to legalization in 2018, urged on by Catholic and evangelical churches.

Argentina’s Catholic Church has called for a demonstration on March 8, International Women’s Day, organized around the slogan “Yes to women, Yes to life.”

“We are in a state of alert — this will not catch us by surprise,” said Rubén Proietti, head of the Christian Alliance of Evangelical Churches of the Argentine Republic. “If this initiative of turning abortion into law persists, the evangelical church will once again protest.”

Beyond Argentina, Mr. Proietti says there is concern about what abortion legalization in Argentina could mean for the region.

“We believe there are other countries that are waiting to see what will happen here,” he said.

The potential regional effects of a legalization vote have also raised concerns about the role Pope Francis could play in pushing against the measure. Because of that, activists were relieved when Mr. Fernández reiterated his intention to push for decriminalizing abortion shortly after he met with the pontiff in the Vatican last month. Mr. Fernández said he did not discuss the issue with the pope.

“We are very optimistic,” said Ms. Mac Dougall, the abortion rights advocate, “but we know that our strongest tool to make sure that abortion becomes legal is to take to the streets by the thousands.”